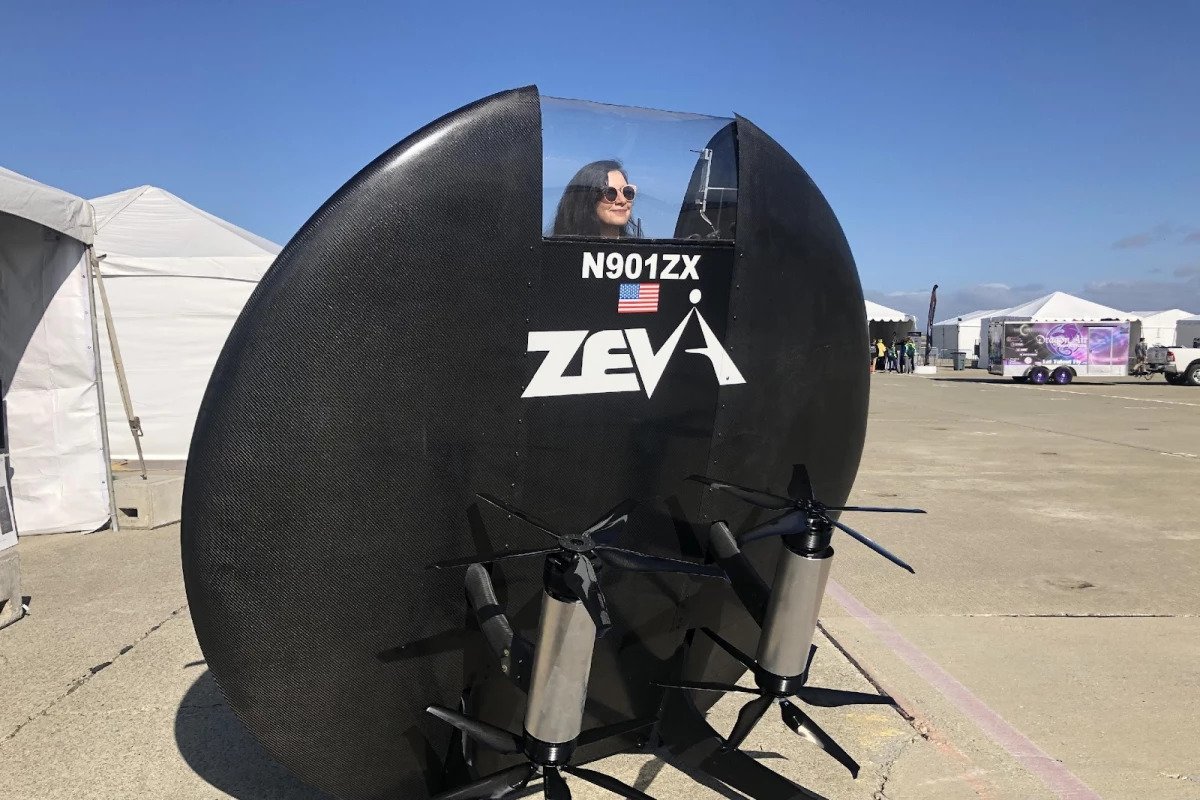 You enter the aircraft through a compound, folding hatch arrangement on the back as it sits on its tail, tilting slightly forward. You rest your chest and belly against it, close the hatch behind you, and then you’re ready to fly. It’ll take off vertically, then transition within about 20 seconds to a horizontal cruise mode in which the entire body disc becomes a lift-generating wing.

The top prop on each nacelle is optimized for VTOL and hover, and the lower one has higher-pitch blades optimized for cruising at faster airspeeds. At a certain speed, the top props will be stopped, unlocked and allowed to fold flat against the nacelle to minimize drag.

You’ll then Superman your way to destinations up to 50 miles (80 km) away at speeds up to 160 mph (257 km/h), at which point it’ll slow down, angle the nose back upward, start up those top hover props again and come in for a tail-sitting landing that plonks you back down on your feet.

Tibbits describes early versions as “optionally piloted,” using a fairly standard set of drone-style controls that’ll take your inputs at the sticks and combine them with other information from cameras and sensors around the aircraft before deciding exactly what needs to happen at the electric motors. Eventually, of course, the goal is to have these things operating autonomously.

Why design an aircraft like this? “Well, keep it simple,” Tibbits smiles. “I think Elon Musk said recently that the best part is no part. I love it. The fewer moving parts, the more reliable it is. This particular design came out of a design session we had going into the Boeing-sponsored GoFly prize. One of the requirements was that the whole aircraft had to fit within an eight-and-a-half-foot (2.6-m) sphere, and we wanted to maximize our wing area within that space.

“But the result, I think, is an interesting product for things like first responder, search and rescue, hot extraction, resupply … We’ve got civil applications and DOD applications, and people are getting pretty excited about it. So yeah, we’re zigging where others are zagging, but my consideration is that where these things are needed, and where they can be used straight away, is not in the urban environment. That’s the last place we’ll put them, once we’ve got thousands of hours up.

“We’re seeing extreme interest in rural areas, and especially in countries like Indonesia. They’ve got 17,000 islands, many of them without much infrastructure at all, and they love the idea of being able to move people around like this. Seventy-three percent of us commute solo, so it makes sense to us that our first vehicle will be designed for a single person – 160 miles an hour with a 50-mile range? That opens up a lot of possibilities.”

So the Zeva will be very mechanically simple – more or less just an octacopter with smarter flight dynamics and a big cruise wing. Tibbits says it’ll be easy to mass-manufacture, too: “we can essentially stamp out composite airframe parts with a big press,” he says, and even before any economies of scale, his team estimates a price around US$250,000 per unit. That means air taxi services could buy 20 of these things for the price of one of the larger five or six seaters.

But perhaps its key advantage will be its size. “We can park six or seven of these in the same space you’d need to park a Joby in,” says Tibbits. “First responders can park several in a garage, ready to fly. Rich guys can have them on their yachts as an efficient way of getting between ship and shore without having to keep a helicopter maintained. And we can land them in much smaller spaces. We can take off and land in a cul-de-sac, or other places where a 35-ft (10.6-m) wingspan is a handicap.”

The Zeva team has been flying a 1/8th scale model through all phases of flight, and it’s a zippy little fella indeed, as you can see in the video below.

Now the company’s got a full-scale prototype built, which is flying “almost daily” on tethers at this point, and should be off tethers and ready to start transition testing in a remote-control configuration “within three or four weeks.” Tibbits says manned flights could be happening “within three to six months, maybe less. Once we demonstrate safe flight, we’ll be categorized as an experimental aircraft, in which case we can begin human flight. Now, I definitely don’t want to jump the gun on that, we’ll need hundreds of hours on the machine before we put a human in it, and we also need to get our ballistic recovery parachute installed and tested rigorously.”

Indeed, Tibbits says the Zeva Aircraft would be easy enough to package up in pre-certification form and sell as an experimental aircraft for holders of private pilot’s licenses. “The idea is on our minds, but I don’t know how it’ll play out,” he says. “We don’t want to take our eye off the ball on the commercial and first responder aspects of it. Those are important, and a good use of the technology.”

If the Zero aircraft doesn’t manage to raise your eyebrows to the maximum safe altitude, then check out Zeva’s SkyDock concept, which would let you dock your aircraft right off your 35th floor office window, park it like a barnacle and walk right in along an extended runway.

“We think that when the UAM space starts to play out, the rooftops are going to be at a premium,” says Tibbits. “The thousand-pound gorillas are going to go in and get all the good rooftop leases early on, and dominate those rooftops with their services. Once everyone’s got access to these things, that’s not going to work. We’re going to need a lot more parking spaces. We don’t know how it’s going to work in real life, but I do believe it’s going to happen.”

Will they come with free brown underpants dispensers? “I mean, that’s one way to put it, but on the other hand, who doesn’t want to Batman off the side of a building?” Tibbits laughs. It’s fair to say, anyone that can’t handle stepping out onto a thousand-foot-high gangplank is probably going to struggle with the face-down flight position anyway. Vertigo sufferers need not apply, but Tibbits points out that those with the cojones to ride face-down in a 160-mph flying saucer will be rewarded with a view that’s second to none.

Zeva is partly self-funded at this point. There’s been a family and friends investment round, and Tibbits says he’s thrown the doors open to small investors through StartEngine, an equity crowdfunding platform. The next step will be getting more prototypes built and tested, with a view to first hitting the market through the first responder, search and rescue and defense markets. “We’ll pivot to the consumer market around the time we have full autonomy working,” says Tibbits.

Curiously, he doesn’t seem at all daunted by the challenge of commercial certification, which some organizations believe will cost up to a billion dollars for early eVTOL aircraft hoping to join the air taxi market. “I have two superpowers: persistence and being able to run programs with very limited budgets,” says Tibbits. “We’ve brought a guy onto the team, ex-Boeing, whose expertise is around flight testing and certification.”

“We’ll have the advantage that we’re not the first or second guys to be doing this,” he continues. “So we’ll be able to ride the coattails of Joby and Beta and so on, to some extent. I think certification is going to be expensive and time consuming, but I don’t think it’ll be in the billion-dollar category. That being said, we do need to raise significant funding to get to that point.”

It’ll be an uphill battle, but we’re fascinated to hear how things pan out for this little electric UFO. In terms of a visceral flying experience, it’ll be pretty hard to beat, and the small-scale prototype looks so quick and agile that it’s easy to imagine the Zero’s potential as some kind of sports-VTOL for racers. We wish the team the best of luck making it happen.

Check out a video below.

How convenient. If the power or motors fail, they won’t even have to transfer you to a coffin.

If you’ve ever wondered what it would be like to a human frisbee…..you’re in luck!

Looks practical to me. It all comes down to the control software at this point for all of these electric mobility concepts, and that is already viable needing only adjustments from real-world flight data to cover all edge-case scenarios. So conceptually, this definitely fills a specific niche.

Saying it’s impractical because it could crash is kind of dumb really. Anything that fails in the sky is not going to end well, even for conventional aircraft. The result is pretty much the same. In fact, probably more safe than most conventional aircraft as only ultra-lites and similar can employ an automatically deployed parachute system that I’m sure this will require as it continues through the certification process.

And also like most conceptual air mobility platforms, it’s success will depend more on piles of investment money and smart program management than technical aspects.

It doesn’t really seem fail-safe. It might require 100.000% reliability of most components.

Another opportunity for the Purple cushion company to make it comfy in there for us? Please add AC, high end audio and a heads up display, can’t wait to fly one of these!

That vehicle has too small of a “wing” for the weight of a human to be entirely aerodynamic at anything short of their top speed. (if then) I doubt it certifies, if they even take it that far.

If a flying saucer was a shape that was easy to control in flight we would have seen them more commonly in the air before now with conventional power sources.