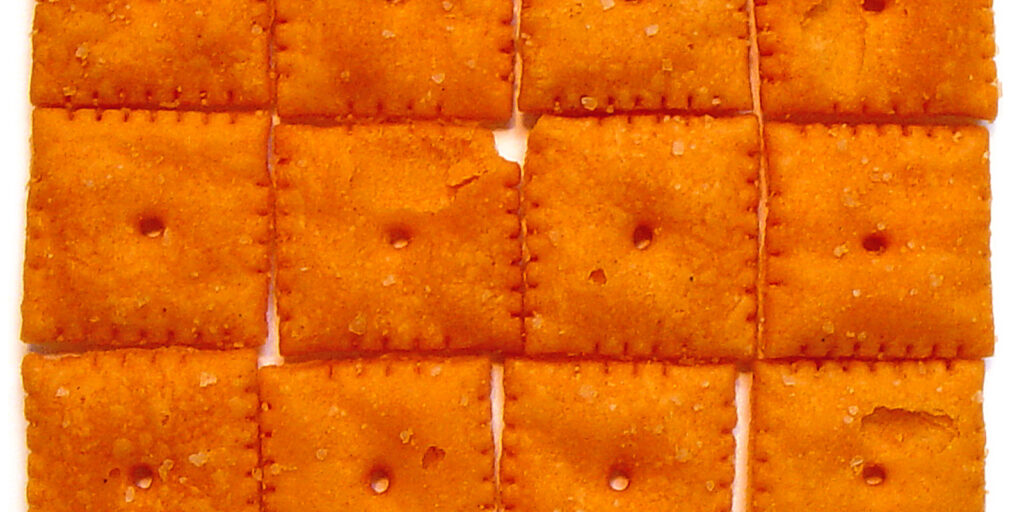 Cheez-It’s 11-month shelf life is impressive, but so is the company’s history. Photo by mikemarschke/Getty Images
–

By Leo DeLuca
Smithsonian Magazine
–
Dayton’s historic Edgemont neighborhood is cocooned inside a crook in the Great Miami River, a winding waterway that snakes through the heart of southwest Ohio. Two miles from downtown, with its air of industry, the community hearkens to a time when Dayton was hailed “The City of A Thousand Factories.”
–
In the early 20th century, inside a foregone factory on the corner of Concord and Cincinnati Streets, Green & Green cracker company cooked up its Edgemont product line, a collection of grahams, crackers and gingersnaps that were shipped across the region. But of the company’s four Edgemont products, only one, in particular, a flaky one-by-one-inch cheese cracker, would revolutionize snack time. On May 23, 1921, when Green & Green decided to trademark the tasty treat’s unique name, the Cheez-It was born.
.

“In 1921, Cheez-It didn’t mean anything, so Green & Green marketed the cracker as a ‘baked rarebit,’ ” says Brady Kress, president & CEO of Dayton’s Carillon Historical Park, a nationally recognized open-air museum centered on the city’s history of innovation. (Inside Carillon Brewing Company, a fully operating 1850s brewery at the park, costumed interpreters still bake crackers over an open hearth.) “People were familiar with rarebit, a sort of melted cheddar beer cheese spread over toast. Cheez-It offered the same great taste, only baked down into a cracker that will last.”

Cheez-It’s 11-month shelf life is impressive, but so is the company’s history. In May 2021, America’s iconic orange cracker turned 100. But the Cheez-It story stretches even further back than that.

In 1841, Dr. William W. Wolf moved to Dayton to practice homeopathy, a branch of alternative medicine that believes in the healing power of food. Hailed Dayton’s “Cracker King,” Wolf concocted the Wolf Cracker, a curious hard-butter snack made for medicinal purposes.

“In the 19th century, crackers were linked to Christian physiology and sectarian medical practitioners,” says Lisa Haushofer, a senior research associate at the University of Zurich’s Institute for Biomedical Ethics and History of Medicine. “Christian physiologists like Sylvester Graham, of Graham Cracker fame, were concerned about a modern diet that contained too many stimulating substances.” (In addition to being a cracker evangelist, Graham was also a pro-temperance Presbyterian minister who preached a vegetarian diet). Wolf echoed Graham’s concerns that food was far too rousing (though Graham also dubiously believed his crackers could cure licentiousness), so he launched the Wolf Cracker Bakery to churn out his wholesome snacks.

“They believed there was too much nourishment per food unit in modern bread, too much excitement,” says Haushofer. “So they recommended grain products made from coarse flour, which, they believed, contained a more natural ratio of nourishing and non-nourishing parts. Crackers were considered health food.”

According to Haushofer, homeopaths at the time were also concerned about digestibility, and since they believed heating food aided digestion, baked Wolf Crackers were just what the doctor ordered. But Wolf’s patients weren’t the only ones after his crackers. What started as a medical remedy soon became a sought-after treat.

In the 1870s, while living on the barren plains of North Dakota, Dayton natives J.W. and Weston Green often longed for a taste of home. “In those days food supplies were both expensive and scarce in that region,” wrote the Dayton Journal Herald in its October 31, 1907, edition, “and the father and son regularly sent back to their old home city, Dayton[,] for those necessities that could not be obtained there. ‘Invariably,’ Mr. Green says, ‘we would include in that order a good supply of … the ‘Wolfe Cracker’ [sic].”

J.W. Green never forgot the savory, buttery, nut-like flavor of Wolf Crackers. In 1897, when Wolf died, Green purchased the Wolf Bakery Company, then enlisted his son, Weston Green, to join him in business. The Greens renamed the enterprise Green & Green Company, and while Wolf’s recipe remained the same, they rebranded the doctor’s famous treat as the “Dayton Cracker.”

By the turn of the 20th century, Dayton held more patents, per capita, than any U.S. city; surrounded by this innovative environment, Green & Green flourished, expanding its operations to nearby Springfield and Lima, and delivering baked goods across southwest Ohio. But soon, the company’s crackers became more than a regional concern. During World War I, Green & Green fired up its ovens for the war effort.

“All our facilities but one little oven that can’t be used for Hard Bread will be speeded up to keep two car loads a day going by express,” read a Green & Green ad in the Dayton Daily News’s July 14, 1918, edition … “that OUR BOYS at the front may have their Fighting Bread.”

Though far less tasty than the Dayton Cracker, Dayton’s Fighting Bread sustained countless soldiers during the Great War. Typically made from salt, flour and water, Hard Bread—also known as hardtack, teeth dullers or jawbreakers—was often soaked in water before being served. If stored improperly, weevils and maggots made Hard Bread their home, prompting soldiers to dub the wartime ration “worm castles.”

“We are mighty glad and proud to be a cog in the big machine that will win the war,” read Green & Green’s ad. However, Doughboys weren’t the only ones helping win the war. “P.S. We could still use a few more women in the packing of Hard Bread.”

After World War I, Green & Green Company sidelined Hard Bread in favor of more flavorful fare. By Armistice Day, the Dayton Cracker (still made with Wolf’s original recipe) had been baked in Dayton for nearly 80 years. But while the hard butter-cracker was a local treasure, customers yearned for a delicate, flakier treat. Soon, Green & Green launched its Edgemont line, and in 1921, unveiled the “baked rarebit,” known as the Cheez-It.

“Welsh Rarebit, at its most basic form, is essentially a cheese sauce spread on toast,” says Rachael Spears, a living history specialist at Dayton’s Carillon Historical Park. “Some 19th-century English recipes specifically call for cheddar cheese. To this day, Cheez-It still advertises 100 percent real cheese, which draws a connection to its rarebit roots.”

But in 1921, Americans needed more than a novel snack. Following the Great War, the global economy dipped, and American wallets were increasingly thin. “Rarebit is a lesson in frugality,” says Kress. “It’s a nutritious dish that doesn’t cost a lot of money. When it’s baked down into a Cheez-It, it becomes a tasty treat. And just like hardtack, if you store it correctly, it will stay for a very long time. You don’t run the risk of it growing weevils.”

In 1915, one pound of Green & Green crackers sold for 10 cents, roughly $2.65 in 2021 dollars. “When Uncle Sam picked men for his army overseas,” read a June 1920 Green & Green ad, “he also picked foods that would keep those picked men robust and healthy—fit for the strenuous duties ahead of them. Just as the crackers for our soldiers kept sweet and fresh in tins, so Edgemont Crackers … keep crisp and creamy in the Family Tin. Ask mother to keep a tin in her pantry.”

Cheez-Its kept Americans fed during the post-war recession, throughout the Roaring Twenties, and at the onset of the Great Depression. But by 1932, Green & Green packed up its last Family Tin and sold the business to Kansas City’s Loose-Wiles Biscuit Company.

“The Cheez-It name has accompanied the baked cracker since its creation in 1921,” says Jeff Delonis, senior director of marketing for Cheez-It. “The original Cheez-It packaging was green and white. In the 1930s, red was introduced into the brand logo, and by the 1940s, the box included the iconic red and yellow-orange colors that remain today. The general shape and look of the cracker has largely stayed the same.”

Cheez-Its may still look the same, but the cracker’s production has soared. Once baked on the corner of Concord and Cincinnati Streets in Dayton’s Edgemont neighborhood, then shipped to regional grocers, Cheez-It sold more than 400 million packages in the U.S. alone in 2020.

“It’s super fun to think about all the cities around the country that were producing foods for local audiences,” says Kress. “Every city had them. Here’s an idea that came out of Dayton, Ohio.”

But “baked rarebit,” once a prevalent idiom used to describe an obscure cracker, has since faded, replaced by the now-ubiquitous term, Cheez-It.

“When you bake a cracker, you roll the dough out thin, kind of like a pie crust,” says Spears. “But at the heart, it’s like a thin, crispy biscuit. When you bite into a Cheez-It, you get those nice layers. Those are the layers that form if you cook it a bit.”

Like the Cheez-It itself, we need only bite into the snack’s history to uncover countless compelling layers.

“Cheez-It is a survivor from a bygone time,” says Kress.

Follow Pocket
–
–
–
(For the source of this, and many other equally intriguing and important articles, please visit: https://getpocket.com/explore/item/a-brief-history-of-the-cheez-it?utm_source=emailsynd&utm_medium=social/)