The ABC News correspondent offers a sobering glimpse of a man unfit to govern and the chaos wreaked by an ego unable to grasp its own ineptitude. 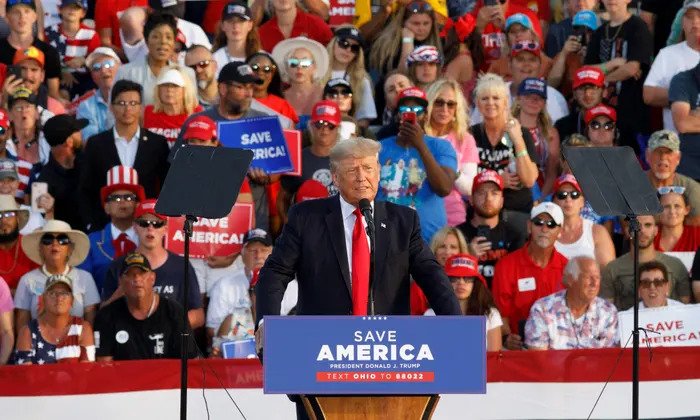 Donald Trump: ‘An existential fraud who admits his unease by referring to himself in the third person.’  Photograph: Stephen Zenner/AFP/Getty
–

By Peter Conrad
Last modified on 2021 Nov 28
–
A statue in the US Capitol honours Clio, the marmoreal muse of history. Floating above the political fray, she rides in a winged chariot that allegorically represents time and has a clock for its wheel. Looking over her shoulder as she writes in a stony ledger, she tracks events in serene retrospect. The journalists who nowadays report on happenings in Washington work at a more frantic, flustered tempo, racing to catch up with the chaos of breaking news.
–
Jonathan Karl, a correspondent for ABC News, seems to be permanently breathless. In Betrayal, he runs for cover during an emergency lockdown at the White House, with grenades detonating in the distance. He is roused after midnight by the announcement of Trump’s Covid diagnosis; later, he has to rush to the hospital, ditch his car and scramble into place before the presidential helicopter lands on a strip of road that is suddenly “the center of the broadcast universe”. And on 6 January Karl keeps up a live commentary as the Capitol is invaded by a mob determined to lynch Vice-President Mike Pence – reviled as a “pussy” by Trump because he refused to overturn Biden’s victory – on a makeshift gallows.
–

The Capitol was designed as a classical temple consecrated to democracy, which is why Clio is at home there: picture the Parthenon on steroids, topped by the dome of Saint Peter’s Basilica. In Betrayal, however, it is the set for a mock-heroic battle between thugs in horned helmets wielding fire extinguishers as weapons and politicians who prepare to fight back with ceremonial hammers torn from display cases and a sword left over from the civil war. Aghast and incredulous, Karl exhausts his supply of synonyms; this final act of the expiring Trump regime is nuts, weird, crazy, kooky and bonkers.

When Karl prods him to denounce the riot at the Capitol, he fondly recalls that ‘magnificently beautiful day’

Worse follows when crackpot conspiracy theorists gather to explain to Trump how the election was rigged. One sleuth contends that wireless thermostats made in China for Google reprogrammed voting machines in Georgia. A shadowy figure called Carlo Goria blames an Italian company and its “advanced military encryption capabilities”; Trump had two government departments investigate this claim, although the picture in Goria’s Facebook profile identifies him as the deranged scientist played by Peter Sellers in Dr Strangelove. Numerous high-level functionaries shiftily justify themselves by telling Karl that the main concern of the administration was to control or at least frustrate its chief executive. During the Black Lives Matter unrest, Trump ordered out the troops to impose martial law on Washington. His wily secretary of defence, Mark Esper, deployed an army unit, but confined it to a fort outside the city. The ruse was a pacifier; rather than calming the streets, Esper’s aim was “to quell the dangerous and dictatorial urgings of his commander in chief”. Our prime minister may be a clown, but for four years the US had an outright lunatic as its president.

Like all reality TV, what Karl calls “the Trump show” is the product of fantasy and fakery; its star is an existential fraud who admits his unease by referring to himself in the third person. “You must hate Trump,” says Trump when Bill Barr, his previously compliant attorney general, rebuffs his lies about a stolen election. He then says: “You must hate Trump” a second time, making it an exhortation as much as an accusation. He can’t command love and suspects that he doesn’t deserve it: will hatred do as a second best? Elsewhere, Trump re-enacts for Karl an exchange with his sullen adolescent son. “Do you love your dad?” he wheedles, as needy as a black hole. “Uh, I don’t know,” grunts Barron. “Too cool,” remarks the paterfamilias, frozen out.

Karl’s anecdotes offer some sharp insights into Trump’s compulsions. He fawns over autocratic thugs such as Putin because he is himself a weakling. While demanding “total domination” of demonstrators outside the White House, he is hustled to safety in a fortified basement, which prompts an internet wit to nickname him “bunker bitch”. As a populist, he cares only about popularity and purchases it with tacky giveaways; while in hospital with Covid, he sends lackeys to distribute “cartons of M&M’s emblazoned with his signature” to the fans outside. When Karl prods him to denounce the riot at the Capitol, he fondly recalls that “magnificently beautiful day” and grumbles that the fake news didn’t give him “credit” for attracting such a large crowd. Negotiating with Karl over his attendance at the White House correspondents’ dinner, where the president usually delivers a jocular speech, Trump asks: “What is the concept? Am I supposed to be funny up there?” Yes, the psychotic shtick of this would-be dictator is dictated by whatever audience he is playing to.

When the counting of electoral votes resumed late at night on 6 January, Karl notes that the senators picked their way into the chamber through splintered wood, shattered glass and a surf of ransacked documents, with the stink of pepper spray lingering in the air; the bust of President Zachary Taylor had been smeared “with a red substance that appeared to be blood”. In a poem about the statue of Clio, President John Adams regretted that she had to listen to “the conflicting jar/ Of ranting, raving parties”. Adams didn’t know the half of it. Perhaps Clio’s marble pallor reflects her state of mind: she must be appalled by what she has recently had to record in her open book.

… we have a small favor to ask. Tens of millions have placed their trust in the Guardian’s high-impact journalism since we started publishing 200 years ago, turning to us in moments of crisis, uncertainty, solidarity and hope. More than 1.5 million readers, from 180 countries, have recently taken the step to support us financially – keeping us open to all, and fiercely independent.

With no shareholders or billionaire owner, we can set our own agenda and provide trustworthy journalism that’s free from commercial and political influence, offering a counterweight to the spread of misinformation. When it’s never mattered more, we can investigate and challenge without fear or favor. We couldn’t do this without readers like you.

Ahead of what is certain to be a pivotal year for America, we’re raising $1.25m to fund our reporting in 2022. If you can, please consider making a year-end gift so that we can continue to deliver journalism that sheds a light on injustice and drives meaningful change. It is reader support that makes our high-impact journalism possible and gives us the emotional support and motor energy to keep doing journalism that matters.

Unlike many others, Guardian journalism is available for everyone to read, regardless of what they can afford to pay. We do this because we believe in information equality.

We aim to offer readers a comprehensive, international perspective on critical events shaping our world – from the crackdown on voting rights to corrosive racial inequality and the erosion of democratic norms. We are committed to upholding our reputation for urgent, powerful reporting on the climate emergency, and made the decision to reject advertising from fossil fuel companies, divest from the oil and gas industries, and set a course to achieve net zero emissions by 2030.

Every contribution, however big or small, powers our journalism and sustains our future. Support the Guardian from as little as $1 – it only takes a minute. Thank you.