In first on-camera interview since accidental film-set shooting, actor says there is only one question: ‘where did the live round come from?’ 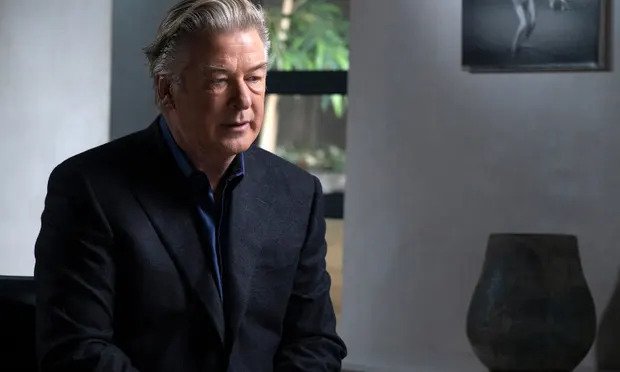 “I would never point a gun at anyone and pull a trigger at them. Never,” said Alec Baldwin of the Rust shooting in an 80-minute ABC interview with George Stephanopoulos.  Photograph: Jeff Neira/ABC/Getty Images
–

By Dani Anguiano and agencies @dani_anguiano
2021 Dec 02
–
Alec Baldwin has questioned how the bullet that accidentally killed cinematographer Halyna Hutchins ended up in a gun on the set of the film Rust, speaking out about the fatal shooting in a lengthy and emotional interview.

The actor said he did not pull the trigger on the gun that killed Hutchins, 42, and injured director Joel Souza, 48. The gun he was holding, which Baldwin believed to be safe, went off during rehearsals for the western, in an incident that shocked Hollywood and prompted a reckoning over production safety and the use of weapons on set.

“There’s only one question to be resolved, and that’s where did the live round come from?” Baldwin said in an ABC interview with George Stephanopoulos that aired Thursday night. The interview was first time the actor has spoken in-depth on camera about the 21 October shooting.

“A live round isn’t supposed to be anywhere near the set,” Baldwin said. “I don’t have anything to hide.”

In a clip from the interview released Wednesday, Stephanopoulos asked Baldwin, who was also a producer on the film, to confirm that the script didn’t call for the trigger to be pulled. “Well, the trigger wasn’t pulled. I didn’t pull the trigger,” Baldwin says.

“So you never pulled the trigger?” Stephanopoulos asks. “No, no, no, no. I would never point a gun at anyone and pull a trigger at them. Never,” Baldwin responded.

The actor said he “let go of the hammer” on the weapon and the gun went off. “I never pulled the trigger,” he said.

Baldwin also described meeting Hutchins’ husband after the shooting, and said he told him he was “willing to do anything I can to cooperate”.

“I didn’t know what to say,” Baldwin said of meeting Matthew Hutchins. “He hugged me and he goes, ‘I suppose we’re going to go through this together.’”

He added, “I think to myself, this little boy [Hutchins’ son Andros] doesn’t have a mother any more … and there’s nothing we can do to bring her back,” Baldwin told Stephanopoulos. “I told him, ‘I don’t know what to say, I don’t know how to convey to you how sorry I am’”.

The Colt .45 revolver was supposed to be loaded with blanks or dummy rounds rather than live rounds, which are banned on set. Baldwin said he had “no idea” how live rounds came to be in the gun.

According to court records, Dave Halls, the film’s assistant director, allegedly called “cold gun” as he passed it over to Baldwin. Hannah Gutiérrez Reed, 24, handled weapons on set, including the gun given to Halls.

Halls told investigators he did not know there were live rounds in the gun before he gave it to Baldwin, according to an affidavit for a search warrant filed by the sheriff’s office on 22 October.

Halls’ attorney, Lisa Torraco, told ABC News that her client has always said Baldwin never pulled the trigger. “He told me since day one he thought it was a misfire,” Torraco said. “Dave has told me since the very first day I met him, that Alec did not pull that trigger.”

In the week after the shooting, attorneys for Gutiérrez Reed said she had “no idea” how live rounds came to be on the set, and blamed producers for an “unsafe” workplace. They said she had lobbied for better safety on the set.

The district attorney in Santa Fe, New Mexico, said in October that criminal charges in the shooting have not been ruled out. “Everything at this point, including criminal charges, is on the table,” Mary Carmack-Altwies told the New York Times. Investigators with the Santa Fe county sheriff’s office are primarily focused on how live rounds came to be in the gun held by Baldwin.

Baldwin and other producers are facing multiple lawsuits over the shooting, including one from the film’s script supervisor that alleges he “intentionally, without just cause or excuse, cocked and fired the loaded gun even though the upcoming scene to be filmed did not call for the cocking and firing of the firearm”.