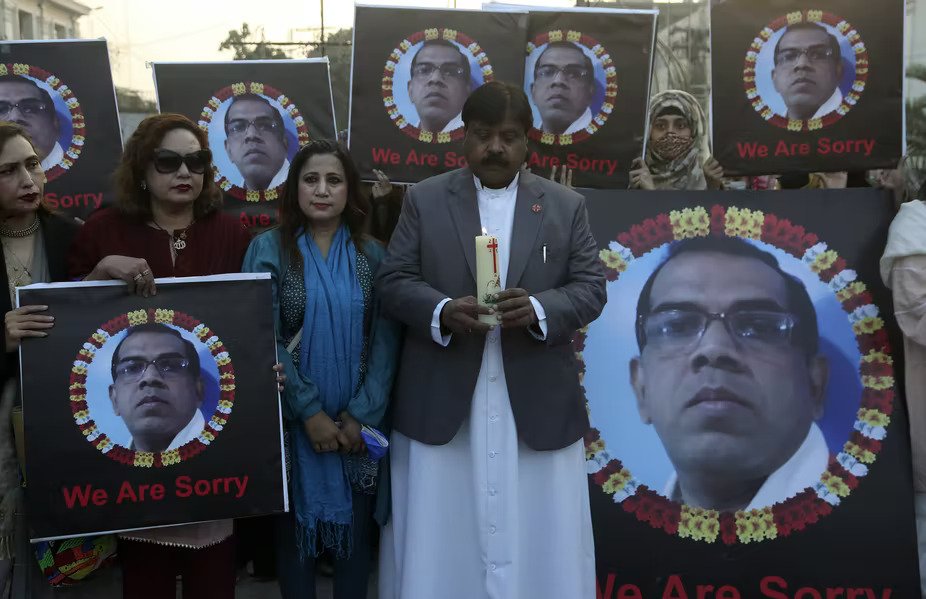 Members of a civil society group participate in a candlelight vigil to pay tribute to the Sri Lankan citizen Priyantha Kumara, who was lynched by a Muslim mob in Pakistan. AP Photo/K.M. Chaudary
–

2021 Dec 10
–
A Sri Lankan working in Pakistan, Priyantha Kumara, was lynched by a mob of hundreds of people on Dec. 3, 2021, over allegations of blasphemy, or sacrilegious act. After being assaulted, he was dragged into the streets and set on fire, and the lynching was recorded and shared widely on social media.

Such tragic killings in Pakistan over blasphemy accusations are not just about extrajudicial vigilantism. Pakistan has the world’s second-strictest blasphemy laws after Iran, according to the U.S. Commission on International Religious Freedom.

In December 2019, Junaid Hafeez, a university lecturer, was sentenced to death by a Pakistani court on the charge of insulting the Prophet Muhammad on Facebook.

Hafeez, whose death sentence is under appeal, is one of about 1,500 Pakistanis charged with blasphemy over the past three decades. No [official] executions have ever taken place.

But since 1990, 70 people have been murdered by mobs and vigilantes over allegations of insulting Islam. Several people who defended the accused were killed, too, including one of Hafeez’s lawyers and two high-level politicians who publicly opposed the death sentence of Asia Bibi, a Christian woman convicted for verbally insulting the Prophet Muhammad. Though Bibi was acquitted in 2019, she fled Pakistan.

Of 71 countries that criminalize blasphemy, 32 are majority Muslim. Punishment and enforcement of these laws vary.

Blasphemy is punishable by death in Iran, Pakistan, Afghanistan, Brunei, Mauritania and Saudi Arabia. Among non-Muslim-majority cases, the harshest blasphemy laws are in Italy, where the maximum penalty is three years in prison.

Half of the world’s 49 Muslim-majority countries have additional laws banning apostasy, meaning people may be punished for leaving Islam. All countries with apostasy laws are Muslim-majority except India. Apostasy is often charged along with blasphemy.

This class of religious laws is quite popular in some Muslim countries. According to a 2013 Pew survey, about 75% of respondents in Southeast Asia, the Middle East and North Africa, and South Asia favor making sharia, or Islamic law, the official law of the land.

Among those who support sharia, around 25% in Southeast Asia, 50% in the Middle East and North Africa, and 75% in South Asia say they support “executing those who leave Islam” – that is, they support laws punishing apostasy with death.

The ulema and the state

My 2019 book “Islam, Authoritarianism, and Underdevelopment” traces the root of blasphemy and apostasy laws in the Muslim world back to a historic alliance between Islamic scholars and government.

Starting around the year 1050, certain Sunni scholars of law and theology, called the “ulema,” began working closely with political rulers to challenge what they considered to be the sacrilegious influence of Muslim philosophers on society.

Muslim philosophers had for three centuries been making major contributions to mathematics, physics and medicine. They developed the Arabic number system used across the West today and invented a forerunner of the modern camera.

The conservative ulema felt that these philosophers were inappropriately influenced by Greek philosophy and Shiite Islam against Sunni beliefs. The most prominent in consolidating Sunni orthodoxy was the respected Islamic scholar Ghazali, who died in the year 1111.

In several influential books still widely read today, Ghazali declared two long-dead leading Muslim philosophers, Farabi and Ibn Sina, as apostates for their unorthodox views on God’s power and the nature of resurrection. Their followers, Ghazali wrote, could be punished with death.

This “ulema-state alliance,” as I call it, began in the mid-11th century in Central Asia, Iran and Iraq, and a century later spread to Syria, Egypt and North Africa. In these regimes, questioning religious orthodoxy and political authority wasn’t merely dissent – it was apostasy.

Parts of Western Europe were ruled by a similar alliance between the Catholic Church and monarchs. These governments assaulted free thinking, too. During the Spanish Inquisition, between the 16th and 18th centuries, thousands of people were tortured and killed for apostasy.

Blasphemy laws were also in place, if infrequently used, in various European countries until recently. Denmark, Ireland and Malta all recently repealed their laws.

But they persist in many parts of the Muslim world.

In Pakistan, the military dictator Zia-ul-Haq, who ruled the country from 1978 to 1988, is responsible for its harsh blasphemy laws. An ally of the ulema, Zia updated blasphemy laws – written by British colonizers to avoid interreligious conflict – to defend specifically Sunni Islam and increased the maximum punishment to death.

From the 1920s until Zia, these laws had been applied only about a dozen times. Since then, they have become a powerful tool for crushing dissent.

Some dozen Muslim countries have undergone a similar process over the past four decades, including Iran and Egypt.

The conservative ulema base their case for blasphemy and apostasy laws on a few reported sayings of the Prophet, known as hadith, primarily: “Whoever changes his religion, kill him.”

But many Islamic scholars and Muslim intellectuals reject this view as radical. They argue that Prophet Muhammad never executed anyone for apostasy, nor encouraged his followers to do so.

Nor is criminalizing sacrilege based on Islam’s main sacred text, the Quran. It contains over 100 verses encouraging peace, freedom of conscience and religious tolerance.

In chapter 2, verse 256, the Quran states, “There is no coercion in religion.” Chapter 4, verse 140 urges Muslims to simply leave blasphemous conversations: “When you hear the verses of God being rejected and mocked, do not sit with them.”

By using their political connections and historical authority to interpret Islam, however, the conservative ulema have marginalized more moderate voices.

Debates about blasphemy and apostasy laws among Muslims are influenced by international affairs.

Across the globe, Muslim minorities – including the Palestinians, Chechens of Russia, Kashmiris of India, Rohingya of Myanmar [Burma] and Uighurs of China – have experienced severe persecution. No other religion is so widely targeted in so many different countries. 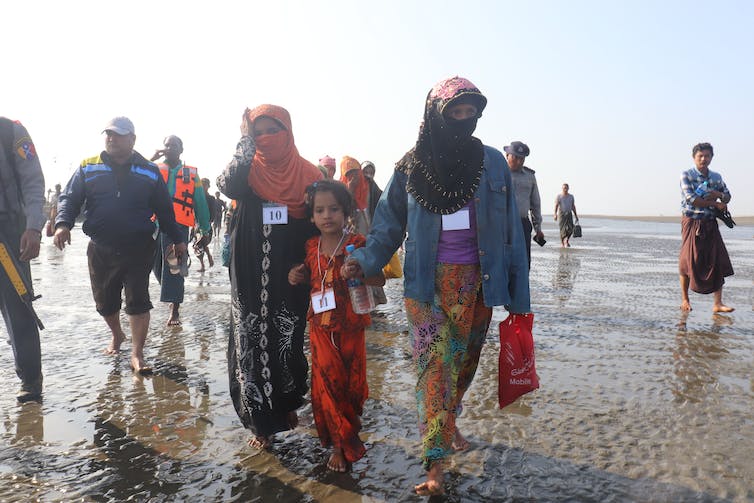 The Rohingya of Myanmar are among several Muslim minorities facing persecution worldwide. Rakhine state, Myanmar, 2020 Jan 13. STR/AFP via Getty Images
–
Alongside persecution are some Western policies that discriminate against Muslims, such as laws prohibiting headscarves in schools.

Such Islamophobic laws and policies can create the impression that Muslims are under siege and provide an excuse that punishing sacrilege is a defense of the faith.

Instead, I find, such harsh religious rules can contribute to anti-Muslim stereotypes. Some of my Turkish relatives even discourage my work on this topic, fearing it fuels Islamophobia.

But my research shows that criminalizing blasphemy and apostasy is more political than it is religious. The Quran does not require punishing sacrilege: authoritarian politics do.

[ Deep knowledge, daily. Sign up for The Conversation’s newsletter.]

This is an updated version of a piece first published on 2020 Feb 20.

Ahmet T. Kuru does not work for, consult, own shares in or receive funding from any company or organization that would benefit from this article, and has disclosed no relevant affiliations beyond his academic appointment.

San Diego State University provides funding as a member of The Conversation US.

Write an article and join a growing community of more than 138,200 academics and researchers from 4,225 institutions.