Opportunism and cowardice has more than sufficed to make Republicans espouse a noxious falsehood as an axiomatic truth. 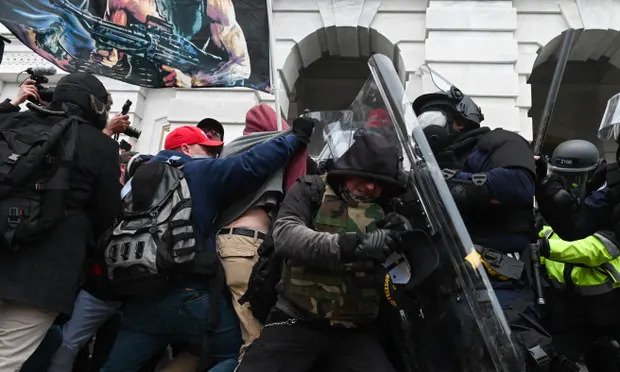 Police push back at pro-Trump mob after they stormed the Capitol building on 6 January. Photograph: Roberto Schmidt/AFP/Getty Images
–

By Lawrence Douglas
Last modified on 2021 Dec 17
–
At hand is a plot to destroy American democracy from within. Its organizers have infiltrated the highest echelons of state and federal government, and have instigated and condoned acts of violence directed against our elected officials. This might sound far-fetched. But the threat is real and the seditious group is none other than the Republican party. Its target is the 2024 presidential election.

Less than a year ago, Donald Trump limped from the White House a badly discredited figure, roundly condemned for having instigated a shocking attack against a coordinate branch of government. The 6 January insurrection seemed like a wake-up call to Republican lawmakers. No longer could they indulge the self-serving story that Trump was simply an uncouth, untraditional president. The reality was stark and undeniable. The president was at heart a petty autocrat, willing to torch democracy to cling to power.

The wake-up call went unheeded. The critical inflection point came during the second impeachment trial, when Republican senators had the opportunity to join Democrats in condemning Trump. And while seven Republican senators voted along with all 50 Democrats to convict, this still left the Senate 10 votes short of the 67 needed to hold Trump to account.

Emblematic of the Republican refusal to reckon was the stance adopted by Mitch McConnell, who only weeks before had lost his position as Senate majority leader. On the floor of the Senate, McConnell delivered a powerful condemnation of Trump – only then to vote to acquit. Insisting that an ex-president was “constitutionally not eligible for conviction”, McConnell cynically overlooked the fact that the purpose of the trial was not to remove Trump from office but to bar him from ever running again. And while McConnell presumably was hoping to mollify the Republican base while keeping Trump himself sidelined, that strategy backfired grandly.

The acquittal served as the first step to Trump’s rapid rehabilitation and the further radicalization of the Republican party. Ten months ago, McConnell castigated Trump for spinning “increasingly wild myths about a reverse landslide election that was being stolen in some secret coup”. Now these same myths have been elevated to first principles of the Republican party, as the party has come to effectively close its doors to those unwilling to lie about the 2020 election. In George Orwell’s 1984, Winston Smith had to be tortured into declaring that 2+2=5. In the case of today’s Republicans, no torture has been necessary. Opportunism and cowardice has more than sufficed to make Republicans across the land espouse a noxious falsehood as an axiomatic truth.

No less ominous has been the whitewashing of the insurrection itself. Ten months ago, McConnell declared the “mob … assault[ed] the Capitol in [Trump’s] name. These criminals were carrying his banners, hanging his flags, and screaming their loyalty to him.” Hardly a day passes without fresh revelations from the House select committee, documenting the shocking steps Trump contemplated in his effort to remain in the White House. Yet despite the intrepid work of Liz Cheney, the larger Republican response has been to distort and suppress the committee’s findings. Paul Gosar, the Arizona congressman who recently posted an animated video that depicted him slashing to death his House colleague Alexandria Ocasio-Cortez, has recast the insurrectionists as patriots. Others, including Wisconsin Senator Ron Johnson, have insisted the attack was a false-flag operation, a conspiracy theory given traction by Tucker Carlson’s three-party series.

Republican state lawmakers have in turn weaponized the lies about the 2020 election and the 6 January insurrection to gain control over the local administration of elections. Bad enough are the 33 laws that have been passed in 19 states designed to make it harder for persons of color to vote. But more disturbing still are the Republican party’s radical efforts to purge officials who resisted Trump’s attempt to subvert the 2020 results and replace them with loyalists who have bought into the big lie. Republican lawmakers in Wisconsin are seeking to eliminate the state’s bipartisan elections commission altogether and to install themselves as the sole arbiter of state election results. And more than a dozen other red states have similarly enacted laws to transform the counting and review of ballots cast into a carefully monitored partisan exercise.

By the time insurrectionists stormed the Capitol on 6 January, the 2020 election was a fait accompli. True, Trump tried desperately to forestall Congress from counting and accepting the duly certified state electoral certificates attesting to Biden’s victory. What ultimately frustrated Trump’s putsch attempt was the fact that election officials in Arizona, Georgia, Wisconsin, Michigan and Pennsylvania had already accurately and honestly reported the results. Many of these officials were Republicans. They acted in simple defense of democracy and were rewarded with death threats, ostracism and now ouster.

Come 2024 these quiet custodians of democracy will have been replaced with loyalists and hacks ready to muddy the waters or supply the votes to secure a Trump win. The 2024 election will not witness a repeat of the events of 6 January. By the time Congress tallies the electoral votes on 6 January 2025, the putsch could be complete. And if it is, it will have been staged in the small offices of the election officials in the key swing states. And it’s all being scripted now.

An erosion of democratic norms. An escalating climate emergency. Corrosive racial inequality. A crackdown on the right to vote. Rampant pay inequality. America is in the fight of its life. We’re raising $1.25m to fund our reporting in 2022. If you can, please make a year-end gift today.

With no shareholders or billionaire owner, we can set our own agenda and provide trustworthy journalism that’s free from commercial and political influence, offering a counterweight to the spread of misinformation. When it’s never mattered more, we can investigate and challenge without fear or favor. It is reader support that makes our high-impact journalism possible and gives us the emotional support and motor energy to keep doing journalism that matters.

Every contribution, however big or small, powers our journalism and sustains our future. Support the Guardian from as little as $1 – and it only takes a minute. Thank you.