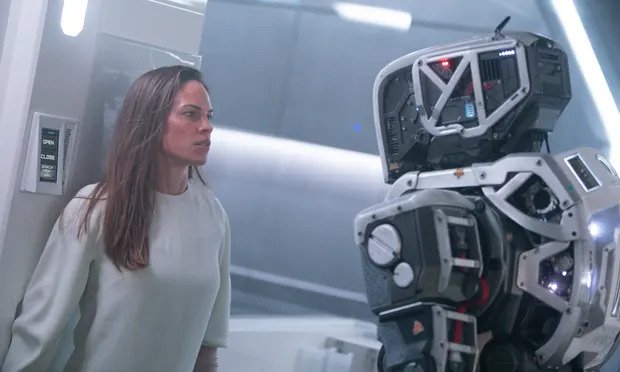 Hilary Swank in AI thriller I Am Mother (2019). Photograph: Netflix
–

Forget about the danger of robots creating a sci-fi-style dystopia. The modern corporation is already doing all of that.
In the first of his four (stunning) Reith lectures on living with artificial intelligence, Prof Stuart Russell, of the University of California at Berkeley, began with an excerpt from a paper written by Alan Turing in 1950. Its title was Computing Machinery and Intelligence and in it Turing introduced many of the core ideas of what became the academic discipline of artificial intelligence (AI), including the sensation du jour of our own time, so-called machine learning.
–
From this amazing text, Russell pulled one dramatic quote: “Once the machine thinking method had started, it would not take long to outstrip our feeble powers. At some stage therefore we should have to expect the machines to take control.” This thought was more forcefully articulated by IJ Good, one of Turing’s colleagues at Bletchley Park: “The first ultra-intelligent machine is the last invention that man need ever make, provided that the machine is docile enough to tell us how to keep it under control.”
–
Russell was an inspired choice to lecture on AI, because he is simultaneously a world leader in the field (co-author, with Peter Norvig, of its canonical textbook, Artificial Intelligence: A Modern Approach, for example) and someone who believes that the current approach to building “intelligent” machines is profoundly dangerous. This is because he regards the field’s prevailing concept of intelligence – the extent that actions can be expected to achieve given objectives – as fatally flawed.

AI researchers build machines, give them certain specific objectives and judge them to be more or less intelligent by their success in achieving those objectives. This is probably OK in the laboratory. But, says Russell, “when we start moving out of the lab and into the real world, we find that we are unable to specify these objectives completely and correctly. In fact, defining the other objectives of self-driving cars, such as how to balance speed, passenger safety, sheep safety, legality, comfort, politeness, has turned out to be extraordinarily difficult.”

That’s putting it politely, but it doesn’t seem to bother the giant tech corporations that are driving the development of increasingly capable, remorseless, single-minded machines and their ubiquitous installation at critical points in human society.

This is the dystopian nightmare that Russell fears if his discipline continues on its current path and succeeds in creating super-intelligent machines. It’s the scenario implicit in the philosopher Nick Bostrom’s “paperclip apocalypse” thought-experiment and entertainingly simulated in the Universal Paperclips computer game. It is also, of course, heartily derided as implausible and alarmist by both the tech industry and AI researchers. One expert in the field famously joked that he worried about super-intelligent machines in the same way that he fretted about overpopulation on Mars.

But for anyone who thinks that living in a world dominated by super-intelligent machines is a “not in my lifetime” prospect, here’s a salutary thought: we already live in such a world! The AIs in question are called corporations. They are definitely super-intelligent, in that the collective IQ of the humans they employ dwarfs that of ordinary people and, indeed, often of governments. They have immense wealth and resources. Their lifespans greatly exceed that of mere humans. And they exist to achieve one overriding objective: to increase and thereby maximise shareholder value. In order to achieve that they will relentlessly do whatever it takes, regardless of ethical considerations, collateral damage to society, democracy or the planet.

One such super-intelligent machine is called Facebook. And here to illustrate that last point is an unambiguous statement of its overriding objective written by one of its most senior executives, Andrew Bosworth, on 2016 Jun 18: “We connect people. Period. That’s why all the work we do in growth is justified. All the questionable contact importing practices. All the subtle language that helps people stay searchable by friends. All of the work we have to do to bring more communication in. The work we will likely have to do in China some day. All of it.”

What I’ve been reading

Pick a side
There Is no “Them” is an entertaining online rant by Antonio García Martínez against the “othering” of west coast tech billionaires by US east coast elites.

Vote of confidence?
Can Big Tech Serve Democracy? is a terrific review essay in the Boston Review by Henry Farrell and Glen Weyl about technology and the fate of democracy.

Following the rules
What Parking Tickets Teach Us About Corruption is a lovely post by Tim Harford on his blog.

but you can still support us
$1,280,061
contributions
–
An erosion of democratic norms. An escalating climate emergency. Corrosive racial inequality. A crackdown on the right to vote. Rampant pay inequality. America is in the fight of its life. We’re raising $1.25m to fund our reporting in 2022. If you can, please make a year-end gift today.

With no shareholders or billionaire owner, we can set our own agenda and provide trustworthy journalism that’s free from commercial and political influence, offering a counterweight to the spread of misinformation. When it’s never mattered more, we can investigate and challenge without fear or favor. It is reader support that makes our high-impact journalism possible and gives us the emotional support and motor energy to keep doing journalism that matters.

Every contribution, however big or small, powers our journalism and sustains our future. Support the Guardian from as little as $1 – and it only takes a minute. Thank you.