Amenhotep I ‘unwrapped’ digitally by Cairo scientists, revealing details from his grave jewellery to his teeth. 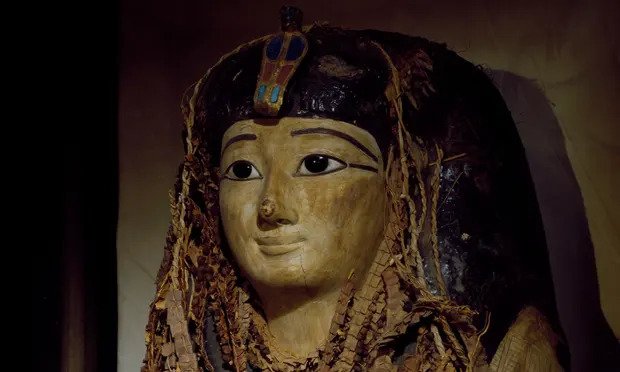 The sarcophagus of Amenhotep I, who ruled Egypt between roughly 1525 and 1504 BC.  Photograph: De Agostini Picture Library/Getty Images
–

With his narrow chin, small nose and curly hair he physically resembles his father, said radiologist Sahar Saleem. Perhaps surprisingly for someone who lived about 3,500 years ago, he also has strikingly good teeth.

Saleem is talking about the mummified body of the pharaoh Amenhotep I, a warrior king who has been something of an enigma in that he is one of the few royal mummies not to be unwrapped in modern times.

Until now, that is. Saleem, a professor of radiology in the faculty of medicine at Cairo University, is part of a team which has successfully unwrapped Amenhotep I, not physically but digitally.

The results, using 3D computed tomography (CT) scanning technology, are unprecedented and fascinating. They provide details about his appearance and the lavishness of the jewellery he was buried with.

“We show that Amenhotep I was approximately 35 years old when he died,” Saleem said. “He was approximately 169cm tall [5ft 6in], circumcised, and had good teeth. Within his wrappings, he wore 30 amulets and a unique golden girdle with gold beads.

“Amenhotep I seems to have physically resembled his father … he had a narrow chin, a small narrow nose, curly hair, and mildly protruding upper teeth.”

Saleem is lead author of a study published recently in the journal Frontiers in Medicine.

She said the fact his teeth were so good was testament to how “amazing” the mummification process was. “Mummified bodies were well preserved. Even the tiny bones inside the ears were preserved. No doubt Amenhotep’s teeth were well-preserved. Many royal mummies had bad teeth, but Amenhotep I had good teeth.”

Amenhotep I was the second king of the 18th dynasty and ascended to the throne after the death of his father, Ahmose I. He ruled Egypt for about 21 years between roughly 1525 and 1504 BC.

His name means “Amun is satisfied”. His throne name was Djeserkare – “Holy is the Soul of Re” – and he is seen as having a peaceful reign which allowed him time to concentrate on administrative organisation and the building of temples. He may have co-reigned with his mother, Ahmose-Nefertari.

Egyptologists know from decoded hieroglyphics that Amenhotep was unwrapped by priests in the 11th century BC – during the 21st dynasty – in order to repair damage done by tomb robbers.

It had also been speculated that they unwrapped him in order to reuse royal burial equipment or steal ornaments. Saleem said their findings debunked those theories and showed the priests had the best of intentions.

The original tomb of Amenhotep I has never been found. He was discovered in 1881 at a site in Luxor where it is known officials of the 21st dynasty hid the mummies of kings and nobles in order to protect them from tomb robbers.

His home is the Egyptian Museum in Cairo. He has not been unwrapped because of the “perfect” linen wrappings covered by garlands of delphiniums, Egyptian riverhemp and safflowers, and the beauty of his painted burial mask.

When the coffin was first opened a preserved wasp was found, probably attracted by the smell of the garlands.

The research team has discovered Amenhotep’s brain is intact, unlike other kings including Tutankhamun and Ramses II.

Saleem said the project had been an exciting one, “like unwrapping a gift”.

The team had been hoping to find evidence of how Amenhotep died but that has proved elusive.

“We couldn’t find any wounds or disfigurement due to disease to justify the cause of death, except numerous mutilations postmortem, presumably by grave robbers after his first burial,” said Saleem. “His entrails had been removed by the first mummifiers, but not his brain or heart.

“We show that at least for Amenhotep I, the priests of the 21st dynasty lovingly repaired the injuries inflicted by the tomb robbers, restored his mummy to its former glory, and preserved the magnificent jewellery and amulets in place.”