A film about a comet hurtling towards Earth and no one is doing anything about it? Sounds exactly like the climate crisis. 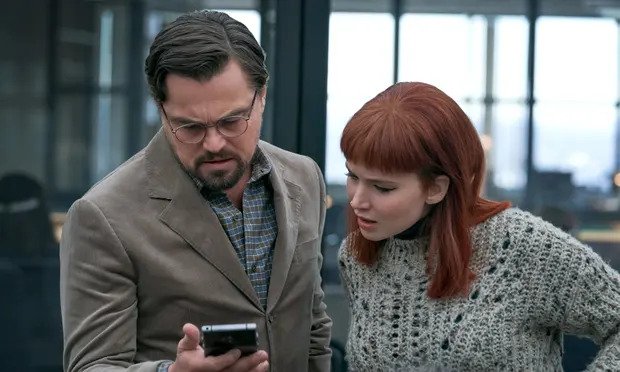 ‘The Earth system is breaking down now with breathtaking speed.’ Photograph: Niko Tavernise/Netflix/PA
–

–
The movie Don’t Look Up is satire. But speaking as a climate scientist doing everything I can to wake people up and avoid planetary destruction, it’s also the most accurate film about society’s terrifying non-response to climate breakdown I’ve seen.

The film, from director Adam McKay and writer David Sirota, tells the story of astronomy grad student Kate Dibiasky (Jennifer Lawrence) and her PhD adviser, Dr Randall Mindy (Leonardo DiCaprio), who discover a comet – a “planet killer” – that will impact the Earth in just over six months. The certainty of impact is 99.7%, as certain as just about anything in science.

The scientists are essentially alone with this knowledge, ignored and gaslighted by society. The panic and desperation they feel mirror the panic and desperation that many climate scientists feel. In one scene, Mindy hyperventilates in a bathroom; in another, Dibiasky, on national TV, screams “Are we not being clear? We’re all 100% for sure gonna fucking die!” I can relate. This is what it feels like to be a climate scientist today.

The two astronomers are given a 20-minute audience with the president (Meryl Streep), who is glad to hear that impact isn’t technically 100% certain. Weighing election strategy above the fate of the planet, she decides to “sit tight and assess”. Desperate, the scientists then go on a national morning show, but the TV hosts make light of their warning (which is also overshadowed by a celebrity breakup story).

By now, the imminent collision with comet Dibiasky is confirmed by scientists around the world. After political winds shift, the president initiates a mission to divert the comet, but changes her mind at the last moment when urged to do so by a billionaire donor (Mark Rylance) with his own plan to guide it to a safe landing, using unproven technology, in order to claim its precious metals. A sports magazine’s cover asks, “The end is near. Will there be a Super Bowl?”

But this isn’t a film about how humanity would respond to a planet-killing comet; it’s a film about how humanity is responding to planet-killing climate breakdown. We live in a society in which, despite extraordinarily clear, present, and worsening climate danger, more than half of Republican members of Congress still say climate change is a hoax and many more wish to block action, and in which the official Democratic party platform still enshrines massive subsidies to the fossil fuel industry; in which the current president ran on a promise that “nothing will fundamentally change”, and the speaker of the House dismissed even a modest climate plan as “the green dream or whatever”; in which the largest delegation to Cop26 was the fossil fuel industry, and the White House sold drilling rights to a huge tract of the Gulf of México after the summit; in which world leaders say that climate is an “existential threat to humanity” while simultaneously expanding fossil fuel production; in which major newspapers still run fossil fuel ads, and climate news is routinely overshadowed by sports; in which entrepreneurs push incredibly risky tech solutions and billionaires sell the absurdist fantasy that humanity can just move to Mars.

World leaders underestimate how rapid, serious and permanent ecological breakdown will be if humanity fails to mobilize
–

After 15 years of working to raise climate urgency, I’ve concluded that the public in general, and world leaders in particular, underestimate how rapid, serious and permanent climate and ecological breakdown will be if humanity fails to mobilize. There may only be five years left before humanity expends the remaining “carbon budget” to stay under 1.5C of global heating at today’s emissions rates – a level of heating I am not confident will be compatible with civilization as we know it. And there may only be five years before the Amazon rainforest and a large Antarctic ice sheet pass irreversible tipping points.

The Earth system is breaking down now with breathtaking speed. And climate scientists have faced an even more insurmountable public communication task than the astronomers in Don’t Look Up, since climate destruction unfolds over decades – lightning fast as far as the planet is concerned, but glacially slow as far as the news cycle is concerned – and isn’t as immediate and visible as a comet in the sky.

Given all this, dismissing Don’t Look Up as too obvious might say more about the critic than the film. It’s funny and terrifying because it conveys a certain cold truth that climate scientists and others who understand the full depth of the climate emergency are living every day. I hope that this movie, which comically depicts how hard it is to break through prevailing norms, actually helps break through those norms in real life.

I also hope Hollywood is learning how to tell climate stories that matter. Instead of stories that create comforting distance from the grave danger we are in via unrealistic techno fixes for unrealistic disaster scenarios, humanity needs stories that highlight the many absurdities that arise from collectively knowing what’s coming while collectively failing to act.

We also need stories that show humanity responding rationally to the crisis. A lack of technology isn’t what’s blocking action. Instead, humanity needs to confront the fossil fuel industry head on, accept that we need to consume less energy, and switch into full-on emergency mode. The sense of solidarity and relief we’d feel once this happens – if it happens – would be gamechanging for our species. More and better facts will not catalyze this sociocultural tipping point, but more and better stories might.

An erosion of democratic norms. An escalating climate emergency. Corrosive racial inequality. A crackdown on the right to vote. Rampant pay inequality. America is in the fight of its life. If you can, please make a gift today to fund our reporting in 2022.

With no shareholders or billionaire owner, we can set our own agenda and provide trustworthy journalism that’s free from commercial and political influence, offering a counterweight to the spread of misinformation. When it’s never mattered more, we can investigate and challenge without fear or favor. It is reader support that makes our high-impact journalism possible and gives us the energy to keep doing journalism that matters.

With help from our readers, we have already beat our year-end fundraising goal. We raised more than $1.25m to fund our journalism in 2022 – what is certain to be a pivotal year for America. Every contribution, however big or small, powers our journalism and sustains our future. Support the Guardian from as little as $1 – and it only takes a minute. Thank you.

How can Britain become a ‘great cycling nation’ when it’s so scary to ride a bike?

I’ve been lied about and others get death threats. Covid has shown the power of misinformation