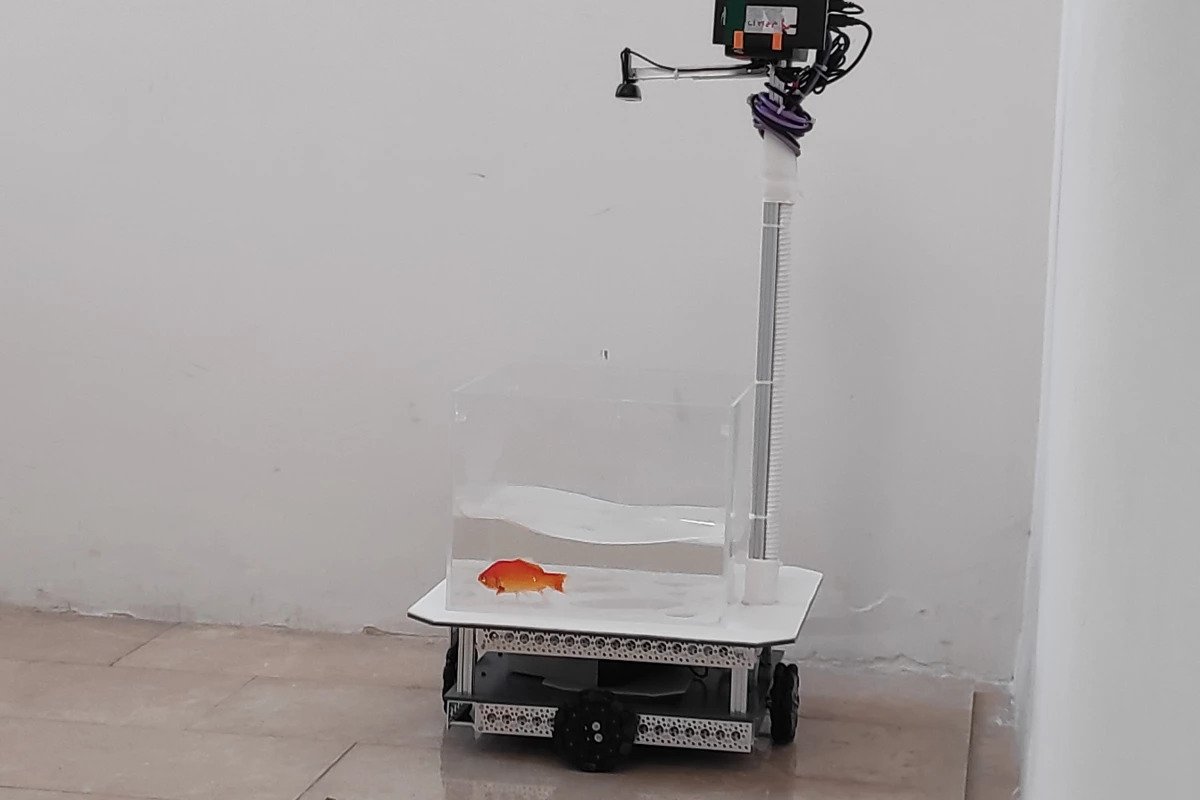 A goldfish “takes the wheel” of the Fish Operated Vehicle.  Ben-Gurion University of the Negev

The research was conducted by scientists at Israel’s Ben-Gurion University of the Negev, and involved a contraption known as the Fish Operated Vehicle (FOV).

This took the form of a 35 x 35 x 28-cm (13.8 x 13.8 x 11-in) acrylic water-filled tank, mounted on a metal platform equipped with four battery-powered omnidirectional wheels. The fish’s position within the tank was monitored by a microcomputer-connected downward-facing camera, which was mounted on the end of a pole extending up from the FOV.

The study utilized six goldfish, each one of which was separately placed within the vehicle. It was in turn located in the middle of a rectangular 3 x 4-m (9.8 x 13.1-ft) enclosure, one wall of which was adorned with a colored polypropylene board. The fish were initially shown that being at the board resulted in a food pellet being dispensed into the tank.

In order to subsequently get to the board on their own, however, the goldfish essentially had to drive the FOV. Within a few days they learned that going to the board-end of the tank, then facing forward while swimming to one side or the other, caused the FOV to move in that direction – facing back toward the middle of the tank caused the vehicle to stop.

Even when the target was moved to different walls, when partial barriers were placed between it and the FOV, or when distracting items were placed on other walls, the fish still managed to navigate their way over to it.

“The study hints that navigational ability is universal rather than specific to the environment,” says PhD student Shachar Givon. “Second, it shows that goldfish have the cognitive ability to learn a complex task in an environment completely unlike the one they evolved in. As anyone who has tried to learn how to ride a bike or to drive a car knows, it is challenging at first.”

A paper on the research was recently published in the journal Behavioural Brain Research. And we’re told that the study is unrelated to Fish on Wheels, an unsuccessful Kickstarter project that involved a FOV-like vehicle which would allow people’s pet goldfish to randomly roam their homes.

Source: Ben-Gurion University of the Negev

Ben Coxworth
Based out of Edmonton, Alberta, Canada, Ben Coxworth has been writing for New Atlas since 2009 and is presently Managing Editor for North America. An experienced freelance writer, he previously obtained an English BA from the University of Saskatchewan, then spent over 20 years working in various markets as a television reporter, producer and news videographer. Ben is particularly interested in scientific innovation, human-powered transportation, and the marine environment.
–