Convicted murderer Gioacchino Gammino tracked down in Galapagar, where he had lived undetected for 20 years. 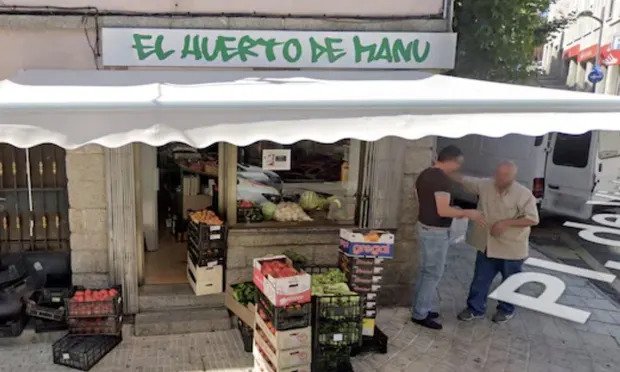 Gioacchino Gammino was living under a new name in Spain, where he worked as a chef.  Photograph: Google Maps
–

By Angela Giuffrida
2022 Jan 05
–
An Italian mafia boss on the run for 20 years was tracked down to a Spanish town after being spotted on Google Street View.
–

Gioacchino Gammino, a convicted murderer listed among Italy’s most wanted gangsters, was arrested in Galapagar, a town near Madrid, where over the years he had married, changed his name to Manuel, worked as a chef and owned a fruit and vegetable shop.

Sicilian police carried out several investigations in their search for Gammino, 61, and a European arrest warrant was issued in 2014. The fugitive was traced to Spain, but it was Google Street View that helped to pinpoint his precise location.

The navigation tool, accessible through Google Maps, had captured an image of two men chatting outside a fruit and vegetable shop called El Huerto de Manu, or Manu’s Garden, in Galapagar. Police believed one of the men closely resembled Gammino, but his identity was only confirmed when they came across a listing for a nearby restaurant called La Cocina de Manu or Manu’s Kitchen.

The shop and the restaurant are now closed, but the police found a photo of Gammino, dressed in his chef’s garb, on a still-existing Facebook page for La Cocina de Manu. He was recognizable by the scar on the left side of his chin. The restaurant’s menu included a dish called Cena Siciliana or Sicilian dinner.

Gammino was arrested on 17 December but the details surrounding his capture did not come to light until they were reported by La Repubblica on Wednesday.

The details were confirmed by the Palermo prosecutor Francesco Lo Voi, who led the latest investigation. “It’s not as if we spend our days wading through Google Maps to find fugitives,” he told the Guardian. “There were many previous and long investigations, which led us to Spain. We were on a good path, with Google Maps helping to confirm our investigations.”

After 20 years in hiding, Gammino thought he had managed to sever all his ties with Sicily. Upon his arrest, he reportedly told police: “How did you find me? I haven’t even called my family for 10 years!”

Gammino belonged to a mafia clan in Agrigento, Sicily, which was caught up in a bloody feud with Cosa Nostra, Sicily’s main mafia network, in the 1990s. He was first arrested in 1984, when he was investigated by the anti-mafia judge Giovanni Falcone, who was assassinated by the mafia in a car bomb in 1992.

Gammino was wanted for murder and various other mafia-related crimes. He was arrested for a second time in Barcelona in 1998. He had been serving a life sentence at Rebibbia prison in Roma when, in 2002, he managed to escape during the commotion of the making of a film at the prison.

It is not the first time a mafia fugitive has been caught with the help of the web. In March last year, Mark Feren Claude Biart was captured in the Caribbean after appearing in YouTube cooking videos. Biart had been on the run since 2014, when Italian prosecutors ordered his arrest for trafficking cocaine in the Netherlands on behalf of the Cacciola clan of the ’Ndrangheta mafia.

Until his arrest, Biart had been leading a quiet life among the Italian expat community in Boca Chica in the Dominican Republic. Although the YouTube videos of him flaunting his cooking skills never showed his face, police said he was betrayed by the distinctive tattoos on his body.

In 2019, police arrested a mobster with the Camorra mafia organization while he was eating pasta with his two cats sitting beside him in an apartment in the outskirts of Napoli.