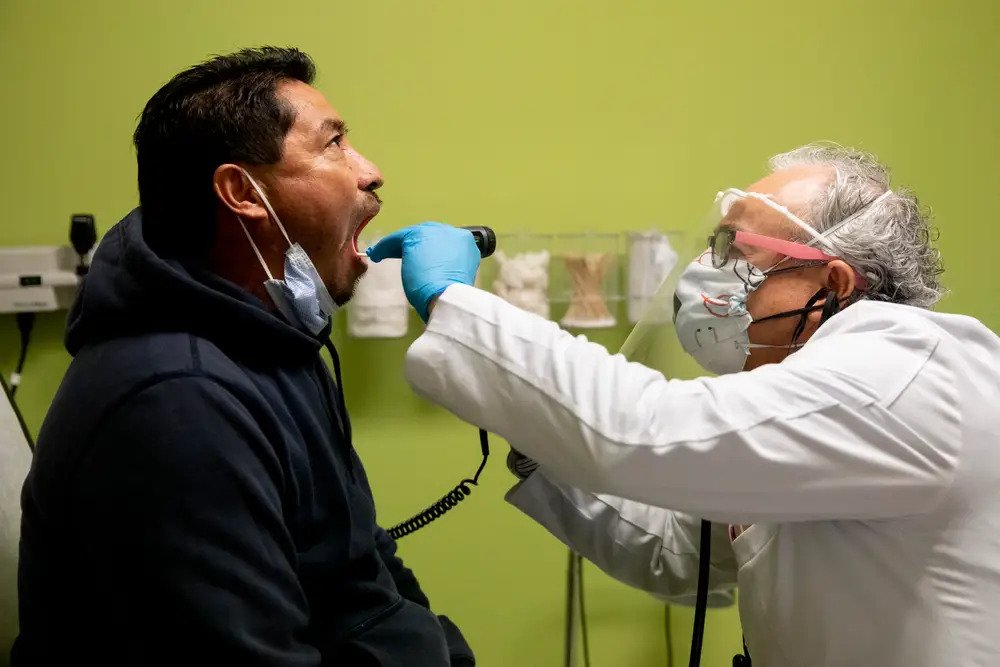 –
At the end of December, Dr. Jorge Moreno and his colleagues were monitoring five COVID-19 patients per day at their outpatient clinic in Connecticut. Then last week, “things exploded,” Moreno said. The clinic had nearly 100 COVID-19 patients as of Monday, he said, driven largely by the rapid spread of the Omicron variant.

Many of those new patients reported the same ailment: a dry, sore throat that caused sharp pain when they swallowed and seemed to appear before most other COVID-19 symptoms.

“It’s a very prominent symptom,” Moreno, an assistant professor of medicine at Yale School of Medicine, told Insider. “It’s not like a little tickle in the throat. If they’re reporting it, they’re saying that their throat feels raw.”

Data from the Zoe COVID Symptom Study, which uses a smartphone app to log how hundreds of thousands of people are feeling every day across the UK, suggests that sore throats are a common, early symptom of Omicron. In a video on December 22, the study’s principal investigator, Tim Spector, said around 57% of people with Omicron reported sore throats.

An analysis of an Omicron outbreak at a Christmas party in Norway found that 72% of infected people developed a sore throat, which lasted about three days, on average. Most of the infected people were vaccinated with two doses of an mRNA vaccine.

Moreno said most patients at his clinic are vaccinated, which explains why their symptoms tend to be milder and relatively short-lived.

“You see this gradient and you can tell how they’re doing based on what their vaccination status is,” Moreno said. For people who’ve been boosted, “it’s almost like an old cold — the sinus symptoms, the sore throat,” he said. “A couple days later, they’re ready to go back to exercising or doing their regular activity.”

Though sore throats were common among vaccinated people with Delta infections, the symptom appears even more prevalent with Omicron.

“One of the things we know with Omicron is that it seems to have a different set of symptoms as opposed to other variants,” Dr. Andy Pekosz, a virologist at the Johns Hopkins Bloomberg School of Public Health, told Insider.

“Most notably, loss of smell was something that many people used to report with COVID-19 symptom onset,” he said. “With Omicron, that doesn’t seem to be reported much at all. Conversely, [there’s] much more talk about coughs and scratchy throats with Omicron.”

Some disease experts have suggested that Omicron could infect the throat before it infects the nose, whereas other variants preferred to set up camp in the nasal passage first.

“When you hear the same anecdotes from people that say a lot of them have a scratchy throat, it is probably because that’s where the highest concentration of the virus is at that point,” Irene Petersen, an epidemiology professor at University College London, told Insider.

A small study released Wednesday by a team of US researchers found that the viral load from an Omicron infection peaked in saliva one to two days before it peaked in nasal swabs, which may explain why adding a throat swab to a rapid test could increase its accuracy.

NOW WATCH: 10 questions about the Omicron variant — including its symptoms and spread — answered by an expert

* Copyright © 2022 Insider Inc. All rights reserved. Registration on or use of this site constitutes acceptance of our Terms of Service and Privacy Policy.
–
–
–
(For the source of this, and many other equally intriguing and important articles, please visit: https://www.businessinsider.com/sore-throat-early-symptom-omicron-covid-variant-2022-1?amp/)