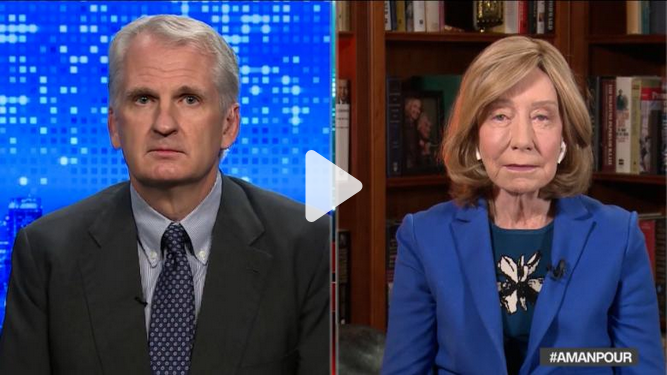 Analysis by Zachary B. Wolf, CNN
Updated 2022 Jan 08
–
A version of this story appeared in CNN’s What Matters newsletter. To get it in your inbox, sign up for free here.

(CNN) After a week of urgent warnings about the state of American democracy, there were several requests in the What Matters inbox for something more useful than a warning.

What’s the average citizen supposed to do about it?

I asked a politician, an activist and a professor who studies democracy. And there were some interesting thoughts from Karl Rove, too.
–

Barbara Walter is a professor at the University of California San Diego and has a new book out, “How Civil Wars Start and How to Stop Them.”

She’s among those who have warned the country’s democracy is in a dangerous place.

When I asked her what everyday Americans could do to protect democracy, she sent back a thoughtful and lengthy email, which I’ll boil down to a few key points.

Vote. Even in presidential elections, there are millions of Americans not taking part in the democratic process. The share of nonvoters is even larger in midterm elections, and larger still at the local level.

“If they voted it would perhaps change the makeup of Congress and break the minority’s hold on power in many places,” Walter said.

Protest. Walter pointed to research from Harvard University and argued that nonviolent protest is an effective tool for change.

“It would be very, very hard for politicians to refuse to reform our democracy if even 3 percent of Americans continued to protest in the street until changes were made,” Walter said. “Americans did that during the civil rights era, when citizens demanded equal rights and freedoms for African Americans, and the government responded, satisfying a desire for equity and justice.”

Connect. It’s this last thought that caught my attention. Walter shared an excerpt from her book in which she argues Americans need to reclaim and mediate public discourse so we can “get off the path of self-segregating, predatory factionalism and restore hope in the long-term health of our country.” She offered examples of local groups across the country trying to get people talking to each other.

“Americans have begun to realize how fragile our democracy is and take action to preserve it,” Walter said. “It is at the local level—in churches, voluntary associations, and grassroots groups—that we can once again come together and relearn the power of citizenship and community.”
–

There are plenty of activist groups looking to bring more Americans into the political process. RepresentUs is a group that vows to fight corruption at the federal level and enact laws at the local level.

It is pushing for the national voting standard that Democrats are trying to figure out how to pass through the Senate.

“Keep informed with multiple credible news sources, and participate in the conversations happening in your community,” RepresentUS CEO Joshua Graham Lynn told me in an email.

There are plenty of reports on the kinds of civil servants, poll workers and volunteers who make democracy run being targeted and quitting.

“If you see your local election officials, school boards, poll workers and other guardians of democracy under attack, show up to support them. That can be anything from sending a quick email of support to going to community meetings,” Lynn said.

I’ll add here that you can call your local election office and see if there are positions that need filling. We know from Steve Bannon that Trump supporters are looking to get into as many election-related positions as possible.

“In this period of heightened anxiety, it can be tempting to tune out the world. But we truly need all hands on deck to make sure our democracy doesn’t crumble,” said Lynn.
–

Being respectful and honest is not, and should not be, partisan.

One of the more interesting developments this week was former Vice President Dick Cheney — once vilified by Democrats as Darth Vader — appearing on Capitol Hill to show support for the January 6 investigation, which his daughter Rep. Liz Cheney is helping to conduct.

In the Wall Street Journal, the Republican spinmeister Karl Rove wrote that Democrats and Republicans have responsibilities to truth and civility.

Stop generalizing about Republicans. Democrats, he said, need to resist the “petty habit of aggravating partisan fault lines by indiscriminately condemning all who came to Washington that day.”

Accept facts. Proving the point that Democrats need to separate Republicans of goodwill from those who stormed the Capitol, he admitted his own party has more work to do.

I was shocked to see these words come from Rove:

“I’ve been a Republican my entire life, and believe in what the Republican Party, at its best, has represented for decades. There can be no soft-pedaling what happened and no absolution for those who planned, encouraged and aided the attempt to overthrow our democracy. Love of country demands nothing less. That’s true patriotism.”
–

Former Ohio Gov. John Kasich, now a CNN contributor, is a Republican who has been critical of Trump and ran against him in the 2016 Republican presidential primary.

He’s acknowledged the threat of January 6, and when I asked him Friday what everyday Americans should do to protect democracy, he had a ready answer:

“The most important thing that we can do as individuals is to recognize the intrinsic value of all other people — even people we don’t like, people we don’t agree with, people we fight with, maybe people that we get so angry we insult.”

I pushed him on how that helps save democracy.

“Because then people have, you know, we have a set of expectations.”

We then veered into an anecdote about him having to accept a friend who has chosen not to get the Covid-19 vaccine.

“It’s very frustrating and it makes some of us angry that he won’t do it. OK, but at the basic level, I care about him and I respect him as a human being.”

I did not follow the link between Covid-19 and democracy, and the conversation seemed to agitate Kasich, who said there is no surface-level answer.

“I know you’re looking for some pithy little line here. I’m giving it to you,” he said. “Until we all begin to recognize the intrinsic value of all human beings, we are going to continue to erode and have danger in our culture and in the … strength of our country.”
–
–
–
–