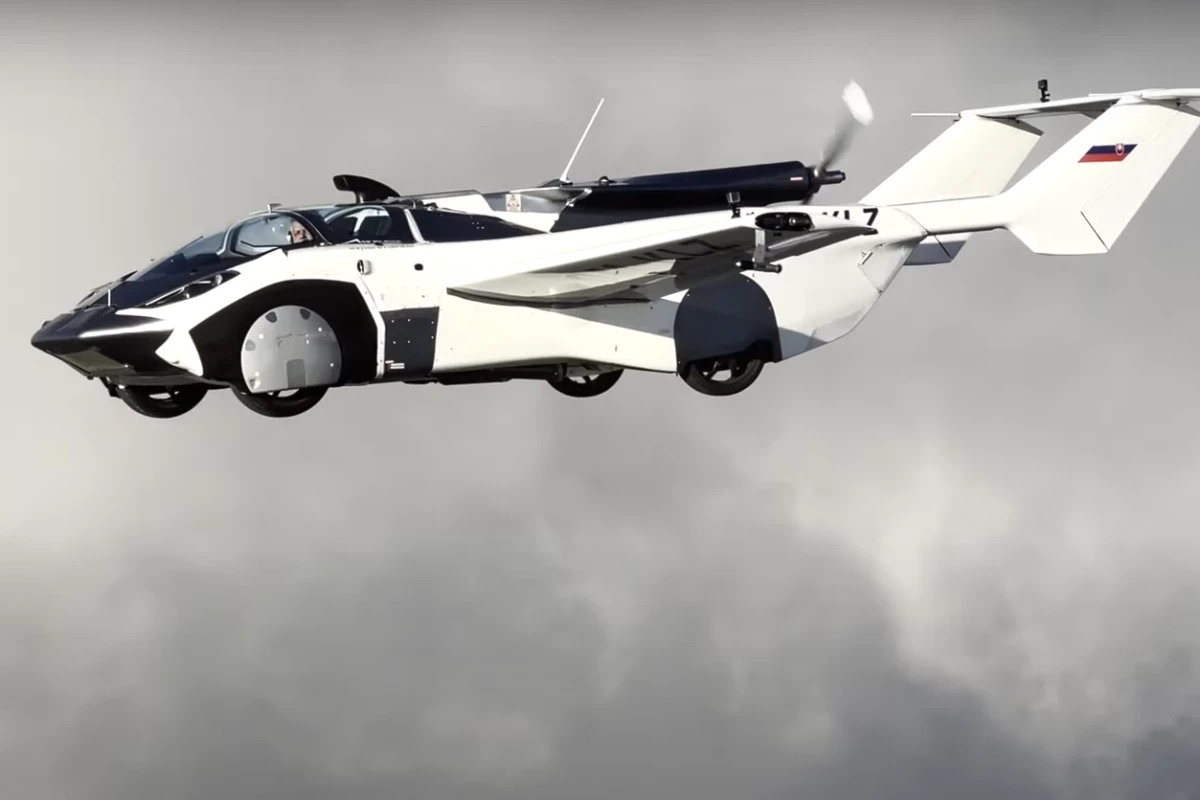 The Civil Aviation Division of the Transport Authority of Slovakia has granted a Certificate of Airworthiness to Klein Vision’s AirCar.  Klein Vision

2022 Jan 24
–
Following its maiden flight toward the end of 2020, and flying city-to-city for the first time in June of last year, Klein Vision’s AirCar flying car has now been granted a Certificate of Airworthiness by the Slovak Transport Authority.

Way back in the mists of 2016, Professor Stefan Klein parted ways from a Slovak air mobility company called Aeromobil to work on his own flying car. An eight-strong team has since notched up some 100,000 man-hours to take design drawings into computer models and on to working prototypes.

The AirCar has now clocked up more than 70 hours of test flights to European Aviation Safety Agency (EASA) standards, including 200 takeoffs and landings on cross-country jaunts, on its way to being awarded the Certificate of Airworthiness.

“Transportation Authority carefully monitored all stages of unique AirCar development from its start in 2017,” said René Molnár, director of the Civil Aviation Division of the Transport Authority of Slovakia. “The transportation safety is our highest priority. AirCar combines top innovations with safety measures in line with EASA standards. It defines a new category of a sports car and a reliable aircraft. Its certification was both a challenging and fascinating task.”

“The Certificate of Airworthiness is an official certificate issued in compliance with all EASA regulations for its member states,” the company’s cofounder, Anton Zajac, told us. “Each member state appoints local authority to issue certificates valid across the member countries. Hence, Aircar could fly into the UK and we do have plans to fly to London from Paris in near future.

“It is CoA in experimental category. We are, however, going to apply for EASA CS-23; The entire research and development has been done to comply with EASA standards. CS-23 will require production of three units, since they will be destroyed in the certification process – hence, CS-23 is order of magnitude more costly.”

At the press of a button the vehicle transforms from aircraft mode to road mode in around two minutes – automatically folding the wings and raising them up before tucking them inside the composite body and drawing in the tail section.

“AirCar certification opens the door for mass production of very efficient flying cars,” said the brains behind the vehicle’s design and development, and the AirCar’s test pilot, Professor Stefan Klein. “It is official and the final confirmation of our ability to change mid-distance travel forever.”

Klein Vision is currently testing a lightweight-but-powerful engine from Adept Airmotive that’s destined to power a new monocoque AirCar with variable-pitch prop that’s expected to “reach speeds of over 300 km/h [186 mph] and range of 1,000 km [~620 miles].” The company anticipates this production vehicle to gain certification within 12 months.

Paul Ridden
While Paul is loath to reveal his age, he will admit to cutting his IT teeth on a TRS-80 (although he won’t say which version). An obsessive fascination with computer technology blossomed from hobby into career before hopping over to France for 10 years, where he started work for New Atlas in 2009. Now back in his native Blighty, he serves as Managing Editor in Europe.
–

Load More
7 comments
Sign in to post a comment.
Please keep comments to less than 150 words. No abusive material or spam will be published.
–
Arcticshade 2022 Jan 24 – 05:14 AM
It looks so wrong but feels so enticing, until i think about the fact that the average joe would require a pilots license for it, would only be allowed to take off / land at airports. Would have to deal with a frame not purposely built to exlusively drive or fly.

Still its something interesting to see !

These craft was invented before the time of the EVTOL. Evtols will take over this niche along with many other current commercial flights.
–

Pierre Collet 2022 Jan 24 – 06:32 AM
Finally!!!
It makes so much more sense than these vtol monstrosities that are neither efficient on the road nor in the air…
(spoken as a private pilot since 1991)
–
dan 2022 Jan 24 – 10:18 AM
exciting to develop? YES! not so good car combined with not so good plane: maybe not such a good business case… but I wish the team luck (and the investors a big wallet). cool what they did, even if I rather go for a good aircraft transporting a nice foldable e-bike, or I hire a taxi or share a car…
–
Steven Clarkson 2022 Jan 24 – 11:43 AM
@Pierre Collet
Nope, an EVTOL ranks higher in the evolutionary tree than a flying car.
The flying car came before EVTOL’S.

For two an EVTOL is not suppose to drive as it can fly and land vertically exclusively, no need to be a hybrid and nor a half baked compromise.

Not saying that this specific flying car is half baked it seemed like they really put lots of effort into the final revised version ? i would love to see it be a success BUT it’s a zero match for the versitality and practicality of An EVTOL.
(In the other hand…If i’m not mistaken did one of these flying cars not crash not so long ago)
–

Gabor Pauler 2022 Jan 24 – 01:02 PM
Its usabilty is nowhere compared to a full-autopilot evtol. Except the minimal difference that it can fly manned in real, not in photoshop. What required a great deal of engineering genius.
–
Chris__  2022 Jan 24 – 08:20 PM
Why are people comparing this to vtols? They are completely different things, the evtols in development currently are an evolution of the helicopter. They are not hybrids of two travel modes (driving/flying), they are aircraft.

Of course, I still love this, but only from the ‘wow, that is a very cool billionaire toy’ perspective. This is not going to democratise flight or create air taxis. The plan to demo it with a flight from London to Paris says it all. This is for wealthy people to fly to the local airport nearest their french chateau for a weekend away, with the novelty that you don’t have to organise a car to be waiting at the local airport to take you to your house. But it’s still way cooler to look at than any flashy hypercar.
–

Arcticshade 2022 Jan 24 – 09:44 PM
@Gabor your comment is misleading EVTOLS can fly piloted all the time in real life, see ehang/volocopter.

No they are Not photoshopped, try to use google and see for yourself.

And those under testing will follow the same route, nothing strange about flying one remotely, in facy it’s just another great benefit of EVTOL technology to be able to fly it remotely which magnified just one of it’s many safety features !
–