A group of German, Austrian and Swiss immigrants has implanted an ideologically driven settlement in one of the country’s poorest regions. 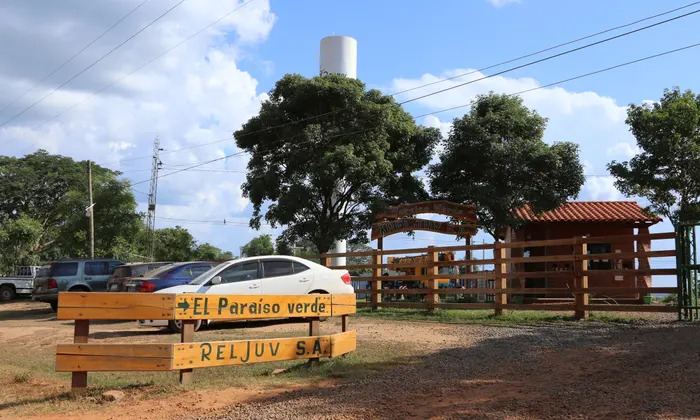 The entrance to El Paraíso Verde, 12km from the town of Caazapá. Photograph: William Costa –

By William Costa in Caazapá
Last modified on Thu 2022 Jan 27
–
A 1,600-hectare (4,000-acre) gated community, dubbed El Paraíso Verde, or the Green Paradise, is being carved out of the fertile red earth of Caazapá, one of Paraguay’s poorest regions.
–
The community’s population – consisting mainly of German, Austrian and Swiss immigrants – will eventually swell from 150 to 3,000, according to the owners.
–

The project’s website bills it as “by far the largest urbanization and settlement project in South America”, describing the colony as a refuge from “socialist trends of current economic and political situations worldwide” – as well as “5G, chemtrails, fluoridated water, mandatory vaccinations and healthcare mandates”.

Immigration to the colony has stepped up since the start of the Covid-19 pandemic, with residents interviewed on its YouTube channel attributing their move to skepticism about the virus and vaccines.

Caazapá, a rural region dominated by cattle ranching in the heart of lush eastern Paraguay, saw a jump from four new German residents in 2019 to 101 in 2021, according to official figures. “Anti-vaxxer” immigrants have also been reported settling in other parts of Paraguay.

One German citizen who lives nearby and who does business with Paraíso Verde, cited discredited conspiracy theories about coronavirus vaccines to explain the surge. They claimed that Paraguay’s accommodating immigration laws have proved attractive to Germans who want to “escape the matrix” and flee the “deep state and one world order”.

“Many older people are coming. They understand that many people are dying in care homes [after vaccination],” said the German, who asked not to be named. “And the others, in their 40s, are trying to bring their children over here to escape.”

But the appearance of an insular colony of Europeans has been watched with concern by some in the nearby regional capital, also named Caazapá.

“Why are they here? We don’t know, but we want to find out,” said Rodney Mereles, a former municipal councillor.

On its YouTube channel, Paraíso Verde shares videos describing the pandemic which has killed some 5.5 million people as “non-existent”, promoting false, dangerous Covid “miracle cures”, and advertising Paraguay as a country without pandemic restrictions – despite the government’s clear health protocols.

Even as Paraguay recorded the world’s highest Covid death rate per capita in June 2021, the colony shared videos of large parties in violation of restrictions.

In Germany, sections of society radicalised by the refugee crisis of 2015 have proved a fertile ground for disinformation and conspiracy theories about the pandemic. The far-right Alternative für Deutschland party has tried to revive its waning electoral fortunes by railing against lockdown measures, mask mandates and vaccines.

And a small minority of those sceptics have decided to head abroad, with Bulgaria reported as another popular destination.

The presence in Caazapá of a large group of Covid skeptics worries local health authorities. Dr Nadia Riveros, Caazapá’s head of public health, said the pandemic had been devastating for the region, which has no ICU beds and only one fully equipped ambulance.

“We don’t want to go through that again. I think foreigners, wherever they’re from, should have to get vaccinated before entering the country,” she said.

And as Paraguay faces a quickly escalating third wave of Covid while struggling to improve on the second-lowest vaccination rate in South America, the health ministry announced this month that non-resident foreigners entering the country must now present vaccination certificates.

At least six German nationals without vaccination certificates have been refused entry since this new regulation came into force.

Paraguay has a long and sometimes troubled history of inward-looking immigrant colonies driven by ideological and religious zeal. Settlement projects by Mennonites, Australian socialists and the Unification church among others have all left marks on the country.

Paraguay’s most notorious settlement was Nueva Germania, the proto-fascist colony set up in 1886 by Elizabeth Nietzsche – the philosopher’s sister – and her husband Bernhard Förster. Förster died, probably by suicide, as Nueva Germania sank under the weight of financial problems, internal conflict and settlers’ lack of agricultural knowledge.

While Nietzsche and Förster envisioned an Aryan colony untouched by Jewish influence, El Paraíso Verde’s founder and leader Erwin Annau has spoken of preserving Germanic peoples from the presence of Islam and – on a website that was recently taken offline – questioned the blame allocated to Germany for the second world war.

In a 2017 speech given before members of the Paraguayan government, Annau said: “Islam is not part of Germany. We are enlightened Christians, and we are concerned about our daughters. We see the Qur’an as [containing] an ideology of political domination, which is not compatible with democratic and Christian values.”

Paraguay itself has a small but well-established Muslim community in several major cities. Abdun Nur Baten, missionary for the Ahmadiyya Muslim Community of Paraguay, highlighted the apparent contradiction in Annau’s comments.

“They say Muslim immigrants don’t integrate, that they don’t adopt German culture or German norms, that they’re not assimilating. So it’s very hypocritical to go to another land and do exactly what you are accusing Muslims of doing: it’s beyond funny how hypocritical it is,” Nur Baten said. He said his community would welcome peaceful dialogue with Paraíso Verde.

But despite concerns in the local community, Paraíso Verde is backed by increasing political and economic power.

The group has frequently met with local and national officials, and claims to have held meetings with Paraguayan health authorities to lobby against tighter Covid regulations.

Gladys Rojas, a former president of Caazapá town council, claimed that Paraíso Verde was protected by links to the political faction of the former Paraguayan president Horacio Cartes. Cartes is a controversial businessman who has repeatedly contested allegations he is linked to cigarette smuggling, but is considered Paraguay’s richest and most powerful person.

Two members of the Cartes family have been board members of Reljuv, a company owned by Paraíso Verde, and in recent municipal elections, the company’s president, Juan Buker, was heavily involved in election campaigns for candidates backed by Cartes.

“They’ve got politicians and money on their side,” said Rojas, adding that many in Caazapá, the region with the highest rate of extreme poverty in Paraguay, were reluctant to ask questions as the colony has become the area’s biggest employer.

On a recent afternoon, the Guardian travelled along the dirt road from the town of Caazapá to Paraíso Verde. Close to the long perimeter fence, groups of residents strolled along the track in the slowly softening sun.

At the entrance gate, a Reljuv employee emerged, flanked by guards armed with long guns.

After rejecting the possibility of entry or an interview, the employee aggressively demanded to examine identity documents of all present, even as the reporter attempted to leave.

“You know what to do,” the employee repeated, confusingly. Paraíso Verde did not respond to repeated requests for comment.