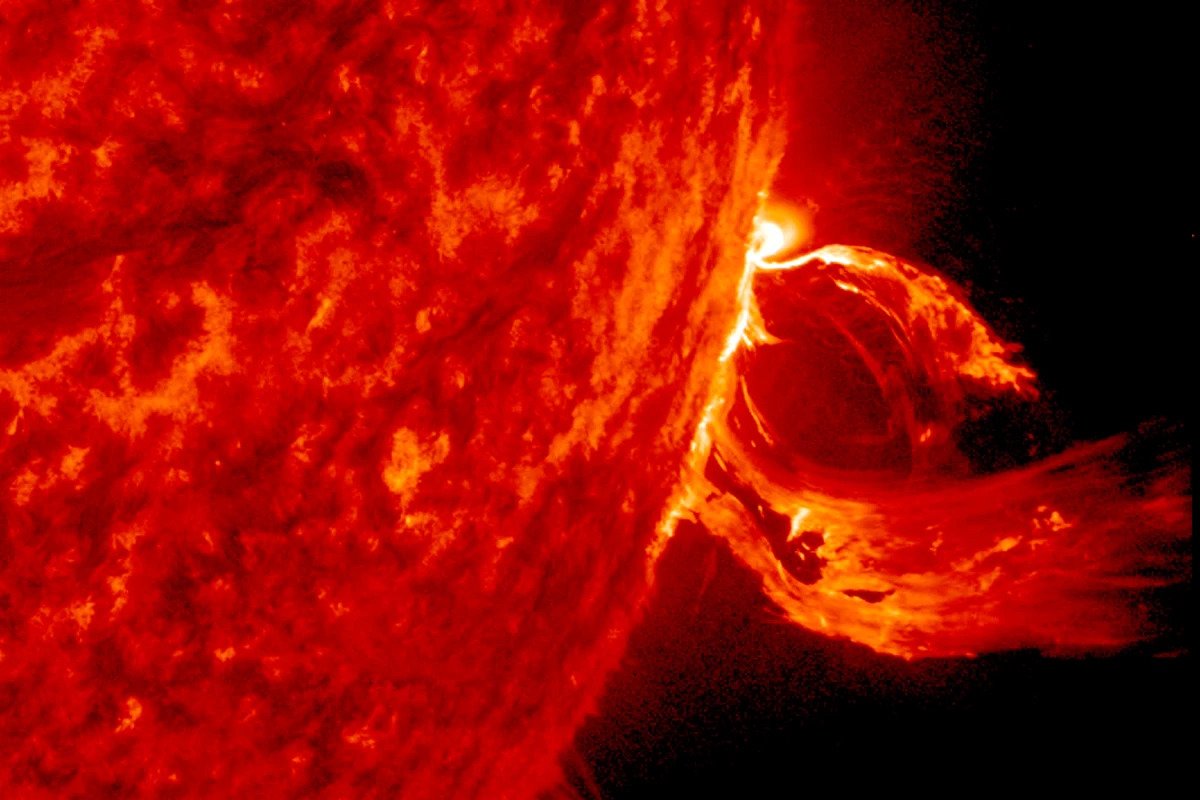 Coronal mass ejections (CMEs), like this one photographed in 2015, can cause geomagnetic storms on Earth.  Solar Dynamics Observatory, NASA
–

Determining the risk that these events may pose, and predicting when they might strike, is important to help us prepare for them. So scientists are looking back in time to get a long-term picture of how often they occur. Written records only go back a few centuries, but evidence can be preserved in ice dating back millennia.

In a new study led by researchers at Lund University, the team examined cores of ice drilled from Greenland and Antarctica. Radioactive isotopes like beryllium-10 and chlorine-36 are produced by the particles thrown off by the Sun, and can reach Earth’s surface in higher amounts during CMEs. Finding spikes in the concentrations of these isotopes can be the smoking gun for past geomagnetic storms.

And sure enough, the researchers detected a giant peak of beryllium-10 and chlorine-36 in the ice cores, at a depth corresponding to the year 7176 BCE, indicating a huge geomagnetic storm must have taken place then. Intriguingly, the same signature was spotted at the same point in four different ice cores, three from Greenland and one from Antarctica.

This find itself isn’t particularly surprising, but what did catch the team off-guard is the timing of the storm. The Sun goes through an 11-year cycle of activity, and it’s long been thought that geomagnetic storms are more likely to occur during the very active periods of this cycle. However, 7176 BCE corresponds to a time that the Sun should have been close to its minimum activity.

This could shake up our understanding of when we need to be on alert for solar storms, the team says. The consequences for our modern world could be devastating, resulting in widespread and long-lasting power blackouts.

“These enormous storms are currently not sufficiently included in risk assessments,” said Raimund Muscheler, an author of the study. “It is of the utmost importance to analyze what these events could mean for today’s technology and how we can protect ourselves.”

Michael Irving
Michael has always been fascinated by space, technology, dinosaurs, and the weirder mysteries of the universe. With a Bachelor of Arts in Professional Writing and several years experience under his belt, he joined New Atlas as a staff writer in 2016.
–
2 comments
Sign in to post a comment.
Please keep comments to less than 150 words. No abusive material or spam will be published.
bwana4swahili – 2022 Jan 28 – 09:50 AM
Probably a fantastic Aurora Borealis in 7176 BCE!
TechGazer – 2022 Jan 28 – 11:26 AM
The sun is a chaotic system, and such systems do produce occasional abnormal events. The question becomes ‘how frequently do these occur?’ Just because one happened very recently (in terms of solar age) doesn’t mean that they don’t occur only once very few billion years … or that the last 9000 years is extremely unusual because normally they occur several times a year. They’ll have to monitor more nearby stars to gain more data on solar cycles and extreme events.
–