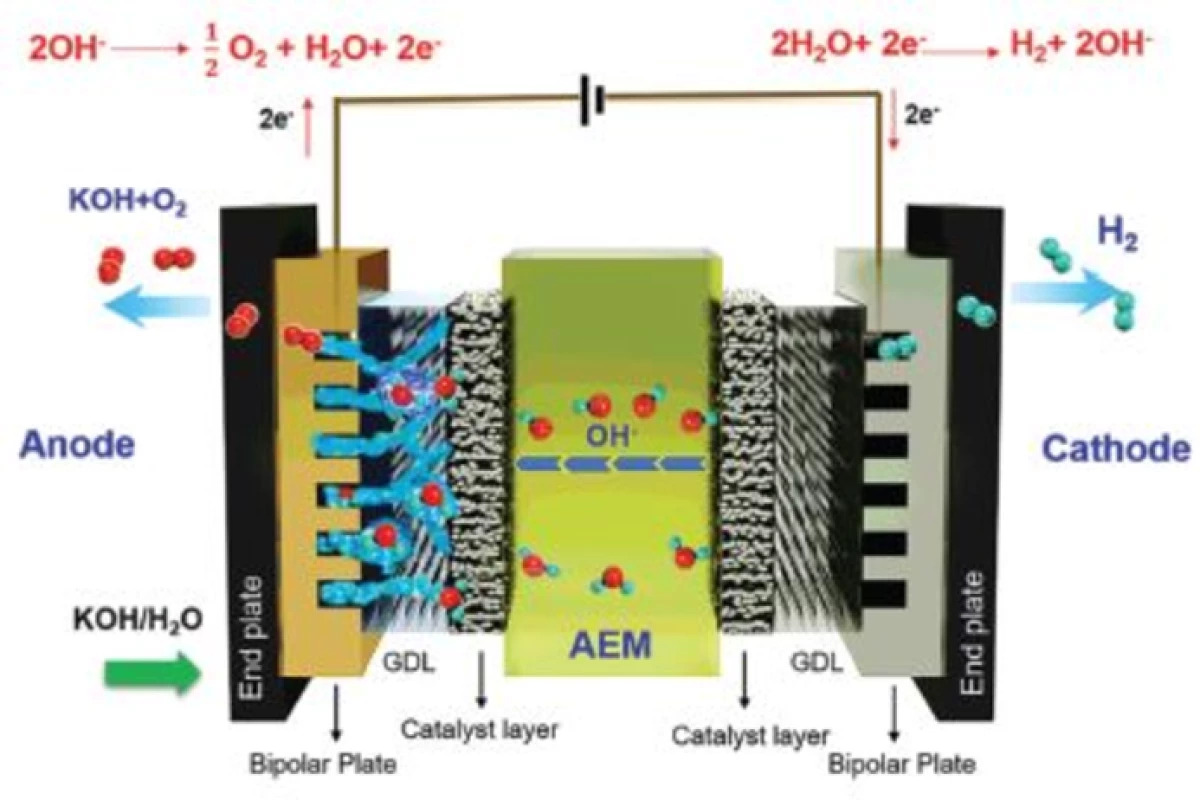 A new AEM electrolysis technology developed in Korea promises lower costs, increased performance and at least 10X the durability of prior AEMs.  KIST

Typically, electrolyzers use proton exchange membranes (PEMs), in which an anode and a cathode in an electrolyte material are separated by a membrane designed to allow positively-charged hydrogen ions to pass through as they’re attracted by the cathode. Here they combine with electrons to form hydrogen gas, which is collected, and oxygen is released at the anode.

The problem here is materials; the acidic environment required by PEMs generally necessitates expensive metals like platinum, ruthenium or iridium in their electrodes, as well as titanium in their separator plates.

One alternative electrolysis technology being researched is anion exchange membranes (AEMs), in which the separating membrane allows negatively-charged OH- ions to pass through instead. These are attracted to the anode, where they combine to form oxygen and water molecules, as the hydrogen atoms gravitate to the cathode for collection as H2 gas.

AEMs can operate under alkaline conditions, so they don’t need fancy noble metals – the materials involved are thus some 3,000 times less expensive. A relatively young technology, AEMs have not found commercial success in hydrogen electrolysis because they don’t perform as well and they don’t last as long.

Now, a team from the Korea Institute of Science and Technology (KIST) says it’s tested a new membrane and electrode assembly that outperforms prior AEMs by a factor of six, and outlasts them by a factor of at least 10. What’s more, it’s even got a 20 percent performance edge over current PEM technology.

“The research team developed poly(fluorenyl-co-aryl piperidinium) (PFAP)-based anion exchange materials (electrolyte membrane and electrode binder) with high ion conductivity and durability under alkaline conditions by increasing the specific surface area within the structure and based on this technology, a membrane electrode assembly was developed,” reads a press release. “The developed material represented excellent durability of more than 1,000 h of operation and has achieved a new record cell performance of 7.68 A/cm2. This is about six times the performance of existing anion exchange materials and about 1.2 times that of the expensive commercial PEMWE technology (6 A/cm2).”

So exactly how much could this technology do to reduce the price of green hydrogen? It’s hard to find definitive answers; green energy prices can fluctuate dramatically across different regions and there are many different PEM technologies that also vary in price.

But the International Renewable Energy Agency (IRENA) attempted to average things out in its Green Hydrogen Cost Reduction report from 2020. At the megawatt scale, says the report, “For the core of the stack, the catalyst coated membrane, rare metals represent an important part of the cost. Put into context, however, they represent less than 10 percent of the cost of a full PEM electrolysis system.”

Thus, IRENA doesn’t consider the metals themselves to be a hugely promising cost reduction target, although the report does add that “for iridium in particular, they might represent a bottleneck for scaling up manufacturing of PEM electrolyzers, in the absence of a significant scale-up of iridium supply.”

What’s more, the report points out that PEM electrolyzers typically last somewhere in the region of 50,000 hours – or 5.7 years. So while the KIST team appears to have made a huge advance relative to the hundred-hour lifespans of existing AEM electrolyzers, it hasn’t yet demonstrated equal or superior durability compared to today’s PEMs. And even if the material is capable, proving it will take another five and a bit years on the test bench. That’s a tough hurdle.

Still, the new membrane material may find other uses in the meantime.

“The developed material,” says Professor Young Moo Lee of Hanyang University, “has a high potential for application as a core material for not only water electrolysis but also for hydrogen fuel cells, carbon capture utilization and direct ammonia fuel cells, which are the next-generation hydrogen industry.”

The research is published in the journal Energy & Environmental Science.

Source: KIST and National Research Council of Science and Technology via EurekAlert