2022 Jan 31
–
I had dreamed about photographing polar bears for a long time. Some time ago my hobby, wildlife photography, ceased to be just a hobby and turned into a large part of my life. And if you devote so much time to an activity then your goals should be ambitious. Most of all I like to take pictures of large marine animals, whether on land or under water. Not everyone knows, but zoologists classify polar bears as marine mammals since they spend most of their time on ice floes away from land. And their paws even have webbing.
–
There are only a few places on the planet where polar bears can be found in large numbers. One of them is Russia’s Wrangel Island, a nature reserve under Unesco protection that is often called a polar bear maternity ward. The place is very inaccessible, which may be bad for tourists but is great for the animals.

Preparations for the expedition to Wrangel took nearly two years, and last August we finally set off for the north of Chukotka on a small ice-class sailing yacht. We proceeded about 2,000km (1,200 miles) along the coast, stopping in deserted bays and photographing grey and humpback whales.

We met an incredible number of different birds, several brown bears, sea lions and seals. We went scuba diving in the waters of the Chukchi Sea, which turned out to be full of life. I felt as if I was in a parallel universe.

Days and weeks passed. Landscapes changed dozens of times: sunny pebble beaches, steep cliffs, mountains and tundra. Finally, after passing Cape Dezhnev and heading for Wrangel Island, we began to encounter floating sea ice, which was unusual for the time of year. It had been assumed that the ice edge would be much farther north.

One day, bad weather was expected and the captain approached a small island, Kolyuchin, to take shelter from the storm. Kolyuchin is known for the polar weather station that operated on it in Soviet times. Though the station was closed in 1992, the abandoned village still stands on the island.

The stormy wind and rain and the neglected buildings on the rocky shores all served to make everything happening seem surreal. Suddenly we noticed movement in the windows of the houses.

Someone took out some binoculars and we saw the heads of polar bears. Fog, a place long deserted by people, polar bears – it was the perfect setting.

The bears walked around the houses and among barrels left on the island a long time ago. There were about 20 animals in sight at the same time, mostly males. The females kept to the side with their cubs, closer to the shores of the island. Barrels are a well-known problem in the Russian Arctic. Back in the days of the USSR, fuel was delivered to the station in them, but it was very expensive to take the barrels back, so they were simply discarded.

It was too dangerous to land on the island that day, so I took pictures from a drone equipped with special low-noise propellers. I also used certain tricks of the trade that allowed me to photograph the animals without disturbing them. After a while, the bears practically ignored the unusual buzzing.

Later I asked one of Russia’s top polar bear experts, Anatoly Kochnev, what causes the animals’ behaviour – why do they love to sit in the buildings? The biologist, who worked in Chukotka and on the island of Kolyuchin for many years, told me that, first of all, polar bears are very curious by nature, so they always attempt to get through any unlocked window or door. And secondly, unfortunately, these animals were traditionally hunted, and so they use these houses as a form of protection from humans.

But then he told me something even more interesting. It turns out that bears very rarely appear on the island in such numbers. No one knows why, but once every nine years the floating ice remains near the shore in summer. Consequently, the bears do not travel far to the north with the ice, as usual, and take up residence in the abandoned polar station. We saw proof of this later on when we met almost no bears on Wrangel Island to the north.

Though several months have passed since the expedition, I still sometimes see polar bears in decaying windows before my eyes when falling asleep. And looking at the main photo in my life at the moment, the one named House of Bears, I think that sooner or later all human-made things on Earth will cease to exist – buildings, cars and computers will all meet their end. But life is eternal. These bears will continue to hunt, swim among ice floes and explore islands even when civilization ceases to exist. But life will remain eternal only if we humans finally begin to take care of the planet and the living creatures that need our protection. 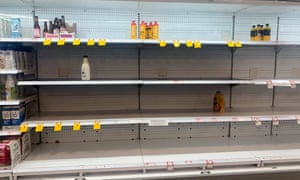 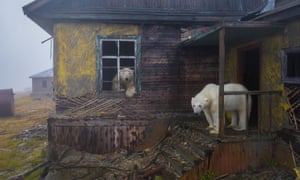 Back to top
–
© 2022 Guardian News & Media Limited or its affiliated companies. All rights reserved. (modern)
–
–
–
(For the source of this, and many other equally intriguing and important articles, please visit: https://www.theguardian.com/world/2022/jan/31/polar-bears-move-into-abandoned-arctic-weather-station-photo-essay/)