The US Department of Agriculture has been called in to trap and relocate the feisty fowl before they begin nesting.

A rafter of rowdy turkeys have run afoul of researchers at NASA’s Ames Center in Mountain View, California.
–
Nearly two dozen birds have been creating chaos at the Bay Area space agency outpost, pecking at cars, blocking traffic, disrupting flights at the nearby Moffett federal airfield, and blanketing most everything with their droppings. They have become such a nuisance that officials from the US Department of Agriculture have been called in to trap and relocate them – before they begin nesting and hatch a new generation of pillaging poults.

The plan is to slowly lure the turkeys into a trap and drive them to the nearby San Antonio Valley ecological reserve.

Wildlife officials will use corn or a similarly tempting turkey snack to coax the birds into one area.

Once they begin to congregate in that area for a few days in a row, the officials will set up a walk-in corral trap, again tempting the birds with food. The corralled turkeys will have their blood drawn, get oral and cloacal swabs, get banded and then be placed in “turkey boxes”, said Tanya Espinosa, a spokesperson for the USDA. Care will be taken to “reduce any stress” throughout the process, she said.

“We hope to have most of them trapped within the next week or two,” added Espinosa. “Unfortunately, people continue to feed them which interferes with our trapping and relocation.”

Feeding wild turkeys “makes them associate humans with food and often become more aggressive towards humans in their search for a meal,” she said.

The federal space agency said the birds were being moved so they could “roam freely”.

“This measure protects the safety and wellbeing of the turkeys, as well as the Ames community and workforce,” NASA said in a statement.

The Ames research center has long been home to a rafter of turkeys. One former employee described them to local news station KPIX as “very charming” and another said they were “friendly and nonchalant”.

But the group’s ranks have grown larger, and their behavior more audacious in recent years, according to wildlife officials.

#HappyThanksgiving These turkeys weren’t on TV today, but they parade around @NASAAmes all the time. The world-class research center is home to a rafter of wild turkeys! 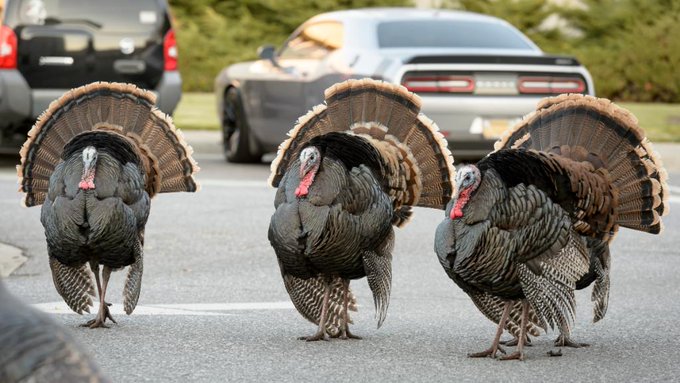 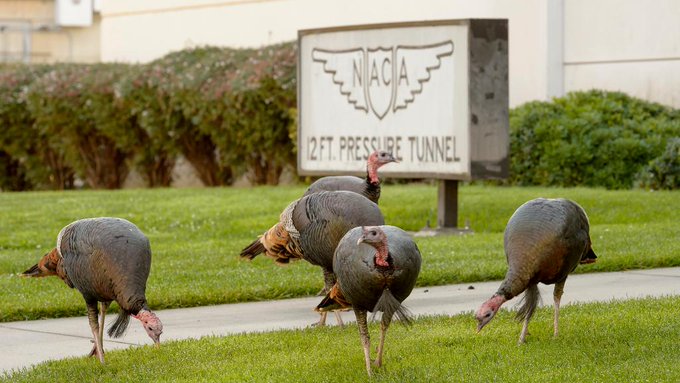 “The turkeys are being relocated now, before they begin nesting to prevent the population from growing larger but still allow the turkeys to nest at the correct time,” Espinosa said. “This will help ensure that the young turkeys don’t learn from older turkeys in regards to damaging cars and landscaping.”

Wild turkeys are common sightings in US cities, suburbs and parks. Their populations have resurged due to conservation efforts after decades of overhunting – especially in the years after Abraham Lincoln declared Thanksgiving an official holiday – diminished their numbers.

“The turkeys came back, which was amazing from an ecological point of view,” Chris Bernier, a biologist for the Vermont fish and wildlife department, told the Guardian last year. “Unfortunately we live in their territories now.”

The USDA and other wildlife agencies recommend that people who encounter aggressive turkeys near their homes defend themselves “with a broom, open umbrella, cane or spray them with a water hose”, but above all avoid interacting with or feeding the wild birds.