Human exposure to 2,4-D has substantially risen despite a multitude of health and environmental concerns. 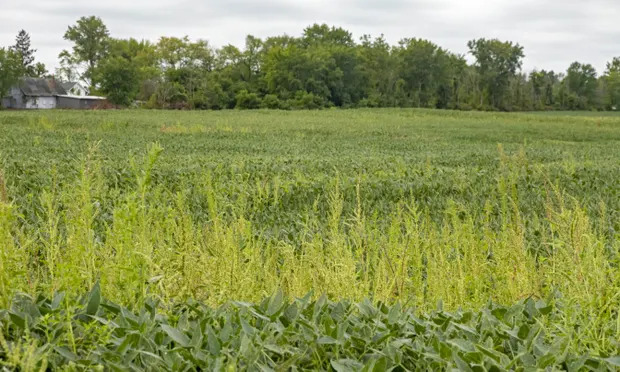 By Nina Lakhani in New York
Last modified on 2022 Feb 09
–
One in three people across America have detectable levels of a toxic herbicide linked to cancers, birth defects and hormonal imbalances, a major nationwide survey has found.
–
Human exposure to the herbicide 2,4-D has substantially risen amid expanding use among farmers despite a multitude of health and environmental concerns, according to the first nationally representative study evaluating the footprint of the chemical.

The herbicide was developed in the mid-1940s and quickly became the go-to weedkiller for farmers focused on increasing crop yields, while also gaining popularity among gardeners looking for a pristine lawn.

Its popularity dipped in favor of Roundup (glyphosate) and genetically modified cotton and soybeans resistant to this herbicide, but it has seen a resurgence since the spread of Roundup-resistant weeds.

2,4-D is currently riding high thanks to this Whac-a-Mole approach to pest control in industrialised farming, with about 600 US agricultural and residential products now containing the chemical which can be ingested through the skin, mouth and nose.

Researchers from George Washington university examined the urine samples of 14,395 people (aged six and older) from all walks of life who take part in the annual National Health and Nutrition Examination Survey. They looked for biomarkers to the pesticide, and compared the exposure levels detected with the use of 2,4-D from 2001 until 2014.

As the pesticide grew in popularity among farmers and gardeners, so did evidence of human exposure, rising from a low of 17% in 2001-02 to a high of almost 40% a decade later.

Exposure to high levels of 2,4-D, an ingredient of Agent Orange used against civilians during the Vietnam war, has been linked to cancers including leukemia in children, birth defects and reproductive problems among other health issues.

While little is known about the impact of low-level exposure to the herbicide, it does disrupt the endocrine system – a network of glands that make hormones which control growth and development, reproduction, metabolism and our organs and moods.

The study, published online in Environmental Health, found exposure was not uniform, with several subgroups including children aged six to 11 and women of childbearing age showing substantially higher levels of 2,4-D in their urine. Exposure to toxins is often more detrimental during developmental or key growth periods like pregnancy and early childhood.

“Further study must determine how rising exposure to 2,4-D affects human health–especially when exposure occurs early in life,” said Melissa Perry, professor of environmental and occupational health and senior author of the paper. “Children and other vulnerable groups are also increasingly exposed to other pesticides and these chemicals may act synergistically to produce health problems.”

The study also found that Black participants, who multiple previous studies have shown to have higher exposure to all sorts of environmental pollutants, showed signs of lower exposure to the weedkiller than white Americans. This may be a result of historic racist policies restricting access to homes with gardens and green spaces for Black communities, the researchers argue.

Overall, the amount of 2,4-D applied in agriculture increased 67% between 2012 and 2020, but its use will almost certainly grow sharply over the next decade due to the widespread use of the controversial weedkiller Enlist Duo – a relatively newly approved combo (2,4-D and glysophates) for genetically modified crops. This will make both toxins – which are both banned in some countries – increasingly difficult to avoid.

“Our study suggests human exposures to 2,4-D have gone up significantly and they are predicted to rise even more in the future,” Marlaina Freisthler, a PhD student and co-author of the study. “Given the potential for human and environmental health impacts of such widespread exposures, we believe increases in use and exposures are not the direction to be going.”

–
Back to top
–
© 2022 Guardian News & Media Limited or its affiliated companies. All rights reserved. (modern)
–
–
(For the source of this, and many other equally intriguing and important articles, please visit: https://www.theguardian.com/environment/2022/feb/09/toxic-herbicide-exposure-study-2-4-d/)