What is less well known in the Western world is that Eros has a Hindu equivalent: Kamadeva, the Hindu god of love, desire and infatuation. Indeed, as a scholar of Indic traditions, I find that there are often parallels between the sacred stories of Hindu deities and those found in cultures around the world, particularly Indo-European ones.

The Hindu Cupid also shoots his arrows into hearts. Kamadeva, however, is not a chubby cherub, but a handsome youth who rides upon a large green parrot named Suka. His bow is made of sugarcane, its bowstring is made up of honeybees and his arrows are made of flowers. Indeed, this description can be found as early as the Rigveda, the most ancient of Hindu scriptures, which dates back at least 3,000 years.

All these elements symbolize the sweetness of love. They also evoke the springtime, when new life emerges into the world. Kamadeva’s parrot, Suka, also represents spring, as well as romantic love, as parrots are often observed living in pairs.

Kamadeva, also known as Madana, is accompanied by his partner, Rati, who is, appropriately, the goddess of love.

What is probably the most famous story about the pair illustrates the tension between two of the most deeply held values in Hindu tradition. Romantic love, particularly within family life, is greatly prized. On the other hand, the highest ideal, liberation from the cycle of rebirth, is often seen as requiring spiritual aspirants to renounce worldly attachments – including conventional social relationships – in the pursuit of meditative solitude.

One of the most celebrated and revered Hindu deities, Shiva, embodies this tension, as he is both a great yogi and a loving husband and father. Once, when Shiva was deep in meditation, Kamadeva sought to pierce his heart with an arrow. Furious at having his meditation disturbed, Shiva blasted the hapless god of love with a powerful beam of energy emanating from his famous third eye. 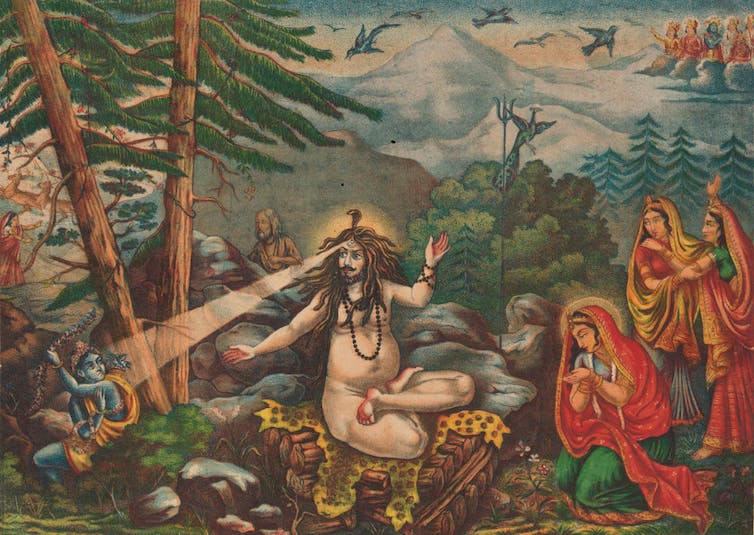 Shiva did not appreciate having his meditation interrupted. Heritage Images/Hulton Archive via Getty Images

–
Kamadeva was not trying to pierce Lord Shiva’s heart out of whimsy. Rather, the story says, the world was being threatened by a monstrous demon, or asura, called Taraka, whom none of the gods was able to defeat.

According to a prophecy, only Kartikeya, the son of Lord Shiva and his wife, the Mother Goddess Parvati, would be able to defeat this demon. The problem was that Kartikeya had not yet been conceived. Given Shiva’s commitment to meditation, as the patron deity and embodiment of yoga, it was unlikely that this would happen any time soon.

Kamadeva was therefore dispatched by the gods for precisely this reason: to arouse Shiva’s love for Parvati and awaken him from his meditation so he could father the son who would save the world.

Though sometimes quick to anger, Shiva is portrayed as a merciful deity. Rati, inconsolable at the loss of her beloved, pleaded with Shiva to restore Kamadeva to life, which he did. Subsequently, Shiva and Parvati conceived their son, Kartikeya, who went on to destroy the demon.

–
–
[3 media outlets, 1 religion newsletter. Get stories from The Conversation, AP and RNS.]

Jeffery D. Long does not work for, consult, own shares in or receive funding from any company or organization that would benefit from this article, and has disclosed no relevant affiliations beyond his academic appointment.

Write an article and join a growing community of more than 140,900 academics and researchers from 4,273 institutions.