Archaeologists excavating the windswept Ness of Brodgar are unearthing a treasure trove of neolithic villages, tombs, weapons and mysterious religious artifacts, some to be displayed in a blockbuster exhibition.

‘A gateway into a liminal world’ … the Standing Stones of Stenness, Orkney, built circa 3000-2500BC. Photograph: Theasis/Getty Images/iStockphoto
–

By Charlotte Higgins
2022 Feb 15
–
If you happen to imagine that there’s not much left to discover of Britain’s stone age, or that its relics consist of hard-to-love postholes and scraps of bones, then you need to find your way to Orkney, that scatter of islands off Scotland’s north-east coast.
–

On the archipelago’s Mainland, out towards the windswept west coast with its wave-battered cliffs, you will come to the Ness of Brodgar, an isthmus separating a pair of sparkling lochs, one of saltwater and one of freshwater.
–
Just before the way narrows you’ll see the Stones of Stenness rising up before you. This ancient stone circle’s monoliths were once more numerous, but they remain elegant and imposing. Like a gateway into a liminal world of theatricality and magic, they lead the eye to another, even larger neolithic monument beyond the isthmus, elevated in the landscape as if on a stage.
–
This is the Ring of Brodgar, its sharply individuated stones like giant dancers arrested mid-step – as local legend, indeed, has it.
– 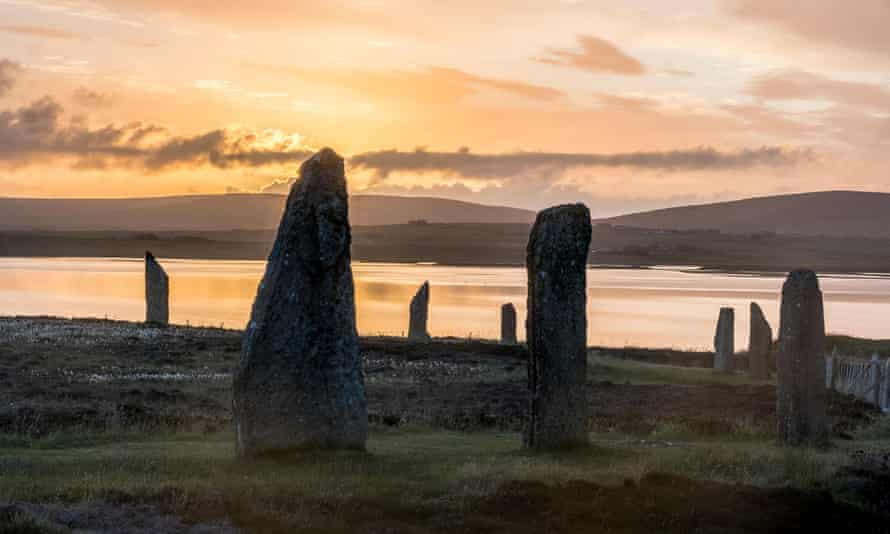 It’s between these two stone circles that archaeologist Nick Card and his team are excavating a huge settlement of neolithic stone buildings. The earliest date from about 3300BC, their walls and hearths crisply intact, their pots and stone tools in remarkable profusion, the whole bounded by six-meter-wide monumental walls. “You could continue for several lifetimes and not get to the bottom of it,” says the neatly white-bearded, laconic Card as we gaze out over the site, presently covered with tarpaulin to protect it from the winter storms. “Every year it never fails to produce something that astounds us.”

After nearly two decades of digging, they have excavated only about 10% of its area, and about 5% of its volume. It goes deep: buildings are stacked on the ruins of older ones; the place was in use for 1,000 years. When summer comes, they’ll dig again. When the coverings come off each July, says Card’s colleague, Anne Mitchell, “down you go and you’re among the ghosts of the past”.

Many of the most intriguing finds from the Ness of Brodgar will be on show at the British Museum this month in a new exhibition, the World of Stonehenge, a survey of northern-European prehistory from the era of the hunter-gatherers to the early bronze age, using the long, complex history of Britain’s most celebrated neolithic monument as the story’s spine.

The landscape around the ness reminds me of the barrow-studded downs around Stonehenge, in fact – both have the feel of a vast stage, ready to be used for ritual or performance. The earliest buildings here are older than Stonehenge, though. “For neolithic stone architecture, Orkney blows everywhere else out of the water,” says Neil Wilkin, curator of the British Museum show.

Elsewhere in Europe – including the settlement at Durrington Walls in Wiltshire, now thought to be where the builders of Stonehenge lived – wood was the favored construction material for neolithic domestic buildings. But in Orkney the inhabitants also built their houses from stone. (There were perhaps many wooden structures too, but stone architecture around here is so profuse that the search for postholes feels less urgent; there are few trees on Orkney now, but maybe more then, as well as a plentiful supply of driftwood.)

It means the whole archipelago is dotted not just with incredibly well preserved neolithic tombs, neatly built out of the local flagstone, but also villages – construction of a scale and quality that would not be repeated until well into the medieval era, 4,000 years later. These include the famous Skara Brae, a coastal settlement revealed when a storm whipped away the great blanket of sand that had hidden it until 1850.

But there are other, more ghostly places, too, like the unexcavated village on the eroding coastline of Sanday that Mark Edmonds, local resident and York University archaeology professor emeritus, describes at the start of his book, Orcadia.

Orkney was not peripheral or cut off in the stone age; its surrounding waters were not barriers but pathways, to Ireland, to mainland Britain, and beyond.

Neolithic axes made of jadeite, quarried in the Italian Alps, have been found in Scotland: the most beautiful example, on loan from the National Museum of Scotland, will be in the World of Stonehenge show. “It’s so simple and so exquisite,” says the exhibition’s assistant curator, Jennifer Wexler, “with a kind of modernist feel to it. And it just sparkles in the light.” Aesthetics were important in this world.

The characteristic pottery – “grooved ware” – used by the builders of Stonehenge was first made in Orkney, it is thought. Card and his team have found 100,000 sherds of it so far. Mitchell explains how they tease it out of the middens (ancient refuse heaps) using a cake slice and an aluminium sheet salvaged from an old helicopter. A lot of these sherds are in boxes stacked floor-to-ceiling in their HQ, a bungalow on the site bursting with material.

Some of the pottery is rather crumbly – like “digestive biscuits”, says ceramics expert Roy Towers, one of the volunteers on this donations-funded dig. Jan Blatchford, another highly skilled volunteer, shows me how reflectance transformation imaging – a digital photography technique using multiple camera angles – can expose details barely visible to the naked eye. Here is the mark where a plaited mat made its imprint on the base of one newly made, unfired pot; here are the whorls of the maker’s thumbprint on another, bringing the dizzyingly intimate sense of a human hand shaping the vessel 5,000 years ago.

It was out of the window of this little house that, washing vegetables at her sink one day in 2003, the former owner saw a plough stutter as a piece of masonry got lodged between its blades. It was worked, neolithic stone. The farmer contacted the local archaeologists. “We’d all been driving past the place for years assuming it was a natural ridge,” says Edmonds – rather than ancient ruins, hiding in plain sight.

The immense settlement is an ongoing revelation – and yet, perhaps, not entirely surprising. The islands are teeming with neolithic remains. Edmonds tells me he once interviewed Orcadian families, asking them about the ancient stone axes and other finds they have on their mantelpieces, rich with stories of discovery by this or that great-grandparent.

Some of these neolithic finds, like the intricately carved stone balls that turn up here and elsewhere, or the incredible newly discovered Burton Agnes and Folkton “drums”, little stone cylinders found buried with children in North Yorkshire, have no obvious practical purpose, and are decorated with designs that are obscure to our eyes, dense with irrecoverable significance.

The same goes for the ancient “cup and ring” marks that exist on naturally occurring outcrops in the British landscape, in great quantity in places like Kilmartin Glen in Argyll. “I like the idea that each is a prayer or a mantra … I think the meaning may be in the making,” muses Wilkin of the patterns.

The buildings of the Ness of Brodgar are also decorated and inscribed, thickly but often subtly, with patterns – lozenges, cross-hatching, sometimes a kind of butterfly shape. At times the marks can be hard to make out. “One building had been exposed for several years and it wasn’t until the sun hit it in a particular way that we began to see it,” Card says. “We find more in August than July, in the raking light,” adds Mitchell.

These patterns, these subtle strokes in the stone, have their echoes throughout the British Museum exhibition. Wilkin tells me he wanted to tell a story of influence and connection, of ideas travelling beyond the horizon, of people on the move. That starts with those who trudged across Doggerland when Britain’s east coast was still connected to continental Europe, and continues with those who brought farming to Britain from across the Channel about 6,000 years ago, to the “Beaker people” who arrived from around 2500BC, all but replacing them.

The story is almost unimaginably long, told through artefacts from the haunting headdress fashioned by hunter-gatherers from deer antlers 11,000 years ago in Star Carr, Yorkshire, all the way to the outrageously strange conical hats fashioned from gold in France and Germany 10,000 years later. Not to mention the spellbinding teacup-size vessel, shaped from a single lump of amber about 1750BC, that’s a treasure of the Hove Museum and ought to be better known, and what I can’t help thinking of as “the amber spyglass” – a disk of translucent amber set in bronze, made in Denmark around 1200BC, that might once, possibly, have been use to “catch” the sun.

Why the peoples of Orkney, and Wiltshire, and many other places in Britain, built vast monuments of stone 5,000 years ago, is a question that can never be definitively answered – and when we try, we almost certainly say more about ourselves than the real intentions of our distant ancestors.

When I ask Edmonds what he thinks – we are standing in the little reconstructed neolithic house at Skara Brae at the time, sheltering from a hailstorm with a flask of coffee – he offers one word, albeit with a question mark: “Hubris?” Humans, he argues, seem to build remarkable monuments when they are either establishing power – or feeling under threat or pressure.

Maybe these far distant people, their lives so alien and so unreachable, would find something to recognise in us, after all.