In past conflicts Russia could hide small scale casualties, but not any more. 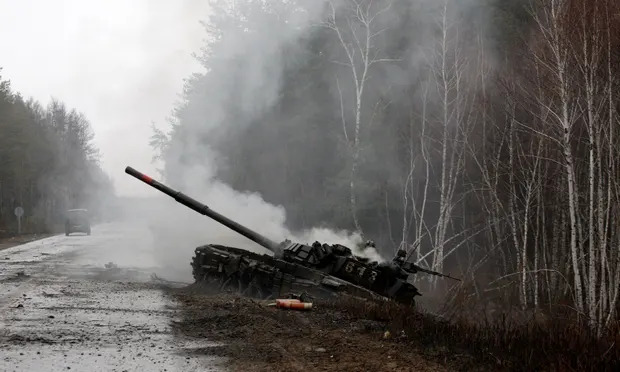 By Jack Watling
Last modified on 2022 Mar 06
–
When senior British officers visited Moscow in the days before Russia’s invasion of Ukraine, the chief of the Russian general staff, Valery Gerasimov, boasted that he commanded the second most powerful army in the world. A week into the conflict, however, the Russian military has been performing abysmally. The gap between Russian military expectations and its actual performance shows what it has and has not learned over the last 14 years of military modernisation, and how it is likely to continue its war in Ukraine.
–
After its unsatisfactory combat performance during the invasion of Georgia in 2008 the Russian military embarked upon a sustained programme of rearmament. Russia poured around $159bn a year into its armed forces when measured on the basis of purchasing power parity (PPP). That has created a force with a vast fleet of modernised main battle tanks, artillery, air defences, and long-range cruise and ballistic missiles. Whereas in the cold war the Soviet army expected to depend upon nuclear weapons to win any high-intensity conflict, the modern Russian army aspired to fight with speed and precision.
–

Parallel to this rearmament was a growth in the conceptual importance of non-lethal military activity. Obsessed with “colour revolutions” the Russian military set about using intelligence officers and special forces to try to divide adversary societies from within. The theory was that if an enemy’s forces can be turned on themselves, if information can be controlled, and if trust in a country’s leaders can be undermined, then victory could be achieved with a minimal use of force.

Russian military operations since 2008 had partly validated Russia’s expectations. In Crimea in 2014 the combination of information operations and speed saw the peninsula seized almost without fighting. In the Donbas region and in Syria, the Russian military found itself with contained conflicts against enemies who could not effectively strike back. In Syria this was because of the limitations of the Syrian opposition’s capabilities. In Donbas it was because Ukraine was politically deterred from decisive counterattacks by the threat of escalation. In these combat laboratories Russia practised integrating electronic warfare and artillery, began to link up its special forces and its air force, and demonstrated that it could manufacture and field precision weapons.

It is important to note the limitations of Russia’s experiences in Donbas and Syria, however. First, the scale of Russian operations in both countries was small. The Russian air force may have bombed hospitals precisely, but it did so with flights of two to four aircraft during the day against an adversary with very limited air defences. Russian ground forces rarely operated in larger formations than company groups of a couple of hundred people. These were also disproportionately special forces or mercenaries. They were not always brave, but they were psychologically prepared for combat.

The invasion of Ukraine is a very different war. Russia has deployed more than 190,000 personnel against a Ukrainian military of more than 200,000 soldiers and many more volunteers. Just preventing units becoming ensnared in massive traffic jams requires a feat of planning and coordination. Against an enemy with an air force and air defences Russian pilots must fly low level, at night, and still synchronise passes by multiple aircraft against their targets without crashing into one another. Doing this reliably requires a lot of experience and training. While some Russian units are highly proficient, the skills of the forces it has sent into Ukraine vary wildly.

The cause of Russia’s military debacle in Ukraine however lies in its callousness towards human life, Ukrainian and Russian. Throughout the war in Donbas, the families of Russian soldiers killed in action were told their relatives had died in training accidents. In Syria, Russia orchestrated the targeting of civilian infrastructure to break the will of the resistance, while waging a relentless propaganda campaign against civilian medical organisations trying to save lives.

For the Ukrainian people, watching what Russia has done to Syria and Donbas, the will to resist is strong. Putin has framed the war as the correction of a historical mistake that brought about Ukraine’s existence. The struggle is viewed by Ukrainians as existential. Russia’s attempts to divide Ukrainian society therefore have failed utterly.

A question from Lviv to the world: are you going to leave us to face the Kremlin’s madman alone?  Sasha Dovzhyk

Russia’s ruthless treatment of its own soldiers, while concealable at a small scale, has now brought about operational repercussions. Having not told its troops that they were about to go to war, its army has been left unprepared, logistically and psychologically. Morale is low, limiting the combat power of Russian forces. With too little time to plan, Russian logistics and communications are in disarray, slowing its pace of advance. This gives the Ukrainians crucial time to prepare their defences and organise a protracted resistance.

Unfortunately, the failure of Russia’s initial thrusts into Ukraine means it has now reverted to a more traditional reliance on heavy artillery and the surrounding of Ukraine’s cities. This shelling is indiscriminate and systematic. The aim is to break the will of the military and civilian defenders, depriving them of water and food and killing them with fires. This is currently being carried out against Kharkiv and Mariupol, and the Russians are trying to position themselves to similarly attack Kyiv. Putin set out to reunite a fellow people. Instead, he is making a desert and calling it peace.