The 1MDB swindle is one of the most remarkable cases to hit New York’s justice system in years – but the trial poses a number of unanswered questions. 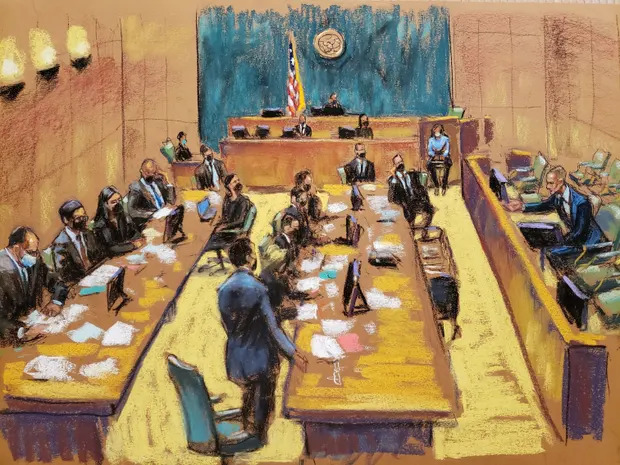 By Edward Helmore in New York
2022 Mar 06
–
It started, at least in terms of the public’s recognition, with a giant spending spree that reads like a Christmas wishlist for a billionaire.

Picasso’s Women of Algiers for $179m; $100m to fund the production budget of Martin Scorsese’s The Wolf of Wall Street and a $600,000 Oscar statuette given to Marlon Brando for best actor in On the Waterfront – a gift for the movie’s star Leonardo DiCaprio. But it did not stop there: there was also a custom-built megayacht; a Beverly Hills hotel; a $415m stake in EMI music publishing; and a transparent grand piano.

The money had come from 1MDB, a Malaysian sovereign wealth fund connected to Malaysia’s then prime minister, Najib Razak, that had been looted of $4.4bn by then 34-year-old Low Taek Jho, known as Jho Low.

Najib was himself accused of receiving $681m from 1MDB – a claim he has denied – while Low, subject to an Interpol red alert and believed to be in China, struck a deal to return $1bn under the US Kleptocracy Asset Recovery Initiative. Low said the settlement was a “a successful and satisfactory result”.

The astonishing 1MDB swindle has now reached Brooklyn federal court in one of the most remarkable cases to hit New York’s justice system in years. It has it all: Hollywood, corruption, some of the biggest names in arts, business and politics and eye-popping sums of money.

According to prosecutors, Low, and two bankers from Goldman Sachs, the most prestigious of US investment banks which reported $21.64bn in net earnings last year, conspired to pay $1bn in bribes to Malaysian and Abu Dhabi government officials, in order to win Goldman $6.5bn in bond offerings.

For the past two weeks, the one-time Goldman Sachs star banker Tim Leissner, 50, has been testifying against a former head of Goldman in Malaysia, Roger Ng, 49, who has pleaded not guilty to laundering billions of dollars embezzled from the fund, known formally as 1Malaysia Development Berhad.

Sixteen months ago Goldman pled guilty to a criminal charge and paid $5bn in fines for its role in the fraud that Ng’s own lawyers, in attempting to shift responsibility to Low, have called “perhaps the single largest heist in the history of the world”.

The trial has produced some surprising moments, among them Leissner’s claim that Low claimed to have a “dialogue” in Beijing with Jared Kushner, Trump’s son-in-law and a senior White House adviser, and others in Trump’s inner circle to shut down the 1MDB inquiries.

A person familiar with Kushner’s schedule told Bloomberg Kushner had never met with Low or spoken to him during his time in the White House. But a top Republican fundraiser had. In 2020, Elliott Broidy pled guilty to illegally lobbying the administration on Low’s behalf for a fee of $6m – with $100m more to come if the case was dropped.

But the case has raised eyebrows for other reasons.

Leissner, once one of Goldman’s highest-flying executives who paid $43.7m in fines as part of his plea, has had his credibility challenged on the stand by Ng’s lawyers, who claimed that he was married to two different women when he married Kimora Lee Simmons, the model, reality TV star and Baby Phat designer, in 2014.

On the stand, the German-born former chairman of Goldman’s south-east Asia division confirmed that – while in the middle of seeking a quick divorce from his first wife without her knowledge in the early 2000s – he wed a Goldman colleague.

“Tim Leissner uses people,” Ng’s defense lawyer Marc Agnifilo told jurors last month. He was “married to two different women at the same time, twice” and that he had an “illicit” relationship with another, Agnifilo said in opening statements.

“I have lied a lot sir, and I have regretted those choices,” Leissner said under cross-examination this week.

Simmons lawyers have said their client did nothing wrong – and that communications between Simmons and Leissner are protected under marital privilege laws. But Ng’s attorneys said that privilege doesn’t apply since her ex-husband admitted he forged divorce papers to marry her.

But the stunning details of the case and the distractions of the luxury lifestyles on display throughout the 1MDB saga, obscure what may be the government’s central purpose. According to sources close to Leissner, the government is looking to personalize corporate crime. After the 2008 market crash, that saw the destruction of Lehman Brothers, Bear Stearns and the UK lender Northern Rock, there were no prosecutions of executives who greenlit reckless lending policies.

Instead, taxpayers shouldered the bail-outs and – subject to stricter balance sheet requirements – the banking system went on its way.

But a 2015 memo by the then deputy US attorney general, Sally Yates, enunciated new guidelines. “A corporation only acts through individuals, investigating the conduct of individuals is the most efficient and effective way to determine the facts and extent of any corporate misconduct,” Yates wrote.

The memo was updated in 2020 with a set of principles, that argued individual accountability “deters future illegal activity, incentivizes changes in corporate behavior, ensures that the proper parties are held responsible for their actions, and promotes the public’s confidence in our justice system”.

That instruction, in broad terms, accounts for the recent challenges to an immunity deal reached by some members of the Sackler family as part of the Purdue Pharma bankruptcy action; FBI raids on two homes – one in Washington and one in New York – connected to sanctioned Russian oligarch Oleg Deripaska in October last year; and efforts to turn the Trump Organization CFO, Allen Weisselberg, against his boss, the former US president.

–
It’s good policy to penalize corporations for corporate criminal conduct, but also hold individuals for causing or allowing it to take place

“Corporations are fictions – they act only because people in positions of authority are causing the company to act in ways that result in corporate criminal conduct,” said Rick Mountcastle, assistant attorney general for Virginia, who led the investigation and prosecution of Purdue Pharma and three executives.

“There’s not much deterrent in prosecuting a corporation. The corporation gets fined, it’s a cost-of-doing-business, and there’s no incentive for that corporation or others to change their conduct. So it’s good policy to penalize corporations for corporate criminal conduct, but also hold individuals for causing or allowing it to take place.”

But the 1MDB conspiracy prosecution in Brooklyn poses a number of unanswered questions.

Charles Elson, director of the Center for Corporate Governance at the University of Delaware, said the prosecutorial effort involved in putting Ng on trial may suggest the government is looking to “hook bigger fish” than either the defendant or Leissner.

“Usually, the prosecution of lower-level individuals is not the ultimate goal. They’re usually looking for individuals in the organization who created a culture that allowed this to occur or that may have sanctioned this,” Elson said.

Ng’s lawyers contend their client is a scapegoat for “corporate-wide” failures at Goldman that enabled the fraud. In its deal with prosecutors, the bank looked to recoup or withhold more than $100m in executive compensation from former chief executive Lloyd Blankfein and cut the 2020 pay package of current CEO David Solomon one-third to $10m.

The larger question may be how the scandal affects Goldman’s reputation. The bank has been attempting to stay out of the spotlight ever since Blankfein made an ill-timed remark about “doing God’s work” and US reporter Matt Taibbi described as “a great vampire squid wrapped around the face of humanity, relentlessly jamming its blood funnel into anything that smells like money”.

In court last week, attorneys for both the government and Goldman were keeping a watchful eye on the proceedings. “It’s popular from a political standpoint, because financial firms never engender great love from the public,” said Elson, “and it sends the message that no one is over the law. Other, less connected firms, should certainly be concerned.”