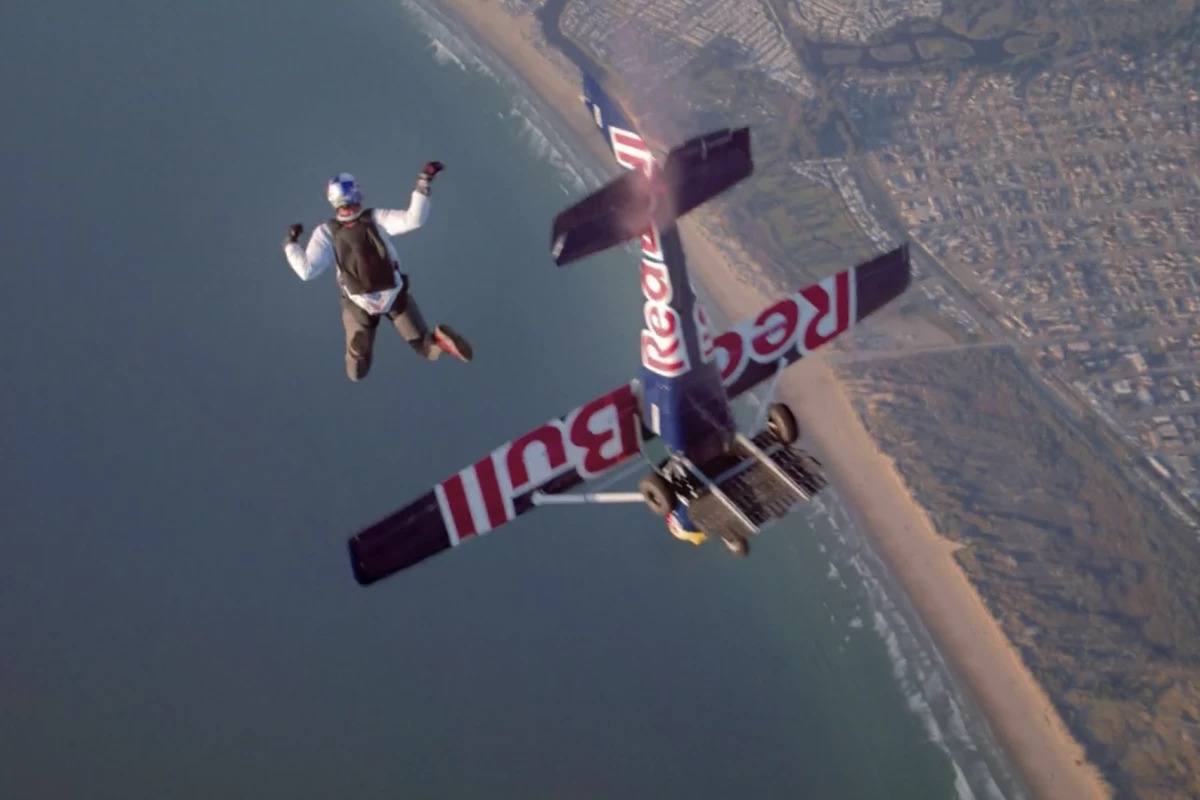 This image, presumably from a training prep run, shows one of the skydiving pilots approaching a nose-diving plane.  Red Bull

–
By Loz Blain
2022 Mar 17
–
Back in 2017, Red Bull filmed a pair of BASE-jumping wingsuit pilots jumping off a mountain top and into a passing plane, but it’s about to top itself with something far crazier. The next great Red Bull stunt will be a live-streamed event, as two pilots attempt to swap planes mid-air.

Red Bull is a truly remarkable company. Its original high-caffeine, high-sugar, taurine and vitamin-B-enriched beverage kick-started the global “energy drink” market back in the 1990s and has shot its founders to multi-billionaire status.

Where most soft drink companies pour massive money into traditional marketing, Red Bull has found a different way to get its name out there, by funding and supporting an enormous range of extreme sports events, plastering them with logos, filming them in spectacular fashion and sitting back as they’re shared organically just by virtue of their sheer nuttiness.

No company has done more to elevate fringe adrenaline sports and daredevils in recent times. It’s hard to imagine who else would fund a supersonic skydive from outer space, or lift an F1 car up onto a helipad on Dubai’s Burj-al-Arab and film it doing donuts. Red Bull’s stunts are legendary.

Plane Swap, which will be streamed live to add to the stress, promises to be right up there with the wildest stunts these guys have ever filmed. Luke Aikins and Andy Farrington will pilot a pair of planes to around 14,000 feet (4,267 m) – about the altitude of a regular skydive. They will then jump out, leaving the planes pilotless and nosediving toward the Earth.

“Air brakes” – basically big boards hung under the wheels – will slow the planes’ descent somewhat as they plummet downwards, completely out of control, while Aikins and Farrington attempt to skydive their way across to each other’s aircraft, get in and wrestle them back into level flight before they crash. A typical skydive from this altitude gives you a couple of minutes to free fall before pulling your parachute, so presumably that’s about the time window these guys will be working with.

Forty-eight-year-old Aikins has some form in this kind of work; in 2016, he jumped out of a plane at 25,000 ft (7,620 m) with neither a parachute nor a wingsuit on, free-falling all the way down before being caught in a 100-by-100-ft (30-by-30-m) Dyneema net. Farrington, on the other hand, is the youngest member of the Red Bull Air Force team at 39, and while his CV isn’t quite as wild as Aikins’, he’s a highly experienced pilot with thousands of skydives and BASE jumps under his belt, as well as stunt performances in Transformers 3 and Iron Man 3.

The stunt will be going down in Arizona on April 25th, and it’ll be live-streamed on Hulu. Godspeed, you maniacs. You can watch a trailer here.