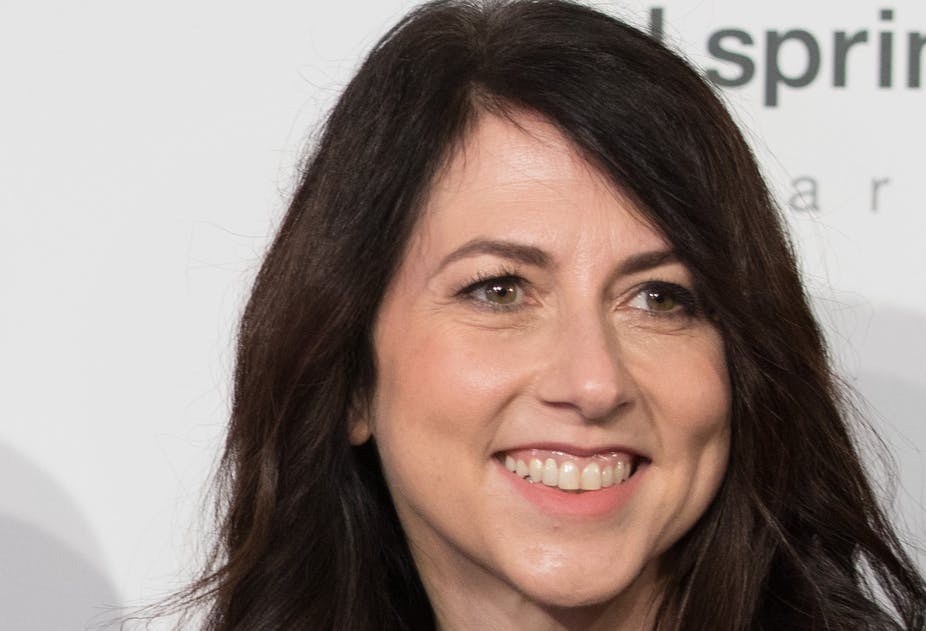 By Tyrone McKinley Freeman, Associate Professor of Philanthropic Studies, IUPUI
Published: 2022 Mar 28
–
MacKenzie Scott disclosed on 2022 Mar 23, that she had given US$3.9 billion to 465 nonprofits in the previous nine months. These no-strings-attached donations bring the total she has given away in the past two years to at least $12 billion. We asked philanthropy historian Tyrone Freeman to weigh in on Scott’s approach to donating large sums of money and her emphasis on other forms of generosity.

After her 2019 divorce from Jeff Bezos, Scott signed the Giving Pledge, a commitment that extremely affluent people make to give away at least half their wealth.

The pledge’s signatories may write a letter summing up why they are giving so much to charity and what their priorities are, which gets posted to the internet. Scott did that and amended the letter when she remarried. What makes her stand out from others who have signed the Giving Pledge is that she continues to write about her donations and what she’s learning about giving in general. As a historian of philanthropy, I study the philosophies and motivations of donors, which I call their “gospels of giving.”

Her approach is clearly unique among her peers – other billionaire donors – because of how she relates to the organizations she supports and the diversity of those causes. She says her overarching goal is “to support the needs of underrepresented people from groups of all kinds.”

Scott values the expertise of the groups she supports and their leadership. She says she doesn’t adhere to the conventional concept of philanthropy, and she questions the way many of us think about generosity. To her it is not just a numbers game. It’s more about the spirit of giving, the sacrifice in the gift.

One major difference is that very wealthy donors tend to drill down in a single focused area, such as higher education, or a few causes – perhaps the arts or medical research. There are advisers who often recommend this approach to have the most impact.

But the nonprofits she has funded cover pretty much everything charitable donors support, from education to health, from social justice to the arts. Her latest donations even include global organizations like CARE and HIAS that are serving the needs of Ukrainians whose lives have been turned upside down.

Which other gifts stand out?

Some of the largest gifts among the most recently announced are for Girls & Boys Clubs of America, Communities in Schools, Habitat for Humanity and Planned Parenthood Federation of America.

I think it’s important that she didn’t give to only their affiliates in major cities. Foundations have been underinvesting in rural America for years. Scott’s supporting dozens of local and regional affiliates in suburban and rural counties.

As I have explained before, her support for historically Black colleges and universities is important. Two recent gifts that she made, to Meharry Medical College and Charles R. Drew University of Medicine and Science, $20 million apiece, were very significant in light of how elite white donors undercut Black higher ed institutions in the early 20th century.

Does it matter when she publicly discloses information?

Scott posted an update in December 2021 without any details about her latest donations.

Instead, she praised other forms of giving by people without billions to their name. One thing she has drawn attention to is how there’s a lot of informal giving, and that it’s not valued. This puts Scott where the average person is, especially in communities of color, where people look after neighbors and family members regularly in their giving.

Since these are charitable activities you can’t deduct from your taxes, you might not think of these helping behaviors and many forms of civic engagement as philanthropy.

Unlike nearly all donors operating on a big scale, she has no offices and, so far, no website. She’s been criticized for a lack of transparency, especially after she didn’t divulge details in December. This sentiment has to do with the widespread belief that the public has a right to know when private interests spread their resources around for public benefit.

Her blog posts draw attention to trends people might miss regarding the groups she supports. She states the percentage of these organizations that are led by women, people of color or people she says have “lived experience in the regions they support and the issues they seek to address.”

When somebody shows you how they’re thinking about their giving and what they support, that could have an impact on others. It may change whether they donate only to their alma mater, for example. Colleges and museums are used to getting these big gifts, but many of the organizations Scott is giving tens of millions of dollars to say these are the largest donations they’ve ever received. She’s shattering the notion of who is a worthy recipient – the unspoken idea that only the elite institutions and the most well-known are worthy of big gifts.

[Get the best of The Conversation, every weekend. Sign up for our weekly newsletter.]

How does Scott talk about giving that isn’t purely monetary?

For her it’s about generosity, not just dollars. She’s definitely thinking beyond the tax breaks she’ll get for charitable gifts.

Her December 2021 post alludes to volunteering and other activities she calls the “work of practical beneficence” practiced by millions of people, estimating that it’s worth about $1 trillion. Researchers have reached similar conclusions.

She also highlighted the estimated $68 billion in annual global remittances in that post. When people come to this country, begin working and send money to their homelands, that is a form of philanthropy. They may not use the word, but it’s the same idea, because it’s giving back to your family and your country of origin, and it responds to the same motivation as a donation to an established charity.

I agree that there’s much more to American philanthropy than the roughly half a trillion dollars donated annually. There are other kinds of giving that fly below the radar screen that are important for survival, community-building, meeting basic needs and even for democracy.

She also addresses the role and value of using your voice as an important part of social change. The history of the abolition, women’s suffrage, civil rights movements and various movements today bear this out. That is something I focus on in my research.

What do you hope the public takes away from Scott’s approach to giving?

Scott has emerged as the most notable practitioner of what’s called trust-based philanthropy. That refers to the notion that there should be fewer strings attached to donations and that reporting requirements and other expectations that often come with grants from foundations can be excessive.

In December 2020, Scott mentioned that she has a team of advisers to help her with screening, although she hasn’t shared what that process looks like. But after that, she is not asking anything else of the organizations she funds. Instead, she has chosen to step back and let them exercise responsibility, giving them space and flexibility.

I hope the public hears her answers to what I like to ask: Who counts as a philanthropist and what counts as philanthropy? I agree with Scott that it’s about more than money and that philanthropy is not only the domain of the wealthy.

Tyrone McKinley Freeman does not work for, consult, own shares in or receive funding from any company or organization that would benefit from this article, and has disclosed no relevant affiliations beyond his academic appointment.

IUPUI provides funding as a member of The Conversation US.

Keep up with the global economy

COVID, the metaverse and what’s happening in Ukraine all have impacts on business we need to be aware of. This is why I co-write a weekly business and economy email newsletter. It brings a curated summary of the week’s briefings from academic experts around the world straight to your inbox. And it’s free.

Write an article and join a growing community of more than 143,700 academics and researchers from 4,332 institutions.
–