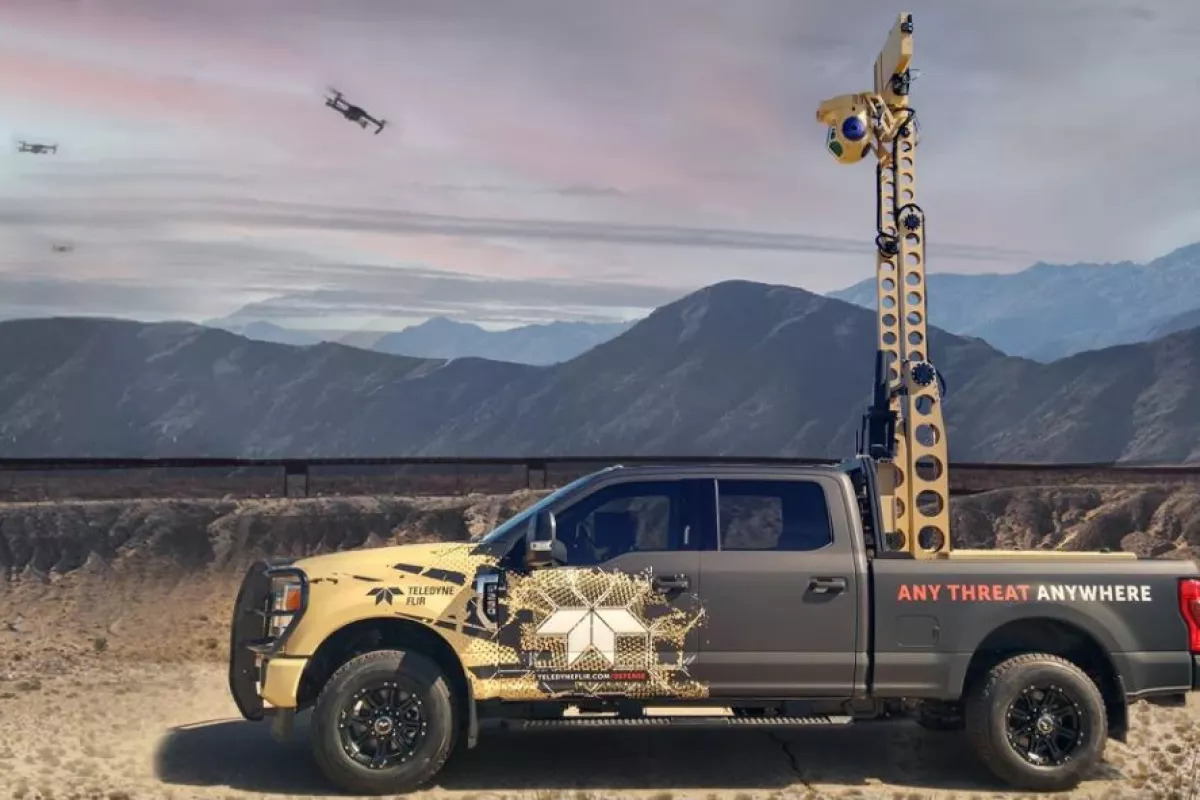 The Teledyne LVSS mounts on a Ford pickup.  Teledyne –

Many people think of small drones as little quadcopters that take cool aerial videos and can really annoy people in parks, but these increasingly sophisticated machines have evolved to the point where the US Department of Defense regards them as posing new risks to military forces, no matter where they operate.

In recent years, nuisance incidents at civilian airports by irresponsible hobbyists have stepped up to deadly drone attacks in the United Arab Emirates and Saudi Arabia, and there have been reports of suicide drones being deployed against Russian forces in Ukraine.

There are a number of ways of countering small drones that vary greatly in size and efficacy. Using a shotgun is one approach, but there are more practical solutions out there such as quadcopters carrying nets, net-shooting guns, aimable radio jammers that look like sci-fi ray guns, suicide drones to ram invaders, high-energy lasers, and even eagles.

The LVSS is at the high end of the spectrum, like the lasers mounted on trucks or warships. Its function isn’t to deal with one or two rogue drones, but swarms that can number in the hundreds over large areas where they might be used not only as weapons, but as reconnaissance craft or smuggling platforms.

The stand-alone LVSS is designed for quick deployment and to relocate at a moment’s notice. In less than a minute it can raise its mast to a height of 16 ft (5 m) and be fully operational. On the move, it can stow its mast in 30 seconds.

Once on the job, the LVSS can cover a single section of a landscape, alternate sections, or sweep the entire hemisphere to a range of 3 km (1.86 miles) and a height of 457 m (1,500 ft). Its long-range radar and laser illuminators can track up to 500 targets in 3D simultaneously, while its TacFLIR-380HD camera can scan in the infrared and identify not only hostile drones, but potentially vulnerable aircraft using a combination of software, person-in-the-loop autonomy and artificial intelligence/machine learning.

Teledyne says that standing still or on the move, the LVSS can neutralize hostile drones to a range of 1.5 km using radio frequency countermeasures with an output of 30 Watts. No details have been released about these countermeasures, but they are likely to involve jamming of control wavelengths, sending false control signals, spoofing navigation systems, blinding sensors, or overwhelming electronics to disable them.

“Protecting vast borders, shorelines, and forward-operating bases is a job that’s been made even more difficult with the challenges posed by drones,” said Dr. JihFen Lei, executive vice president and general manager of Teledyne FLIR Defense. “The LVSS C-UAS combines sophisticated counter-drone technologies and counter-measures to make it the most effective mobile surveillance system available to combat these dangers.

The video below introduces the LVSS.

–
Military UAV New Atlas Audio
–
David Szondy
David Szondy is a freelance journalist, playwright, and general scribbler based in Seattle, Washington. A retired field archaeologist and university lecturer, he has a background in the history of science, technology, and medicine with a particular emphasis on aerospace, military, and cybernetic subjects. In addition, he is the author of a number of websites, four award-winning plays, a novel that has thankfully vanished from history, reviews, scholarly works ranging from industrial archaeology to law, and has worked as a feature writer for several international magazines. He has been a New Atlas contributor since 2011.
–
–
1 comment
Sign in to post a comment.
Please keep comments to less than 150 words. No abusive material or spam will be published.
MrB – 2022 Mar 31 – 05:24 AM
Really sorry, I know this is quite a serious subject, but at first glance I thought someone was using a giraffe in a car to knock down drones…bit mean.