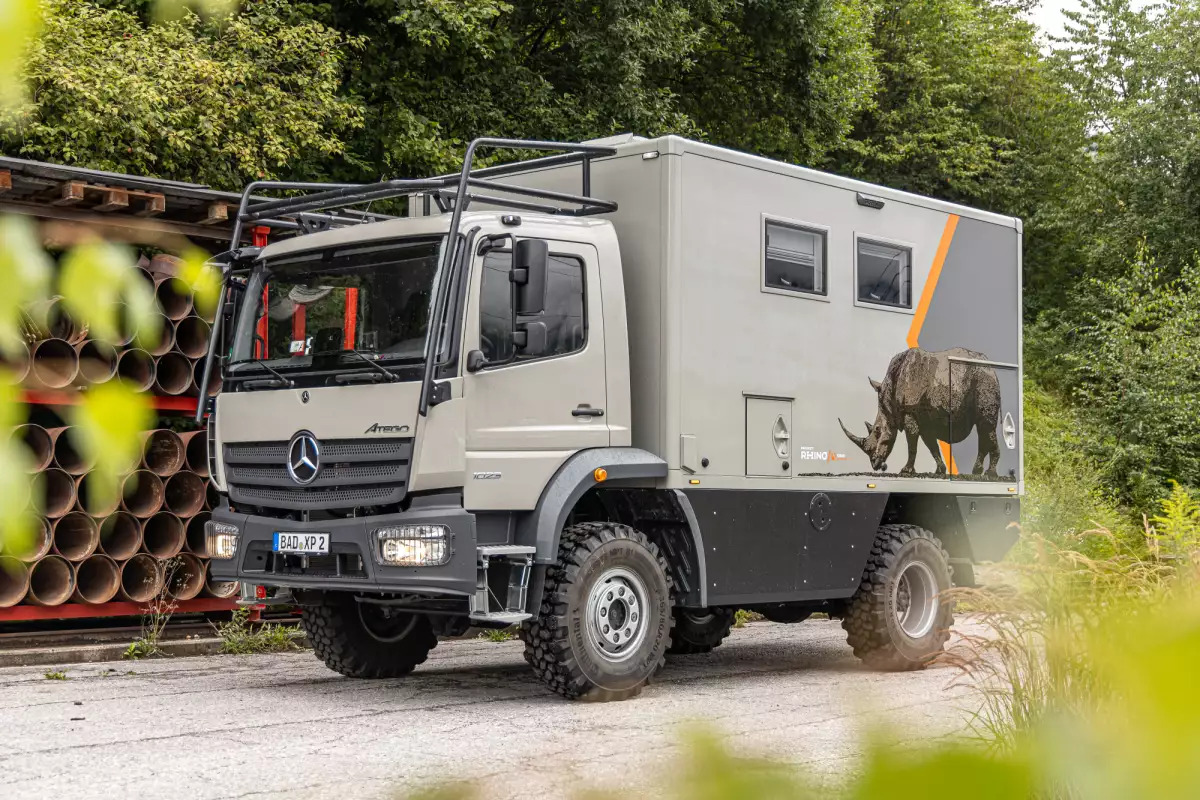 By C.C. Weiss
2022 Apr 01
–
A rugged, rock-solid shell of element-shedding armor surrounding a warm, soft core — it’s the simple formula behind any good off-road expedition vehicle, but especially the new Project Rhino from Krug Expedition. A brutalist live-in box housing a full boat of off-grid amenities atop a Mercedes Actros, the Rhino is more than just an off-road explorer, designed to promote sustainable tourism and anti-poaching efforts in the types of places through which it’s made to travel.

Ten years after its founding in 2011, Krug, a company with roots in Ukraine and a head office in Austria, worked to fill a void in its lineup for a lightweight off-roader in the 7.5-ton (16,500-lb) category. That might not sound very “lightweight” to the layman, but when your existing lineup of motorhome modules ranges from a “small” box built for nothing less than an 8-ton truck to an “XXL” best-suited to a six-wheeler, a boxy 4×4 stretching 247 in (627 cm) is a light, nimble machine. And while that’s too much truck for a standard Class B EU driver’s license, it does fall in the C1 category, which covers vehicles ranging between 3,500 and 7,500 kg.

The Mercedes Atego may lack the rough-hewn looks of the Unimog or Zetros, but it still provides a capable platform with a permanent all-wheel drive and three differential locks. The Project Rhino relies on Mercedes’ 231-hp inline-four and comes with air-sprung driver and front passenger seats with lumbar support and heating, a fold-away third seat and cruise control. Buyers can add the big roof rack, a rear-view camera and a semi-automatic tire inflation system.

The Rhino motorhome module is built from 60-mm composite panels and houses a rear-sleeper floor plan with a fixed double bed. The raised bed creates a cozy bedroom nook complete with reading lamps, ceiling lights and storage. The dual-bench dinette sits just below the front edge of the bed and uses a removable dining table. It converts over into a single bed for that third passenger who rode in on the fold-away jump seat.

A large wet bathroom fills out most of the Rhino module’s front wall, offering a shower, dry toilet and sink basin with dedicated faucet. The concealed underfloor shower tray makes for a smoother floor.

The L-shaped kitchen block stands sandwiched between the bathroom and dinette on the driver’s side wall. It includes a dual-zone induction cooktop and stainless steel sink, along with storage. The 140-L Vitrifrigo fridge/freezer is located on the passenger side wall, directly across from the kitchen block and next to the side entry door.

The Rhino’s full off-grid power system draws from a standard 300-Ah 24-V lithium-ion battery bank that can be optionally doubled or tripled in capacity. It also includes a 5,000-VA inverter/charger, 915 watts of solar, and a 50-A DC-DC converter for charging from the engine alternator.

While “Rhino” is a fitting name for any hard-nosed off-road expedition truck, Krug’s vision extends beyond mere analogy. It announced the Project Rhino last September on World Rhino Day, explaining its intentions of partnering up with Nkombe Rhino, a South African conservation association that works to protect rhinoceros and other threatened wildlife. At the time, Krug explained that the pandemic had accelerated the issue of rhinoceros poaching due to its stifling effect on local economies. Krug intends to donate proceeds from each Project Rhino sale and rental to Nkombe.

It sounds like Krug should get together with Cake and offer an optional rear carrier loaded with a Kalk or Ösa AP (Anti-Poaching) electric bike or two, perhaps tied into one of the larger battery packages so users could confidently charge the bike from the truck. That would make quite the off-grid explorer combo pack.

Krug has not published a full online price list and instead suggests interested parties contact it for a custom estimate. A listing on German online auto marketplace Mobile.de shows a €306,000 (approx. US$338,625) regular price, including VAT, for a complete Project Rhino truck with standard equipment package. The demo model listed for sale on that page is discounted down to €299,000 ($330,475), from an initial price of €326,880 ($361,275), and includes optional add-ons such as the roof rack, reverse camera and a drinking water filter system with dedicated tap.

Beyond building fully capable expedition motorhomes, Krug has also been busy using a different style of large truck to transport literal tons of humanitarian aid from Austria to Ukraine. Those interested about its efforts and potentially assisting can find more information and updates on its Facebook page.