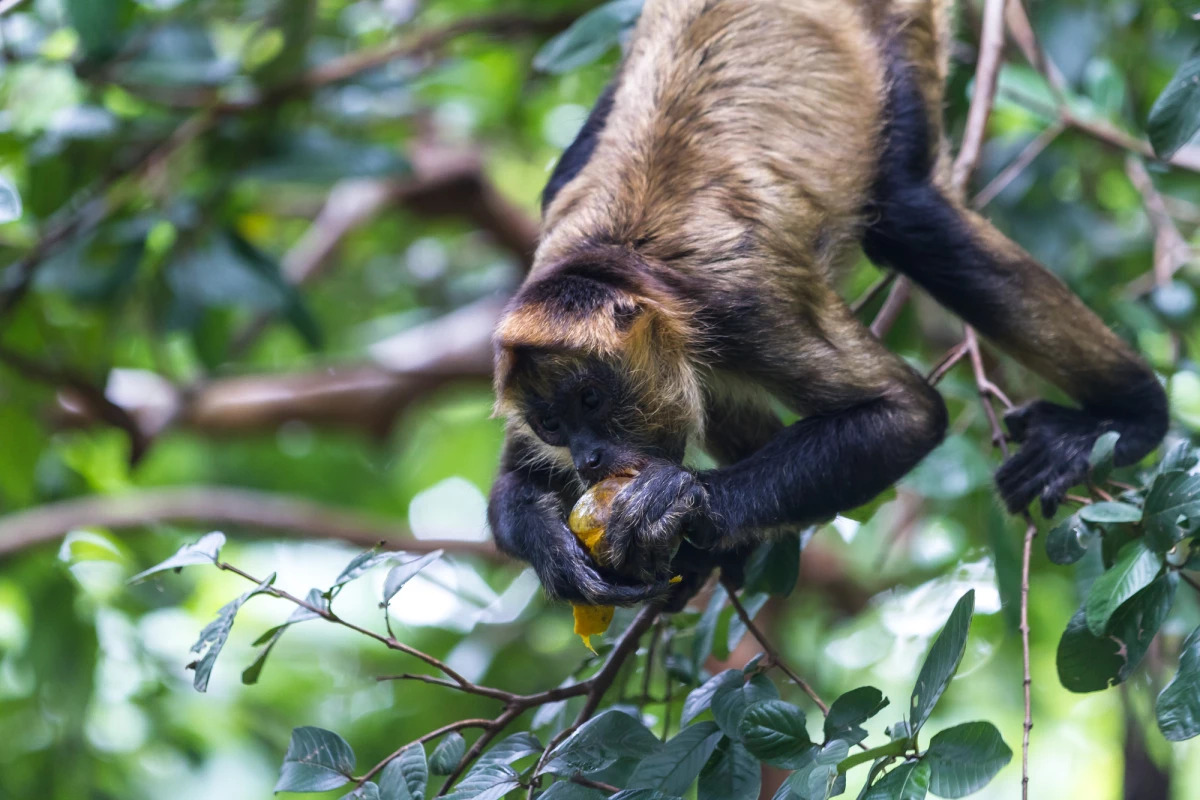 New research on the eating habits of black-handed spider monkeys shows that they metabolize the alcohol within the fermented fruit that they consume.  Depositphotos
–

The discovery stems from the long-running work of biologist Robert Dudley, who has been pondering the relationship between humans and alcohol for more than two decades. In his 2014 book titled The Drunken Monkey: Why We Drink and Abuse Alcohol, Dudley puts together an argument that humans inherited their penchant for alcohol from primates, pointing to research showing some fermented fruit they eat has naturally high alcohol content, at times as high as seven percent.

What was missing was data demonstrating that monkeys or apes prioritized these fruits over others, and that they actually metabolized the alcohol inside it. Now Dudley and fellow biology researchers at the University of California Berkeley and California State University have delved deeper into the “drunken monkey” hypothesis, turning to black-handed spider monkeys in Panamá for answers.

The scientists collected fermented fruit eaten and discarded by these monkeys and found it typically carried an alcohol concentration of between 1 and 2 percent. They took things a step further and collected urine samples from the wild monkeys which revealed the presence of metabolites from digested alcohol, demonstrating that they were actually using it for energy.

“It (the study) is a direct test of the drunken monkey hypothesis,” said Dudley. “Part one, there is ethanol in the food they’re eating, and they’re eating a lot of fruit. Then, part two, they’re actually metabolizing alcohol – secondary metabolites, ethyl glucuronide and ethyl sulfate are coming out in the urine. What we don’t know is how much of it they’re eating and what the effects are behaviorally and physiologically. But it’s confirmatory.”

It is unlikely the monkeys feel the effects of the alcohol, according to the scientists. The thinking is that they would seek out the fermented fruit for its higher concentration of calories, which equates to more energy. The fruit in question, taken from the jobo tree, have also been used by indigenous populations for thousands of years to make an alcoholic beverage called chicha. The scientists believe that, like the monkeys, our ancestors were lured toward the fermented fruit for its higher calorie content.

“For the first time, we have been able to show, without a shadow of a doubt, that wild primates, with no human interference, consume fruit-containing ethanol,” said Christina Campbell who led the study. “This is just one study, and more need to be done, but it looks like there may be some truth to that ‘drunken monkey’ hypothesis — that the proclivity of humans to consume alcohol stems from a deep-rooted affinity of frugivorous (fruit-eating) primates for naturally-occurring ethanol within ripe fruit.”

The research was published in the journal Royal Society Open Science.