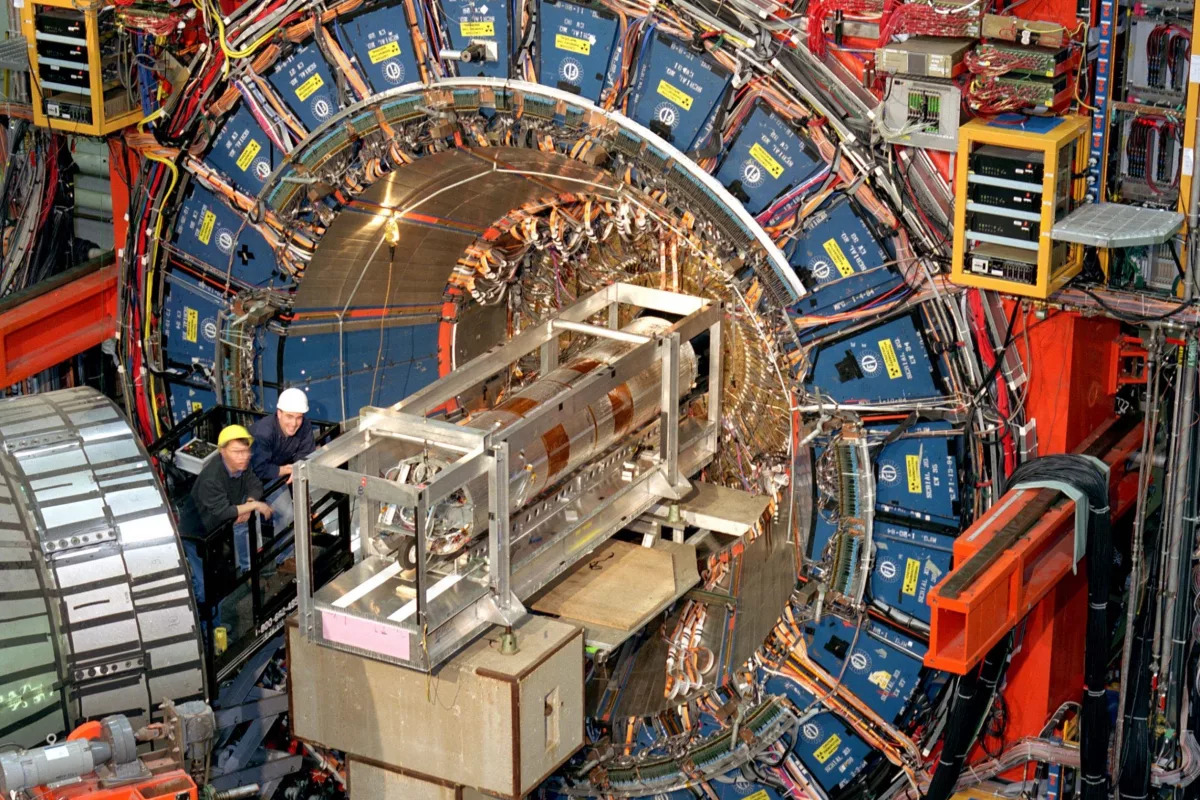 The Collider Detector at Fermilab (CDF), data from which has allowed physicists to make the most precise measurement of the mass of the W boson.  Fermilab
–

Since it was developed in the 1970s, the Standard Model of particle physics has been extremely successful at explaining the interactions of particles and most fundamental forces. It doesn’t cover everything – major missing pieces include dark matter and even gravity – but what it does cover, it covers very well, consistently standing up to experiments that test its predictions.

But now, a well-studied particle may be threatening to poke a hole in that neat model. The mass of particles can be calculated through their relationships with other particles in the Standard Model, and this predicted mass can then be compared to actual measurements made in particle colliders, to test the internal consistency of the Standard Model. This process has now led to a major discrepancy, thanks to an unassuming particle called a W boson.

W bosons are elementary particles that carry the weak force, mediating nuclear processes like those at work in the Sun. According to the Standard Model, their mass is linked to the masses of the Higgs boson and a subatomic particle called the top quark. In a new study, almost 400 scientists on the Collider Detector at Fermilab (CDF) collaboration spent a decade examining 4.2 million W boson candidates collected from 26 years of data at the Tevatron collider. From this treasure trove, the team was able to calculate the mass of the W boson to within 0.01 percent, making it twice as precise as the previous best measurement.

By their calculations, the W boson has a mass of 80,433.5 Mega-electronvolts (MeV), with an uncertainty of just 9.4 MeV either side. That’s within the range of some previous measurements, but well outside that predicted by the Standard Model, which puts it at 80,357 MeV, give or take 6 MeV. That means the new value is off by a whopping seven standard deviations.

Further cementing the anomaly, the W boson mass was also recently measured using data from the Large Hadron Collider, in a paper published in January. That team came to a value of 80,354 MeV (+/- 32 MeV), which is comfortably close to that given by the Standard Model.

So what’s going on? Some physicists not involved in the study are more comfortable siding with the Standard Model, which is understandable.

“All these measurements claim to measure the same quantity,” said experimental physicist Martin Grünewald, in a report by Science. “Somebody must be, I will not say wrong, but maybe made a mistake or pushed the error evaluation too aggressively.”

But the scientists on the new CDF analysis say that the procedures they used to reach their figure were properly scrutinized over many years. In fact, the final measured value was hidden from the analyzers until those quality checks were completed.

“The number of improvements and extra checking that went into our result is enormous,” said Ashutosh Kotwal, lead author of the CDF analysis. “We took into account our improved understanding of our particle detector as well as advances in the theoretical and experimental understanding of the W boson’s interactions with other particles. When we finally unveiled the result, we found that it differed from the Standard Model prediction.”

If the new figure is verified, it could hint at unknown particles or new physics beyond the Standard Model, which are interfering with the expected interactions. After all, we already know that this framework is incomplete, and further investigations could help unravel the mystery.

“It’s now up to the theoretical physics community and other experiments to follow up on this and shed light on this mystery,” said David Toback, CDF co-spokesperson. “If the difference between the experimental and expected value is due to some kind of new particle or subatomic interaction, which is one of the possibilities, there’s a good chance it’s something that could be discovered in future experiments.”

2 comments
Sign in to post a comment.
Please keep comments to less than 150 words. No abusive material or spam will be published.
–
FB36 – 2022 Apr 08 – 08:25 AM
IMHO, discrepancies detected in w-boson & muon mass maybe because SM definitely still missing a particle!

IMHO, Black Holes should/must be made of particles (just like Neutron Stars)!
& there is only 1 possible particle they could be made of: Planckion (Planck Particle)! (Which was theorized decades ago!)
(Imagine a particle that already has minimum possible size (Planck length) & maximum possible mass/density (Planck mass)! & so it cannot be crushed or compressed any further (towards a singularity)!)
& so, SM should/must have Planckion as a currently missing member!
How to prove that?:
Realize that, if Planckion really is a member of SM then results of many theoretical calculations (involving/considering FULL set of SM particles) would change!!!
Then, it just need to be checked, if old calculations were closer to all experimental results/measurements or the new ones!!!
–