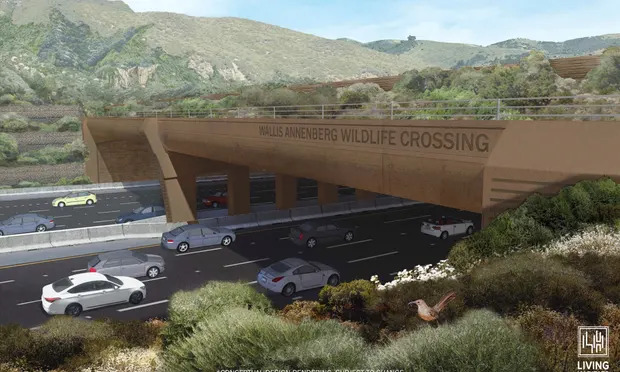 Rendering of the Wallis Annenberg wildlife crossing, which will span a busy section of highway near Los Angeles, allowing animals to pass safely. Photograph: Living Habitats and National Wildlife Federation
–
By Katharine Gammon in Los Angeles
2022 Apr 09
–
Imagine cruising down a 10-lane highway and knowing that, high above your head, a mountain lion is quietly going along its way. This remarkable image could soon be reality for drivers on one of California’s busiest roads, as the world’s largest wildlife overpass begins construction this month.

The history-making project will comprise a green bridge built across the 101 highway near Los Angeles, creating a corridor between two parts of the Santa Monica mountains. Stretching 210ft long and 165ft wide, the overpass will allow safe passage for lizards, snakes, toads and mountain lions, with an acre of local plants on either side and vegetated sound walls to dampen light and noise for nocturnal animals as they slip across.

The project, nearly a decade in the making, comes at a crucial time. Highways in this car-heavy landscape crisscross critical habitat for the protected mountain lions and other animals, forcing them to make what can be deadly crossings. At least 25 of the big cats have been killed on Los Angeles freeways since 2002. The latest death was just weeks ago, on 23 March, when a young lion was struck and killed on the Pacific Coast highway.

Beth Pratt, an urban ecologist with the National Wildlife Federation, feels as if she is running the last mile of a marathon. Pratt has spent most of the last decade planning the project, persuading transportation officials of its importance, and bringing together stakeholders and donors to fund it. “I’m a little dizzy still, but I feel relieved: we have the chance to give these mountain lions a shot at a future.”

A groundbreaking ceremony to mark the start of construction for the $90m crossing – called the Wallis Annenberg wildlife crossing – will take place on Earth Day, 22 April. Construction will mostly happen at night and the project isn’t expected to be complete until early 2025.

The bridge’s price tag will be covered by about 60% private donations, with the rest coming from public funds set aside for conservation purposes. California’s Governor Gavin Newsom has called the project an “inspiring example” of public-private partnership.

‘A symbol of connection’

The project is breaking the mold in many ways: not only is it the largest crossing in the world, stretching over 10 lanes of one of the busiest roadways in the country, but it’s also an engineering marvel. The crossing is designed to seamlessly integrate into the mountains, offering big cats, coyotes, deer, lizards, snakes and other creatures a safe way to travel to different parts of open territory in the Santa Monica mountains recreation area – a 150,000-acre space.
–

This is restoring a piece of lost habitat, putting it back across the mountains

Robert Rock, a landscape architect with Living Futures in Chicago who led the design, says this nature-centered type of construction makes it unusual among other wildlife bridges and underpasses around the world, which are typically made of cement and steel. This one is designed to seamlessly glide into the environment on both sides – and send a message to the people driving below.

His team includes a soil scientist – who collected samples nearby that are specific to the local trees – and a mycologist, who is studying the fungi of the area and how they can help the seamless flow of plants and animals across the overpass. Docents will be posted nearby to discourage people from exploring the overpass. (Pratt says that planting poison oak and posting signs about rattlesnakes are also effective tools to keep humans off the bridge.)

Rock says he is optimistic that the investment could serve as a precedent for how design can play a restorative role in the natural world. “As both a tool for and a symbol of connection, it will stand as an alluring challenge to future generations to pick up the mantle of design to bridge the gaps elsewhere in our world,” he says.

Approximately 300,000 cars pass through this area each day, and Pratt calls it an opportunity for millions of Angelenos to see how humans can live more harmoniously with nature. “Someone could be in rush-hour traffic, and there could be a mountain lion right above them,” she says. “I think that’s such a hopeful image, and one that inspires me that we can right some of these great wrongs.”

Pratt says the plight of the region’s mountain lions caught the eye of donors from around the world. People sent money from London. A couple from Kansas who had visited the city only once donated $675,000. Leonardo DiCaprio’s foundation chipped in $300,000. Pratt points to the local celebrity mountain lion P22, whose exploits around the city have captured headlines, as a catalyst for it all. “People really took his plight to heart, and this is not just a California story: the world has come together around his cause.”

P22 won’t actually be the intended user of this crossing, since he lives in a part of Los Angeles far east of the mountain range. But his symbol helped raise the money that will fund the bridge. And most of the area’s 100 mountain lions live in the area that the bridge will span.

The scientists say there is a learning curve for animals, and they will slowly begin to explore the bridge. For wary creatures, it may take up to five years to use the crossing successfully. Cats will follow smaller prey species, who generally more quickly adapt to the new territory.

“It’s not just a solution for P22 to get across the road, as much as P22 is the face of the campaign,” says Rock. “This is restoring a piece of lost habitat, putting it back across the mountains.”

More projects in the future

Wildlife crossings are picking up speed across the country, and the world. They make economic sense – most pay for themselves in a decade or two, and a study in Banff, Canada, whose national park has more than 40 wildlife underpasses and overpasses, found a 90% decrease in wildlife-vehicle collisions, which saved the park money.

But it’s only recently that the wildlife science and infrastructure communities have come together to understand the problem deeply. Joe Biden’s $1.2tn infrastructure bill earmarked $350m for animal-friendly infrastructure like bridges, underpasses and roadside fences.

Pratt says the project struggled to raise money in the early days of planning. Luckily the team was able to find some people who recognized the importance of this project.

But perhaps the bigger challenge was philosophical: naysayers told her the project shouldn’t or couldn’t be done – “that we shouldn’t waste money on saving mountain lions in an urban area, that we would never be able to raise the funds.” She was undeterred. “I wasn’t going to take no for an answer, not when a population of mountain lions was at stake.”
–
–