A new film and play about an allied intelligence operation resonate at a time when conflict and propaganda haunt Europe again. 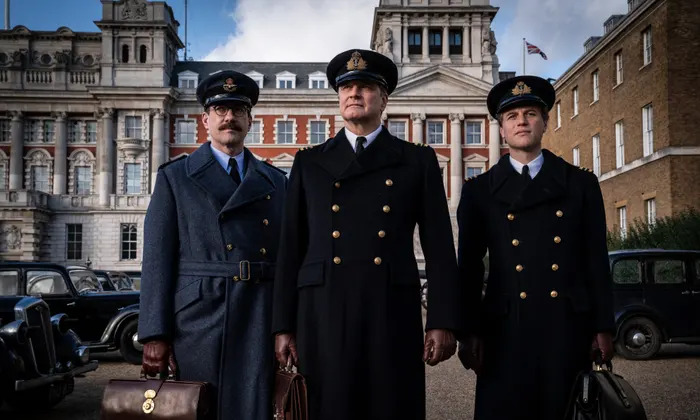 ‘They got completely obsessed by it’: Matthew Macfadyen as Charles Cholmondeley, Colin Firth as Ewen Montagu and Johnny Flynn as Ian Fleming in Operation Mincemeat Photograph: Giles Keyte/Courtesy of See-Saw Films
–
By Emma John
Last modified on 2022 Apr 09
–

In a small subterranean office at the Admiralty, a cluster of men and women wait in a state of agonizing anticipation. The Allied forces are landing in Sicily, and this small group of intelligence operatives has just bet the invasion – tens of thousands of lives – on a prankish piece of spycraft involving the body of a homeless man dressed as a pilot, carrying false news of an attack on Greece. It’s a second world war legend whose real story is no less strange than the myth that surrounds it – and something about it has clearly caught the zeitgeist.

On Tuesday a new British film revisits the story of one of the greatest single deceptions in warfare, with an all-star cast and an Oscar winner at the helm. Directed by John Madden, of Shakespeare in Love fame, Operation Mincemeat stars Colin Firth as Ewen Montagu, the former King’s Counsel who oversaw the extraordinary plan, alongside an ensemble of some of the nation’s best-loved actors, from Penelope Wilton and Simon Russell Beale to Jason Isaacs and Kelly Macdonald.

At the end of the month, meanwhile, a very different take will be seen on the banks of the Thames, at the Riverside Studios in Hammersmith. SpitLip’s Operation Mincemeat may share the same title as the movie, but it certainly doesn’t share the same approach, or a budget that can stretch to submarines packed with extras. In their comedy musical, which began life on the fringe, all the parts are played by the five-strong company, with gender-swapped roles and songs that include a Beyoncé tribute in the MI5 typing pool and a creepy pathologist channelling Cabaret.

The real-life plot was anything but simple. In 1943, Britain and its allies were preparing to land an invasion force in Sicily – but it was an obvious target, and Germany was known to be expecting the attack. As part of a campaign to mislead the German high command into diverting troops elsewhere, two naval intelligence officers, Montagu and Charles Cholmondeley, worked up a scheme to send false information back to Hitler.

Having sourced a dead body – that of a homeless man who had died eating rat poison – they created a false identity for the corpse, and conveyed it to the coast of Spain in a submarine. Dressed as “Major William Martin”, it was released to wash up on shore carrying sensitive documents that confirmed the invasion was actually to take place in Greece. German spies in neutral Spain were expected to fall for the false intelligence and pass the word back to Berlin. It was a high-stakes plan, and its execution was riddled with fumbles, twists and reversals – but it ultimately succeeded, allowing the Allies to land their troops in Italy with minimal resistance.

The sudden re-emergence of interest in this wartime tale is, in one sense, pure serendipity. The productions were conceived entirely independently, and both were put on hold for two years by Covid. But neither would have been possible without the declassification of the secret files that revealed the true circumstances of the operation – or the publication, in 2010, of a book by Ben Macintyre that pulled the various strands together. It was Macintyre who revealed just how close the operation had come to disaster, as well as the identity of Glyndwr Michael – the man whose body was effectively stolen and used as a decoy.

The book was used as the basis for the film; Macintyre is delighted that the story – which was made into a postwar propaganda movie, The Man Who Never Was, in 1956 – is being told for a new generation. “One of the reasons it lends itself to being reimagined in lots of different ways is that the whole plot was imagined,” he says. “What appeals to me is that it’s filled with people making it up – they were all frustrated novelists.”

That has become a central theme in the new film, which highlights Ian Fleming’s role as the originator of the idea, before following Montagu’s team – which included his partner-in-espionage, Cholmondeley, the head of the secretarial division Hester Leggett and her protege Jean Leslie – as they develop their plan into an increasingly labyrinthine deception. “They got completely obsessed by it, really,” says Macintyre. “They began to make up more and more about William Martin, including a girlfriend, a bank manager and an angry father, forever adding to the plot.” At one stage in the film Cholmondeley – played by Matthew Macfadyen – declaims that he’s surrounded by them. Germans? someone asks. “Writers,” he replies.

What makes an 80-year-old event, one that has gained almost folklore status, feel relevant today is our knowledge that this kind of extreme disinformation is once again being manufactured in the context of a European war. “Deception works if it appeals to the person being deceived in some way,” Macintyre points out. “So they created one designed to appeal to a romantic sensibility on the other side.

Instead, the stage show’s comic power rests in its ability to subvert expectation and provide a revisionist commentary on the establishment figures blessed with both the freedom and the extraordinary self-belief to pull off what still seems a ridiculous plan.

The establishment is not, of course, a popular concept either in politics or culture right now. When SpitLip first staged Operation Mincemeat in a tiny venue in north London in 2018, the audience reactions were very different from those it has received since returning post-Covid. “It’s been really interesting doing it while Boris has been prime minister,” says Hodgson. “People react so strongly to those characters. The first time we staged it, the comedy of these posh lads running the country felt more slapstick and silly, whereas now it feels more like satire. It only shows you how stupid politics has become.”

You certainly don’t get that kind of commentary in Madden’s somewhat conventional film – after all, you can’t hire an upper lip much stiffer than Firth’s – but it does at least nod at the ethical ambiguity of the government’s requisitioning a man’s body without getting his family’s consent (another thing the stage show is outspoken about). “With lots of the war stories you inherit, there are the goodies and the baddies, and war isn’t really like that,” says Macintyre. “Good people do bad things for the best reasons. This allows us to see it in a more human light, through flawed and complicated individuals.

“It’s about asking the question: what would you do? Which of these people would you have been? And that’s an eternal question.”

There’s a number in the stage show which manages to combine zany rap lyrics with the sobering message that fascism hasn’t disappeared since 1945 – that its ideologies are still being sold, with increasing success.

No one on either Operation Mincemeat project could have known that their work would be emerging at a time when the fate of Europe once again felt in the balance, but the work of Montagu, Cholmondeley, Leggett and Leslie clearly didn’t just alter the course of military history: its legacy lives on. There’s even a GCHQ (Government Communications Headquarters) training program entitled Operation Mincemeat, which teaches intelligence operatives how to create a fake identity online – complete with believable backstory, of course.
–
–