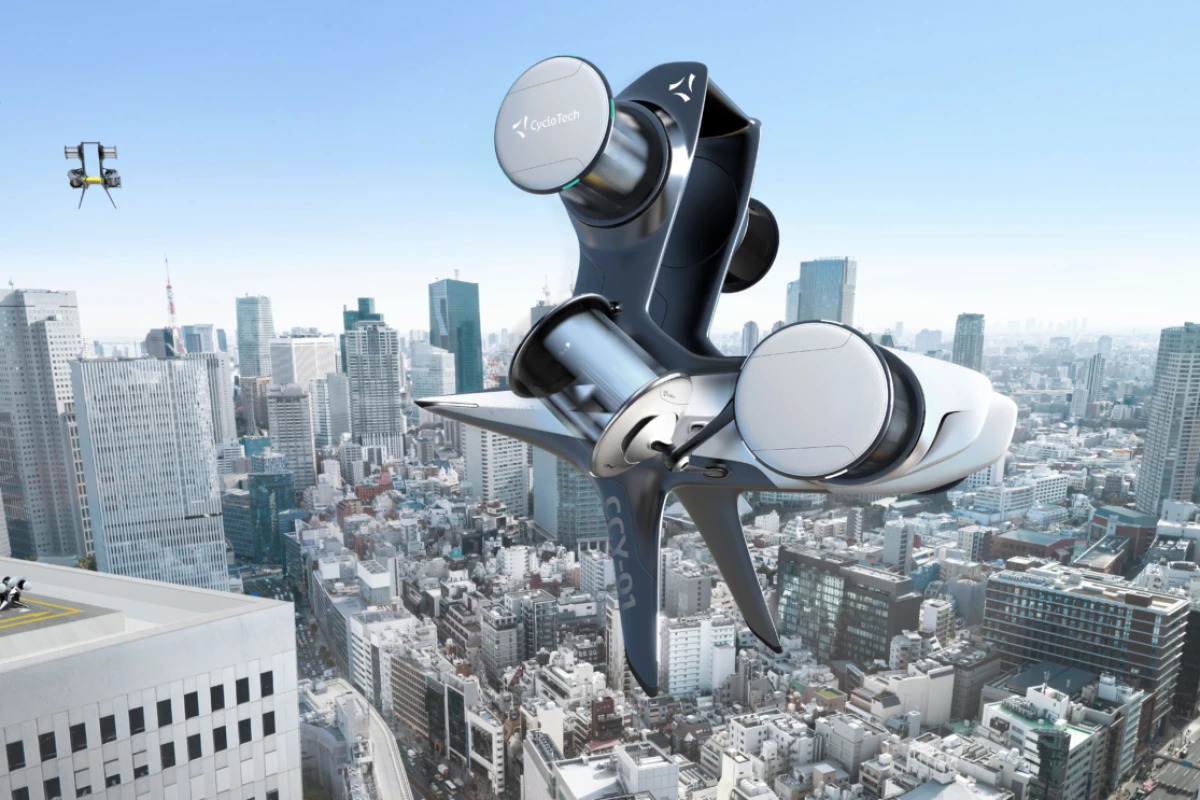 This crazy-looking aircraft flies with six of Cyclotech’s Voith-Schneider style propulsion barrels, which spin around at high RPM while blades along the length of the cylinder constantly alter their angle to direct thrust. We’ve seen these things lift and control drones before; Cyclotech presented its first test video last October, and Russia’s Foundation for Advanced Research used what seems to be a very similar system in an even earlier video.

We haven’t seen them arranged like this, though. The CCY-01, as this collaboration is called, uses four propulsion barrels as per normal, but adds an extra two angled 90 degrees backward. This gives it the capability to directly produce horizontal sideways thrust while staying level, instead of tilting sideways like a regular multicopter – Cyclotech says this allows it to easily compensate for crosswinds, particularly during landings, and it also adds another two redundant vertical thrusters in case a motor dies in flight.

The uniquely-shaped drone body is designed to accept a “Pod Unit for Parcel Air-Transportation” (PUPA) cargo pod. These are Yamato’s designs, and while the company is working on several, this study uses the PUPA701, which is built as a neat little pushcart capable of carrying about 30 kg (66 lb) of cargo.

The PUPA rolls around on retractable wheels, and can be pushed directly into a loading position between the legs of the CCY-01, upon which it’s drawn up into the airframe by a metal bar across its top, a process which stows the wheels and makes it ready to fly.

With a payload weight of 45 kg (99 lb, including PUPA), this machine would fly missions up to 40 km (25 miles) at speeds up to around 130 km/h (81 mph), requiring a 2.7 x 2.5 m (8.9 x 8.2 ft) footprint on the ground. Its odd-looking airframe, combined with those barrel propulsion units, mean that it can tilt forward into a lower-drag forward flight orientation that uses the PUPA as an airfoil, then tilt back level to land.

The CCY-01 is just a concept drone and a feasibility study at this point. Cyclotech has designed it up, and run it through a “Flight Performance Tool” for optimization.

Will it be built? Well, here’s the final section of Cyclotech’s press release: “As the advantage and feasibility of CycloRotor-applied cargo eVTOL aircraft have been successfully discovered, Yamato will accelerate pursuing the realization of a high value-adding airborne logistics operations with the technical premises expanded by this study.” We believe that’s corporate for “no.”

I really like cyclogyros, but those side-thrust rotors are much more complicated and higher drag than just putting rudders in the main rotor slipstreams. For that matter, using regular props for side thrust would be better.
–