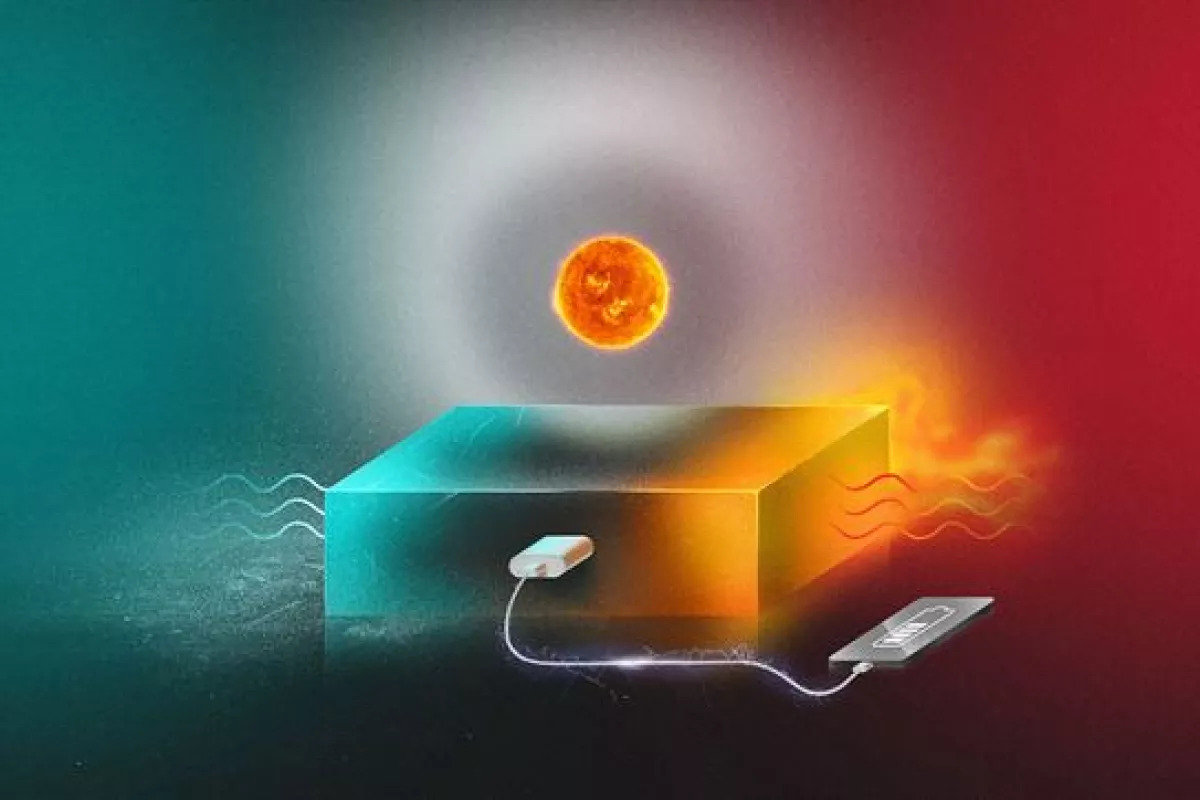 An artist’s concept of the MOST system charging a mobile device.  Chalmers University of Technology/Daniel Spacek/neuroncollective.com
–

Called the MOlecular Solar Thermal (MOST) system, the technology has been in the works for more than a decade and centers on a specially designed molecule of carbon, hydrogen and nitrogen. When it comes into contact with sunlight, the atoms within the molecule are rearranged to change its shape and turn it into an energy-rich isomer, which can be stored in liquid form.

The energy captured by the MOST system can be stored in this liquid state for up to 18 years, before a specially designed catalyst returns the molecule to its original shape and releases the energy as heat. The Chalmers team has now collaborated with scientists at China’s Shanghai Jiao Tong University, who have used a compact thermoelectric generator to turn that heat into electricity.

“The generator is an ultra-thin chip that could be integrated into electronics such as headphones, smart watches and telephones,” said researcher Zhihang Wang from Chalmers University of Technology. “So far, we have only generated small amounts of electricity, but the new results show that the concept really works. It looks very promising,”

The proof of concept’s current output is reported to be up to 0.1 nW (power output per unit volume up to 1.3 W m−3), which might be quite small but the scientists see big potential in their MOST system, which could address the intermittent nature of solar energy by storing it for months or years at a time and allow it to be tapped into on demand.

“This is a radically new way of generating electricity from solar energy,” said research leader Kasper Moth-Poulsen, Professor at the Department of Chemistry and Chemical Engineering at Chalmers. “It means that we can use solar energy to produce electricity regardless of weather, time of day, season, or geographical location. It is a closed system that can operate without causing carbon dioxide emissions.”

Having now shown that the system can be used to produce electricity, the team is focusing on improving its performance, while working toward an affordable commercial solution for charging gadgets and heating homes.

“Together with the various research groups included in the project, we are now working to streamline the system,” said Kasper Moth-Poulsen. “The amount of electricity or heat it can extract needs to be increased. Even if the energy system is based on simple basic materials, it needs to be adapted to be sufficiently cost-effective to produce, and thus possible to launch more broadly.”

The research was published in the journal Cell Reports Physical Science.

Nick Lavars
Nick has been writing and editing at New Atlas for over six years, where he has covered everything from distant space probes to self-driving cars to oddball animal science. He previously spent time at The Conversation, Mashable and The Santiago Times, earning a Masters degree in communications from Melbourne’s RMIT University along the way.
–
–
7 comments
Sign in to post a comment.
Please keep comments to less than 150 words. No abusive material or spam will be published.
–
paul314 – 2022 Apr 12 – 05:51 AM
I think they need to increase their efficiency by a few orders of magnitude for anything but the tiniest sensor applications. Even a milliwatt would take a liter of conversion cell.
–
fluke meter – 2022 Apr 12 – 09:17 AM
It would be good to know some kind of current efficiency and a guess of what the efficiency could get to. How does this compare to say fuel cell and making H with solar and then making electricity with H from fuel cell..
–
Paul Anderson – 2022 Apr 12 – 12:27 PM

TechGazer – 2022 Apr 12 – 02:01 PM
The fact that they’re using an ‘ultra-thin thermoelectric generator’, which basically means very low efficiency, implies that this is not going to have wide-spread application. They’re also not mentioning the temperature generated, which determines the maximum possible efficiency. If it’s just producing slight warming, then as paul314 said, it’ll be several orders of magnitude below what’s needed for a useful energy storage system.
–
Lamar Havard – 2022 Apr 12 – 07:30 PM
Interesting…but the renewable I’m most interested in is ‘rain power’. Collectors made of aluminum foil, PTFE (Teflon tape) gaffer’s tape and aluminum duct tape. When the rain, which has a + charge runs over the aluminum contact, it releases the charge and it is collected and stored. The guy in the YT video (Rain Fuel) said enough collectors to cover a square meter can put out 50W. A square meter solar panel puts out around 150W. Solar panels for sunshine, rain panels for LIQUID sunshine!
–
HoppyHopkins – 2022 Apr 12 – 10:34 PM
Even without thermionic electrical power generation, the material would serve a very useful purpose as a source of heating during winter and thereby reducing the need for carbon based heating systems. As a person who lives off grid, that was the first thing I saw
–
Patricia Mitchell – 2022 Apr 13 – 09:36 AM
I installed a 7.6ktl solar system on my roof. How do I take advantage of this kind of energy storage?
–