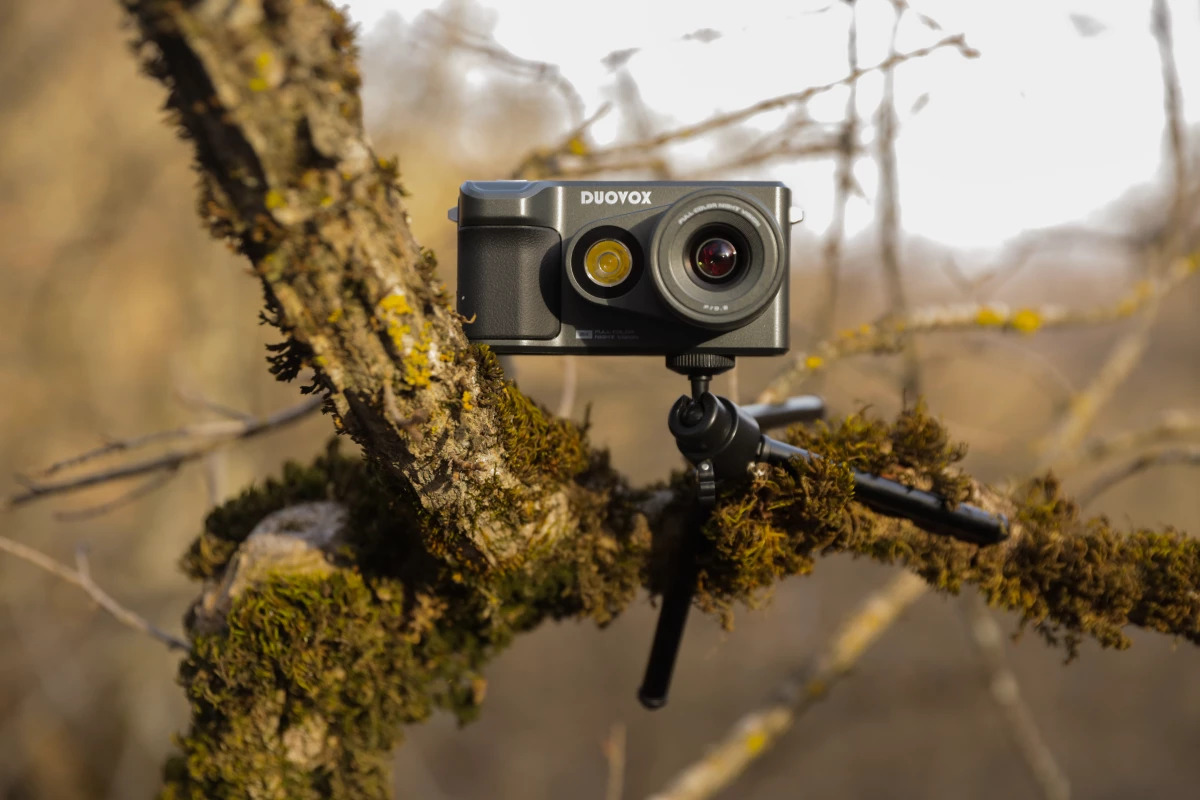 – Startup Duovox has launched a compact night vision camera with a custom Sony sensor and advanced algorithms at its heart that effectively turn night into day, bringing the full color experience to after-dark hikes in the mountains, night-time wildlife photography or even pitch black handicam horror flicks.

“We have used the latest low-light imaging technology and combined it with our own advanced AI algorithms,” said Duovox founder, David Chen. “This allows Duovox to turn an entire night-time scene into a full-color daylit photograph.”

Currently raising production funds on Kickstarter, the Duovox Mate Pro is the fourth night vision camera from Duovox and is designed as an easy carry rather than the dashcam format of previous iterations.

It’s built around a back-illuminated Starvis 2 CMOS image sensor that Sony custom made specifically for this camera. This 1/1.8-inch, 5-MP sensor is reckoned capable of capturing JPEG or RAW images or 1080p/2K video in light as low as 0.0001 lux over a 1,000-ft (304-m) focus area – that’s equivalent to being able to pick out details on a moonless, overcast night. And those images aren’t in the familiar black and white of many night vision cameras, the Duovox Mate Pro outputs in “true color.”

The camera boasts fast f/0.9 glass out front and 22 stops of dynamic range, is said to pull in twice the detail of an iPhone 13 Pro Max, and comes with proprietary algorithms to help to clear up the inevitable noise – though the example images on the crowdfunding campaign page still have a somewhat grainy quality to them.

The compact shooter weighs in at 14.1 oz (400 g) and measures 2 x 4 in (54 x 106 mm), so won’t take up too much room in your backpack and could even fit in a jacket pocket. Ease of use is offered thanks to an AI assistant that will automatically select things like shutter speed, exposure, aperture and ISO sensitivity.

There’s a 3-inch 2K color display around back for low latency feeds, allowing users to essentially see in the dark as they wander along unlit footpaths, down dark alleyways and through tunnels. Usefully, the screen can be dimmed while watching nocturnal wildlife for minimal disturbance.

Elsewhere, there’s integrated 802.11n Wi-Fi for streaming captured footage to a smartphone (though it also has an SD media slot for up to 512 GB of in-device storage), it comes with a built-in microphone for recording sound and a speaker for playback, the 3,000-mAh internal battery is reported good for up to four hours of per-charge use, an external light can brighten up the immediate area in an emergency, and the camera can be mounted on a tripod to keep things steady.

Kickstarter pledges for the Duovox Mate Pro currently start at US$599, around half the expected retail price, but bump up to $699 when the early bird levels have all been snapped up. If all goes to plan, shipping is estimated to start in October.

Paul Ridden
While Paul is loath to reveal his age, he will admit to cutting his IT teeth on a TRS-80 (although he won’t say which version). An obsessive fascination with computer technology blossomed from hobby into career before hopping over to France for 10 years, where he started work for New Atlas in 2009. Now back in his native Blighty, he serves as Managing Editor in Europe.
–

2 comments
Sign in to post a comment.
Please keep comments to less than 150 words. No abusive material or spam will be published.
–
DasFluchen – 2022 Apr 19 – 05:20 AM
Not sure I’d spend $600 on just a “night shot” camera considering it’s already available on Samsung models and the Pixel 4 (and up phones). I noticed that the Kickstarter page never compares their camera with phones (Hmmmm? Yup camera vs phone camera) that have the best night modes. Great idea, sorta, but a little late!
–
EH – 2022 Apr 19 – 09:59 AM
f/0.9 is an amazingly wide aperture, f/1.2 is about the widest lens commonly available for larger-sensor cameras, only very rare lenses have gone as wide as the magical f/1. At f/1, the focal length of the lens equals the diagonal measurement of the sensor. A 1/1.8″ sensor is ~ 7.11 x 5.33 mm, with a diagonal of 8.89mm, so an f/0.9 lens on that sensor has an aperture of 9.88mm, gathering about as much light as an f/4.3 35mm-format (“full frame”) lens, or an f/2.9 APS-C format lens, with similar depth of field / focus.
–
22 stops of dynamic range is even more amazing, 11 stops is considered quite good, 14 stops was about the best available. Each stop is a factor of 2 more sensitivity, so this camera is about 256 times more sensitive than the prior most sensitive cameras on the market, or 2048 times more sensitive than a good camera.
–
–
Tweet