Subterranean fires are almost impossible to extinguish and add to global emissions from fossil fuels. 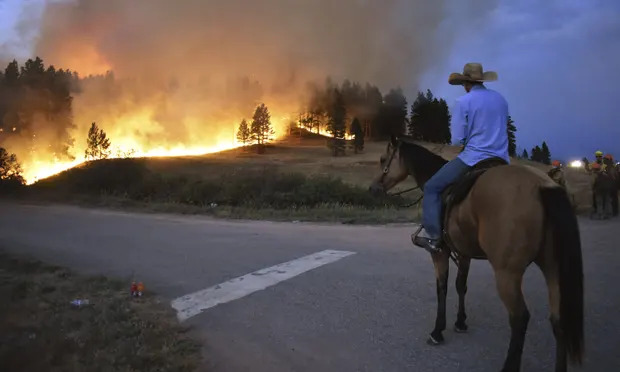 A man watches as a hillside burns in an area of Colorado where abandoned coalmines could be a cause of the wind-driven wildfire. Photograph: Matthew Brown/AP
–

2022 Apr 21
–
The longest-lasting fire known in the world, thought to date back at least 5,500 years, is burning beneath Mount Wingen in New South Wales. The blaze burns in a coal seam that may once have been exposed on the ground and set alight by lightning.

Since then the fire has been smouldering, eating into the coal seam at a rate of about 3ft (1 meter) each year, but because it is about 100ft deep underground the fire is almost impossible to extinguish and will probably continue to burn long into the future.

There are thousands of uncontrolled underground fires in the world, largely coal seams ignited by human-made fires, lightning or spontaneous combustion from chemical reactions.

They are almost impossible to extinguish, threaten many towns, poison the air, soil and groundwater and emit greenhouse gases.

In China there are hundreds of uncontrolled subterranean fires in coal seams, consuming about 18m tons of coal each year. The CO2 from these fires adds about 1% to the world’s total greenhouse gas emissions from fossil fuels. Added to all the other coal-seam fires in the world, this is a largely unreported global catastrophe.