Calls for rules akin to environmental regulations to reduce risk of collisions and preserve night sky. 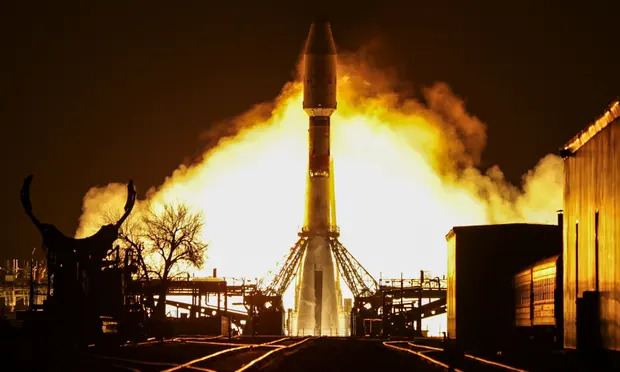 Ian Sample Science editor @iansample
Last modified on 2022 Apr 22
–
The orbital space around Earth must urgently be protected by environmental rules and regulations akin to those that safeguard the planet’s land, seas and air, leading scientists say.
–

An international team of researchers warn that a dramatic rise in the number of satellites is polluting the night sky for astronomers and stargazers, while increasing the risk of objects colliding in space and potentially even striking people or aircraft when they fall back to Earth.

Much of the concern is driven by the surge in mega-constellations, which involve placing tens of thousands of satellites in low Earth orbit to deliver broadband internet and other services.

While companies such as SpaceX and OneWeb are leading the way, others are interested, including Rwanda, which recently filed an application to launch 327,000 satellites in a single project.

“We really need to get our act together. We need to see where have we got regulations that we’re not applying properly, and where do we need new regulations?” said the lead author, Andy Lawrence, a regius professor of astronomy at the University of Edinburgh.

“This is about recognising that the problems we see in orbit are the same as those we see when we worry about the land, the oceans and the atmosphere. We need to knock heads together and say how can we solve this problem.”

Among the proposals are regulations based on a satellite’s space traffic footprint and limits on the carrying capacity of different orbits.

In late 2018, about 2,000 active satellites circled Earth. That number has nearly doubled in the past two years with SpaceX launches alone. All have gone into the most congested low Earth orbit, which reaches from 100-2,000km above Earth. In 2019, the European Space Agency moved its orbiting Aeolus observatory to avoid colliding with a SpaceX satellite, the first time it had swerved around an active satellite. Last year, the Chinese moved their space station twice because of similar concerns.

The scientists argue that while there is robust regulation to ensure satellites are launched safely and transmit signals only within certain frequency bands, there is almost nothing to govern the impact of satellites on the night sky, astronomy, Earth’s atmosphere or the orbital environment.

The researchers describe how light reflecting off satellites can ruin astronomical observations by leaving streaks across images, while their broadcasts can drown out the faint, natural radio signals that astronomers study to understand some of the most exotic objects in the cosmos. But the visible presence of so many satellites also undermines the ability to enjoy the night sky, they argue, an act the International Astronomical Union asserts should be a fundamental right.

There are other concerns too. The risk of falling satellite debris causing damage to property or harm to life today is relatively low. But the danger will notch upwards as more satellites re-enter Earth’s atmosphere at the end of their lives, with potentially lethal consequences.

“The first aircraft strike or ground casualty is only a matter of time,” the researchers warn. Yet another issue is rocket launch emissions which include carbon dioxide, nitric oxide and soot.

“The problem of increasing debris and congestion in Earth orbit poses a real challenge for the governance of human space activity,” said Chris Newman, a professor of space law and policy at the University of Northumbria.

“The breadth of new actors and increased geopolitical tensions mean that a binding international treaty is a long way off. In any event, the law can only take us so far. Countries and companies that are active in space need to demonstrate responsible leadership.”