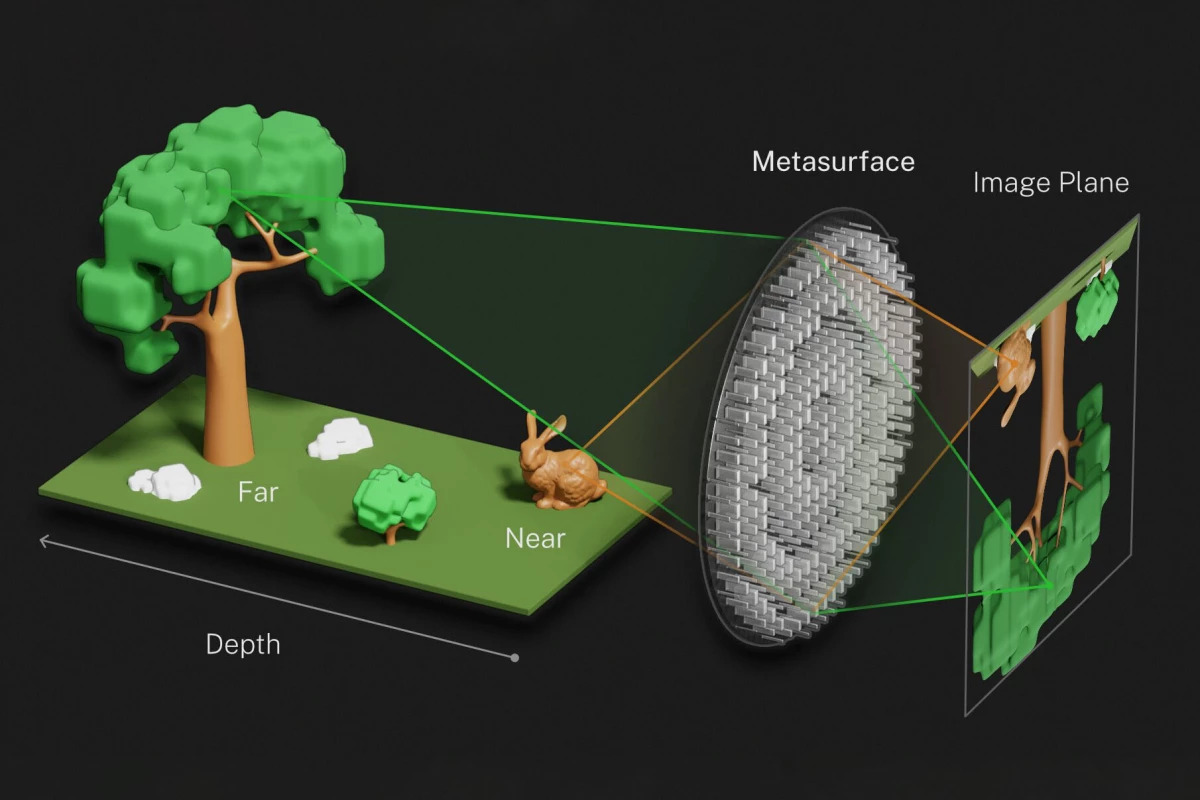 Researchers have created and tested a light field camera with the greatest depth of field ever demonstrated, keeping everything between 3 cm and 1.7 km from the lens in focus.  NIST

–
By Loz Blain
2022 Apr 29
–
In photography, depth of field refers to how much of a three-dimensional space the camera can focus on at once. A shallow depth of field, for example, would keep the subject sharp but blur out much of the foreground and background. Now, researchers at the National Institute of Standards and Technology have taken inspiration from ancient trilobytes to demonstrate a new light field camera with the deepest depth of field ever recorded.

Trilobytes swarmed the oceans about half a billion years ago, distant cousins of today’s horseshoe crabs. Their visual systems were quite complex, including compound eyes, featuring anywhere between tens and thousands of tiny independent units, each with its own cornea, lens and photoreceptor cells.

One trilobyte in particular, Dalmanitina socialis, captured the attention of NIST researchers due to its unique compound eye structure. Fossil record examination indicates that this little guy had double-layer lenses throughout its visual system, unlike anything else in today’s arthropod kingdom, and that the upper layers of these lenses had a bulge in the middle that created a second point of focus. That meant Dalmanitina socialis was able to focus both on the prey right in front of it and the predators that might be approaching from farther off.

When the entire light field is captured in this way, you end up with enough information to reconstruct the scene in terms of color, depth, transparency, specularity, refraction and occlusion, and you can adjust things like focus, depth of field, tilt and perspective shift once the photo’s already taken.

The trouble thus far, according to the NIST team, has been extending depth of field without losing spatial resolution, or losing color information, or closing down the aperture so much that shutter speed becomes an issue. And that’s where these bifocal trilobyte lenses have inspired a breakthrough.

The team designed an array of metalenses, a flat surface of glass studded with a bunch of tiny, rectangular, nano-scale titanium dioxide pillars. Each of these pillars was precisely shaped and oriented to manipulate light in specific ways.

So the researchers positioned those nanopillar metalenses to make sure that some of the light that entered each of them had to go through the long side of the rectangle, and some went through the shorter path. Again, this bent the light by two different amounts and created two different focal points – one focused up close like a macro lens, the other focused way off in the distance like a telephoto lens, so between this and the polarization, the researchers had four images to deal with.

If the math wasn’t crazy enough to that point, the researchers then figured out precise metalens geometries that caused the left circular polarized version of the telephoto-focused light beams to focus at the exact same plane as the right circular polarized version of the macro-focused light beams, enabling them both to be recorded simultaneously, in sharp focus, by a single light field sensor – without losing any spatial resolution.

The team designed and built a 39 x 39 metalens array, with the near focal point set at just 3 cm (1.2 in) and the far point set at 1.7 km (just over a mile). And they designed and coded a reconstruction algorithm using multi-scale convolutional neural networks to correct all the many aberrations introduced by those 1,521 tiny double-purpose metalenses, particularly given how hard it is to keep tight manufacturing tolerances at the nano-scale.

That reconstruction algorithm turned out to be a gem. After a simple calibration process and a training session, it can figure out exactly how and where a particular metalens array strays from perfection – in terms of chromatic aberration, blurriness, and other optical defects, and it can make corrections that can then be easily applied to any image taken.

What’s more, while its two focal points are more than a mile apart, the reconstruction algorithm can sharply reconstruct any item placed in between them, creating a final image that can be set to have the biggest depth of field ever demonstrated, in which objects an inch and a half from the lens are as preternaturally clear and sharp as those way off on the horizon.

Indeed, the reconstruction algorithm does such a great job of correcting for errors that the research team says light field cameras using this technology won’t have to be fabricated with extreme precision. That is to say, the team believes it should be relatively easy to manufacture.

As the study, published in Nature Communications, explains: “This bioinspired nanophotonic light-field camera, together with the computational post-processing, not only can achieve full-color imaging with extreme DoF, but is also able to eliminate the optical aberrations induced by the meta-optics.”

The team believes this technology could be useful in consumer photography, optical microscopy and machine vision, among other areas, but since it’s pretty fresh research at this point we wouldn’t be expecting it to hit the shelves any time soon.

The research is open access in the journal Nature Communications.

2 comments
Sign in to post a comment.
Please keep comments to less than 150 words. No abusive material or spam will be published.
–
Aermaco – 2022 Apr 29 – 10:07 AM
I wonder if it can solve Convergence Accommodation Disparity which vexes AR making people sick due to the near HMD image on top of the far real-world image causing eye-brain focal stress.
–
Bob Flint – 2022 Apr 29 – 10:31 AM
Fantastic surveillance systems just jumped a magnitude of thousands…
–
–