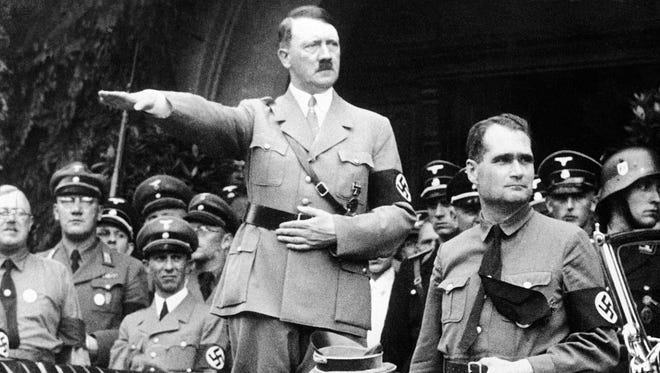 By Ofer Aderet – Haaretz.Com
2022 May 02
–
Russian Foreign Minister Sergey Lavrov caused outrage Sunday when he declared that “Hitler had Jewish blood.” Speaking on Italian television, he said of Ukrainian President Volodymyr Zelenskyy: “So what if Zelenskyy is Jewish? The fact does not negate the Nazi elements in Ukraine. I believe that Hitler also had Jewish blood. It means absolutely nothing. The wise Jewish people said that the most ardent antisemites are usually Jews. Every family has its black sheep, as we say.”
–
There is no historical proof of Hitler’s supposed Jewish heritage, but conspiracy theories that emerged before World War II have occasionally resurfaced this century. These theories generally arise from the fact that Hitler’s father was born out of wedlock and we do not know who his paternal grandfather was.
–
Who really calls the shots in Tehran? LISTEN to Israel’s top Iran expert
–

Munich cafés in the 1920s were rife with rumors that Hitler’s grandfather was Jewish. In the ’30s, these allegations received greater prominence mainly due to newspapers looking for sensational stories following the Nazis’ rise to power in 1933.

At the heart of these rumors was an assumption that the origin of the name “Hitler” was Jewish, and that a Jewish family of that name resided in the Romanian capital of Bucharest.

According to another theory, Hitler’s father was born as a result of a sexual tryst between a member of the Viennese branch of the Rothschild family and a non-Jewish servant woman.

However, the debate about Hitler’s alleged Jewish ancestry really began in earnest after the end of World War II.

One of the protagonists spreading the theory was war criminal Hans Frank, who had headed the General Government in Nazi-occupied Poland. In his memoirs, published after he was executed in October 1946, he claimed that in the late ’30s Hitler showed him a letter from a nephew who threatened to reveal that the führer had Jewish blood.

Frank also claimed that, on Hitler’s orders, he had begun to research the roots of his family and found that his paternal grandmother, Maria Anna Schicklgruber, gave birth to a child while working as a cook at the home of the Frankenbergers – a Jewish family from the Austrian city of Graz.

According to this theory, the child was Adolf Hitler’s father, Alois.

The problem with this testimony is that Hitler’s grandmother died before he was born, so he could not possibly have heard this from her.

Historians claim that the entire story is illogical since the Jews of Graz were expelled from the city in the 15th century and only returned around 1860 – more than two decades after Hitler’s father was born. In other words, at the time when a Jewish man from Graz was supposed to have impregnated Hitler’s grandmother, there were no Jews in Graz.

However, in 2019, Jewish psychologist Dr. Leonard Sax claimed that he was in possession of information that contradicted this and that a small Jewish community resided in Graz even before this time.

So, who was Hitler’s real grandfather and who impregnated his grandmother? This is a question without an answer. His father Alois was born in 1837 as the illegitimate son of Maria Anna Schicklgruber, who was 42 at the time. The father’s name was left empty on his baptism documents.

Five years later, his grandmother married a man by the name of Johann Georg Hiedler. Hitler’s grandmother died in 1847, and it seems she took the answer of who Alois Hitler’s father was with her to her grave.

Alois Hitler was adopted by Johann’s brother, Johann Nepomuk Hiedler. In 1876, when he was 39, he changed the family’s name and adopted the surname Hitler, which was similar to that of his grandmother’s husband, Hiedler. He also had documentation forged so he would be registered as Hiedler’s legal son.

Various claims have been made over the years that Hitler had Jewish blood. Among other things, it was reported that Nazi supporters claimed Hitler was Jewish as an attempt to provide an explanation for their defeat in World War II.

Other reports claimed that Hitler’s persecution of the Jews resulted from feelings of shame about his partial Jewish ancestry. The bottom line, though, is that there is no historical proof for any of this.

$1 for the first month

It is an interesting article but it is entirely irrelevant if Hitler had ‘Jewish blood’. Unfortunately for the racists there is no difference between non-Jewish and Jewish blood and who one is descended from has no bearing on one’s behaviour in life.
We can see that in modern Israel where being Jewish does not stop a proliferation of war criminals from Bibi to Bennett.
But Lavrov is right in one sense. Being Jewish doesn’t stop one being a neo-Nazi. Many of them reside in Israel today. when Rabbi Dov Lior says that a Jewish fingernail is worth more than a thousand non-Jewish lives.
Rabbi Yaacov Perrin, in paying homage to Goldstein, trumped Lior. He told mourners for the mass murderer Baruch Goldstein that even 1 million Arabs “are not worth a Jewish fingernail.”
Today Zelensky is a puppet of Ukraine’s increasingly strong Neo Nazi militias. It is hard to disagree with Lavrov
6

Hitler’s Jewish grandfather on the paternal side is indeed a guess of unknown probability. On the other hand, Hitler would easily pass the genetic test of the Chief Rabbinate of Israel to marry in Israel. The Y-DNA haplogroup to which Hitler belongs is E-M35 (E1b1b1), the same as Einstein’s great-grandfather, Naphtali Hirsch Einstein (1733–1799). This means that Hitler’s unidentified paternal grandfather would also pass the rabbinate’s test for Jewishness. Such theocratic nonsense is only possible in Israel, may God, if he could exist, protect us from it elsewhere.
5

is there historical proof of the Ten Plagues of Egypt, is there historical proof of King David and King Salomon? History is not an exact science. Can we believe DNA proof? The question asked to Lavrov was a silly question. Russia has a good Minister of Foreign Affairs, in contrast to Israel, I mean Lapid. Lapid is a disaster for Israel, on matters of Holocaust, Eastern Europe and the like.
4

The actual president of Ukraine is jewish?? okay ,but its not nazi fascist,
or is??
Putin & Lavrov need at eny price justify is criminal behaviour in the aggression to Ucranian people.
But the evidence said they children,civilians, are not nazis, especially people that was kill in the train station when was trying to run from bombs of Russians,,this time is not justify for that criminals .
3

It only matters to conspiracy theorists. He was the worst that humanity has created, and Jewish people suffered more than any others as a result of his existence.
If Stalin turned out to have an intellectual as a relative, it would not alter his destruction of Russia’s intelligentsia.
2

Paul Solomon
@Paul Solomon: Thank you for pointing this out. bountiful: 1: liberal or generous in bestowing gifts or favors 2 : given or provided abundantly
1

Naftali Bennett’s Government Is Fixing for a Fall

Russia’s Antisemitic Attack on Israel Is Shocking and Deliberate

How Being Jewish Changed Proust’s Life

This Is the Biggest Myth About Israel and the Nakba

When Roe v. Wade Dies, Israel Will Be More Liberal Than U.S. on Abortion

Tel Aviv Is Not Doing Well

‘When It Comes to Charity, Israeli High-tech Billionaires Are Stingy and Arrogant’

AIPAC Endorsed 109 election-Denying Trump Allies, But Not This Fervent pro-Israel Republican. Why?

Russian Women Are Leading the Underground Protest Against Putin’s War

My Aunt Had a Dinner Party, and Then She Took Her Guests to Kill 180 Jews

Tourist Nightmare: Catching COVID Instead of a Flight Out of Israel

Israel Isn’t Turning Al-Aqsa Into a Synagogue. Here’s What It Is Doing

Why Reform Conversions to Judaism Are on the Rise in Israel