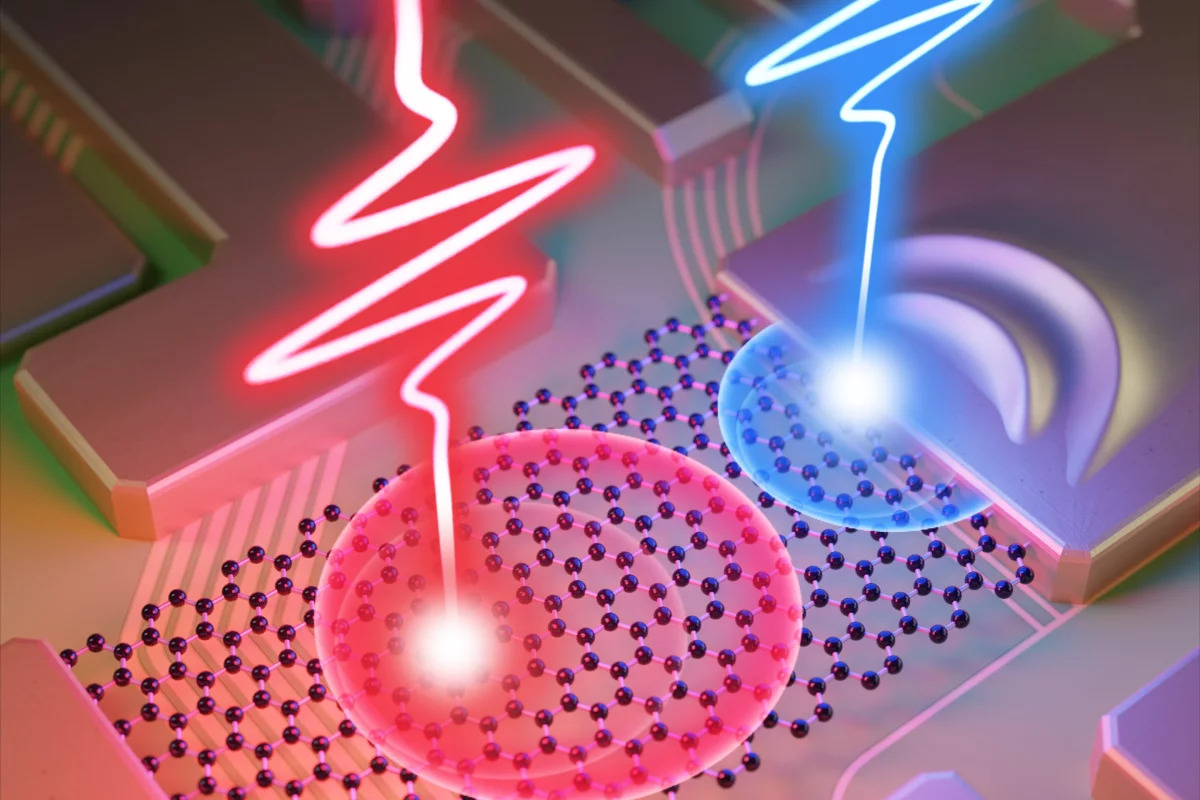 Synchronized pairs of laser pulses drive the fastest logic gates ever made, which could eventually give computers a million-fold speed boost.  University of Rochester illustration / Michael Osadciw
–

2022 May 11
–
Logic gates are the fundamental building blocks of computers, and researchers at the University of Rochester have now developed the fastest ones ever created. By zapping graphene and gold with laser pulses, the new logic gates are a million times faster than those in existing computers, demonstrating the viability of “lightwave electronics.”
–

Logic gates take two inputs, compare them, and then output a signal based on the result. They can, for example, output a 1 if both incoming signals are a 1 or a 0, or if either or neither of them is a 1, among other “rules.” Billions of individual logic gates are crammed into chips to create processors, memory and other electronic components.

Logic gates don’t work instantaneously though – there’s a delay on the order of nanoseconds as they process the inputs. That’s plenty fast enough for modern computers, but there’s always room for improvement. And now the Rochester team’s new logic gates blow them out of the water, processing information in mere femtoseconds, which are a million times shorter than nanoseconds.

To reach these extreme speeds, the team made junctions consisting of a graphene wire connecting two gold electrodes. When the graphene was zapped with synchronized pairs of laser pulses, electrons in the material were excited, sending them zipping off towards one of the electrodes, generating an electrical current.

By adjusting the phase of the laser pulses, the team was able to generate a burst of one of two types of charge carriers, which would either add up or cancel each other out – the former can be considered a 1 output and the latter a 0. The end result is an ultrafast logic gate, marking the first proof of concept of an as-yet theoretical field known as lightwave electronics.

“It will probably be a very long time before this technique can be used in a computer chip, but at least we now know that lightwave electronics is practically possible,” said Tobias Boolakee, lead researcher on the study.

If these kinds of lightwave electronic devices ever do make it to market, they could be millions of times faster than today’s computers. Currently we measure processing speeds in Gigahertz (GHz), but these new logic gates function on the scale of Petahertz (PHz). Previous studies have set that as the absolute quantum limit of how fast light-based computer systems could possibly get.