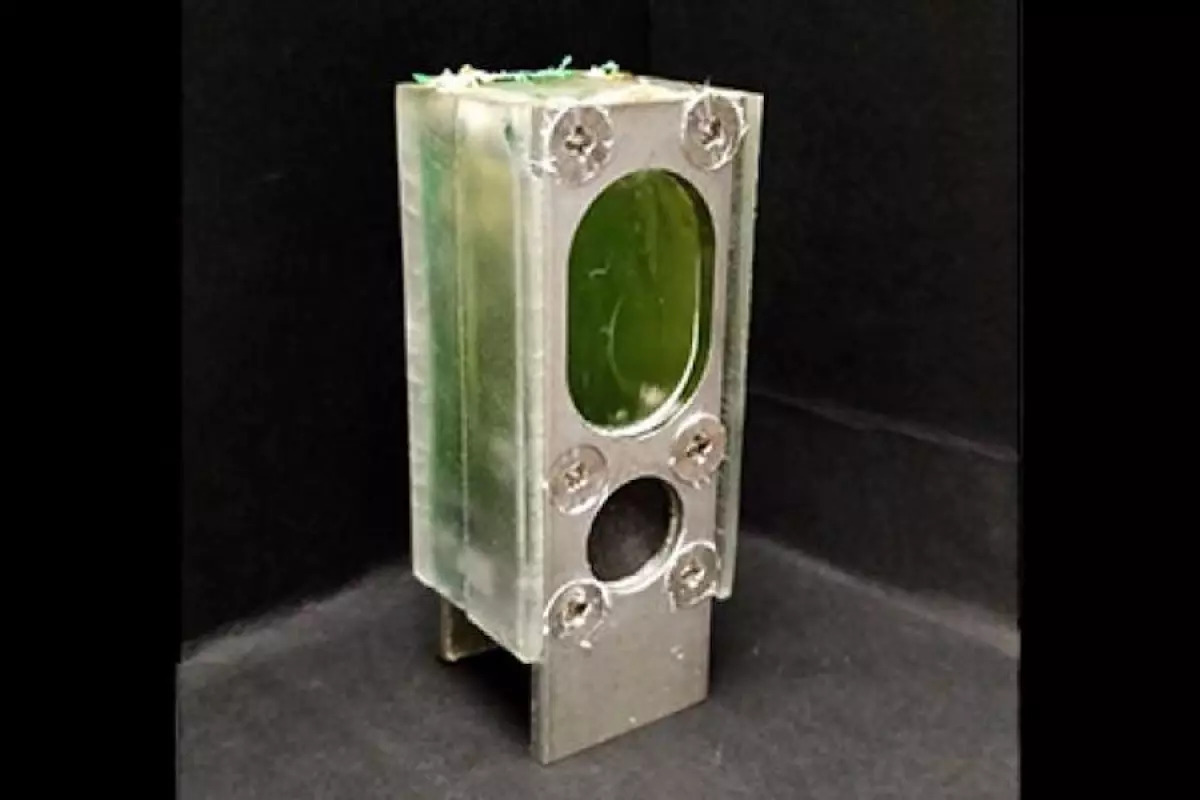 A new algae-based energy harvester, about the size of a AA battery.  Paolo Bombelli
–

As the number of electronic devices grows, we’re going to have to get creative with our energy sources. Cambridge researchers have now demonstrated how an algae energy harvester can use sunlight to power a microprocessor for over a year without any human help.

Algae features heavily in green technologies of the future, in many different ways. It shows promise in producing hydrogen, purifying wastewater, removing carbon dioxide from the atmosphere, forming the basis of biofuels, and generating electricity through photosynthesis.

It’s that last point that the Cambridge team has focused on. Algae is an efficient natural solar cell, converting sunlight into chemical energy and water and carbon dioxide into organic molecules. Electrons are produced in the process, and these can be collected and used to power electronic devices.

The new algae energy harvester placed a species of blue-green algae in a small container with some water, with the entire unit being about as big as a AA battery. Electrons are collected by an aluminum electrode and shuttled out to run an Arm Cortex M0+, a low-power microprocessor that’s commonly used in Internet of Things (IoT) devices.

The researchers left the system running in a “domestic” environment in “semi-outdoor” conditions (which we take to mean on someone’s porch), where it reliably produced electricity for the microprocessor long-term. The paper only describes the first six months, but the team says it’s still chugging away now after being left alone for a full year.

“We were impressed by how consistently the system worked over a long period of time – we thought it might stop after a few weeks but it just kept going,” said Dr Paolo Bombelli, first author of the study.

The team says that the device was even able to continue producing electricity for a little while in darkness, which suggests the algae can store some of its “food” to process later.

The algae-based energy harvester doesn’t generate a huge amount of power, but it’s enough for Internet of Things devices, which are increasing in number. Made of inexpensive and common components, and lasting much longer than traditional lithium batteries, these devices could make for a more environmentally friendly power source, particularly in remote areas.

The research was published in the journal Energy & Environmental Science.

Michael Irving
Michael has always been fascinated by space, technology, dinosaurs, and the weirder mysteries of the universe. With a Bachelor of Arts in Professional Writing and several years experience under his belt, he joined New Atlas as a staff writer in 2016.
–
–
3 comments
Sign in to post a comment.
Please keep comments to less than 150 words. No abusive material or spam will be published.
Captain Danger – 2022 May 13 – 07:20 AM
What is the advantage over just using a solar cell and maybe a capacitor to store exess energy for use during the night?
I am not sure how much power the the processor takes but I have had solar power calculators that function even in somewhat poorly lit shops.
Eggster – 2022 May 13 – 10:27 AM

@Captain Danger Algae can be used to process and recycle waste water and produce biofuels. This is just another benefit.

How long would a alkaline AA power the same processor for?
–