By Deepak Ray, Senior Scientist, University of Minnesota
Published: 2022 May 13
–

Rising competition for many of the world’s important crops is sending increasing amounts toward uses other than directly feeding people. These competing uses include making biofuels; converting crops into processing ingredients, such as livestock meal, hydrogenated oils and starches; and selling them on global markets to countries that can afford to pay for them.

In a newly published study, my co-authors and I estimate that in 2030, only 29% of the global harvests of 10 major crops may be directly consumed as food in the countries where they were produced, down from about 51% in the 1960s. We also project that, because of this trend, the world is unlikely to achieve a top sustainable development goal: ending hunger by 2030.

Another 16% of harvests of these crops in 2030 will be used as feed for livestock, along with significant portions of the crops that go to processing. This ultimately produces eggs, meat and milk – products that typically are eaten by middle- and upper-income people, rather than those who are undernourished. Diets in poor countries rely on staple foods like rice, corn, bread and vegetable oils.

The crops that we studied – barley, cassava, maize (corn), oil palm, rapeseed (canola), rice, sorghum, soybean, sugar cane and wheat – together account for more than 80% of all calories from harvested crops. Our study shows that calorie production in these crops increased by more than 200% between the 1960s and the 2010s.

Today, however, harvests of crops for processing, exports and industrial uses are booming. By 2030, we estimate that processing, export and industrial-use crops will likely account for 50% of harvested calories worldwide. When we add the calories locked in crops used as animal feed, we calculate that by 2030, roughly 70% of all harvested calories of these top 10 crops will go to uses other than directly feeding hungry people. 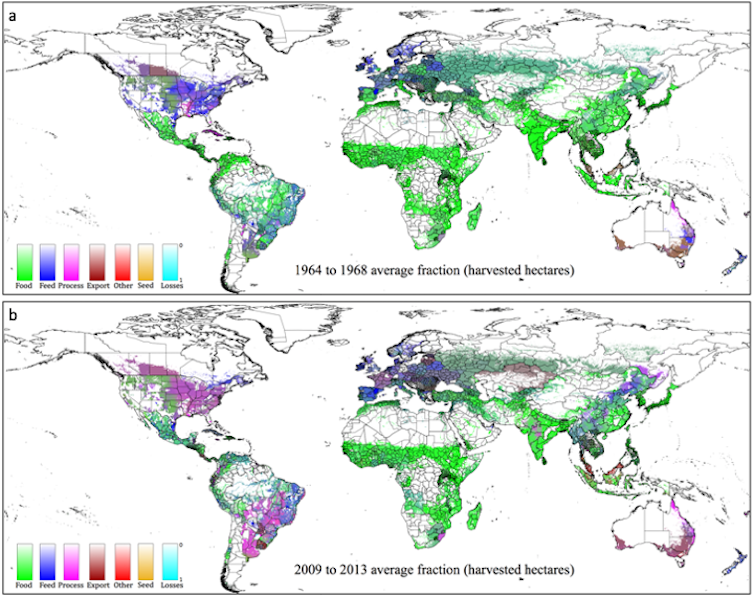 These two maps show how the use of 10 major food crops changed from the 1960s to the 2010s. In areas that change from blue and green to red and purple, crops increasingly are used for food processing, export and industrial uses (labeled ‘other’). One hectare equals about 2.5 acres. Ray et al., 2022, CC BY-ND
–

Serving the affluent, not the poor

These profound changes show how and where agriculture and agribusiness are responding to the growth of the global middle class. As incomes rise, people demand more animal products and convenient processed foods. They also use more industrial products that contain plant-based ingredients, such as biofuels, bioplastics and pharmaceuticals.

Many crops grown for export, processing and industrial uses are specially bred varieties of the 10 major crops that we analyzed. For example, only about 1% of corn grown is the U.S. is sweet corn, the type that people eat fresh, frozen or canned. The rest is mostly field corn, which is used to make biofuels, animal feed and food additives.

The amount of protein per unit of land from processing crops is twice that of food crops, and is increasing at 1.8 times the rate of food crops. Crops harvested for direct food consumption have had the lowest yields across all metrics of measurement and lowest rates of improvement.

What does this mean for reducing hunger? We estimate that by 2030, the world will be harvesting enough calories to feed its projected population – but it won’t be using most of those crops for direct food consumption.

According to our analysis, 48 countries will not produce enough calories within their borders to feed their populations. Most of these countries are in sub-Saharan Africa, but they also include Asian nations such as Afghanistan and Pakistan and Caribbean countries such as Haiti.

is growing at an alarming rate

was already among the 10 worst food crises globally, & the # of ppl facing acute hunger is expected to double this year Read the Global Report on Food Crisis for more 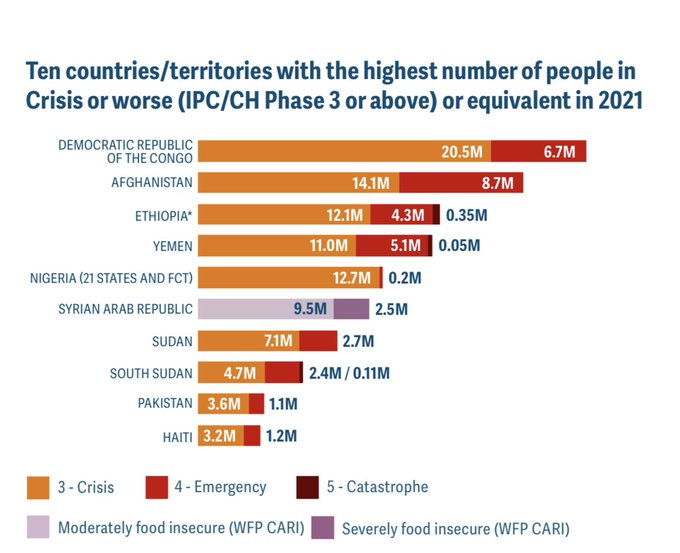 –
Scientists and agricultural experts have worked to increase the productivity of food crops in countries where many people are undernourished, but the gains so far have not been enough. There may be ways to persuade wealthier nations to raise more food crops and divert that extra output to undernourished countries, but this would be a short-term solution.

My colleagues and I believe the broader goal should be raising more crops in food-insecure countries that are used directly as food, and increasing their yields. Ending poverty, the U.N.‘s top sustainable development goal, will also enable countries that can’t produce enough food to meet their domestic needs to import it from other suppliers. Without more focus on the needs of the world’s undernourished people, eliminating hunger will remain a distant goal.

The University of Minnesota’s Institute on the Environment supported the publication of this work.

Write an article and join a growing community of more than 146,000 academics and researchers from 4,368 institutions.