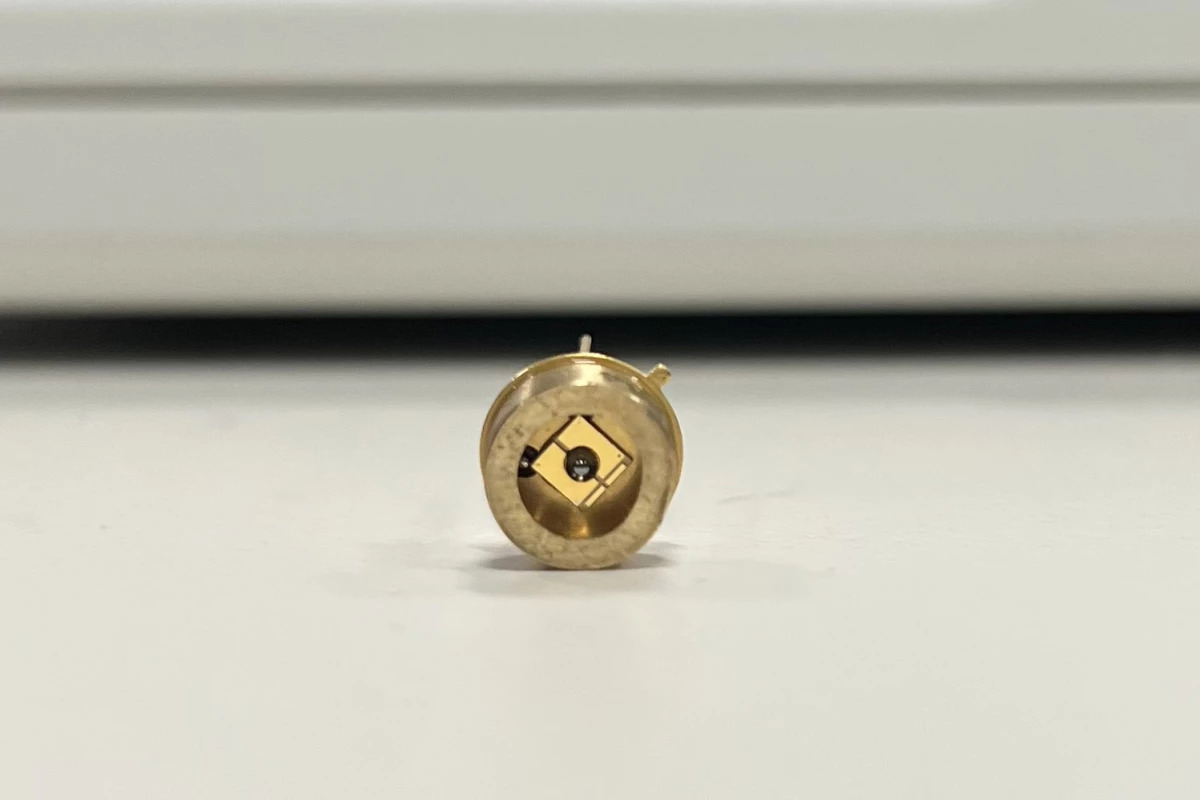 A UNSW team has measured the first power generation from a thermoradiative diode, which could be used to harvest re-emitted solar energy at night.  UNSW

2022 May 18
–
In a world first, a team at the University of New South Wales (UNSW) has demonstrated measurable power generation from “the inverse of a conventional solar cell.” It could eventually produce around one tenth as much power as a solar panel – but at night.

Solar panels, as we all know, absorb energy from sunlight and convert it into electricity. To grossly oversimplify, they use two differently treated silicon semiconductor layers in what’s known as a P-N junction. The N layer is doped with extra electron “donor” impurities, the P layer is doped with “acceptor” impurities – spaces for the electrons to fit into – and in the middle there’s a “depletion region,” where those electrons and electron-accepting holes more or less eliminate one another, creating a barrier that stops all the N side’s electrons from diffusing straight through to the P side.

When sunlight shines on the cell, thermal energy in the incoming photons is absorbed in the silicon, and if an electron in the depletion region receives enough energy to jump the bandgap between the two sides, it can pop out of its hole and be accelerated across to the N side, increasing the voltage potential between the two sides. Connecting the two sides together in an external circuit, you can run the electrons back around to the P side and do electrical work.

All of which is to say, it’s the thermal energy in photons coming down from the sky that kicks the process off. But this isn’t just a one-way process. As our planet spins around, solar radiation heats up the Earth during the daytime, but the Earth releases that energy again as infrared light into the cool of night. And it’s this flow of infrared photons into colder air that one group of UNSW researchers is working on harnessing.

The research team’s device is called a thermoradiative diode, and it basically works like the inverse of a solar cell, accepting thermal energy radiated upward from the Earth (or any other heat source) into a colder area, and turning the flow of energy across that temperature differential into electrical potential. It’s built using some of the same materials used in infrared night vision goggles.

“It is truly the inverse of a conventional solar cell in its functionality,” Dr. Michael Nielsen, a lecturer and researcher at UNSW’s School of Photovoltaic and Renewable Energy Engineering, explained to us in an email. “But it still uses a semiconductor P-N junction as the core of the device (just run in reverse).

“The idea that thermodynamically we can produce power via the emission of light rather than absorption can be a stumbling block for many, but much like a solar cell, what we ultimately have here is a heat engine, with the difference being swapping the power converter from the cold side (solar cell being on Earth absorbing photons from the Sun) to the hot side (thermoradiative diode being on Earth emitting photons into the coldness of space).”

“Wherever there is a flow of energy, we can convert it between different forms,” associate professor Ned Ekins-Daukes, Nielsen’s co-author on the research, elaborated.

While the concept of “emissive energy harvesters” was proposed theoretically back in 2014, this new paper, published in the journal ACS Photonics, marks the first time a thermoradiative diode has been demonstrated actually producing a measurable amount of power.

It should be noted, it’s not a lot of power at this stage. With a temperature differential of just 12.5 °C, the team managed to measure a peak thermoradiative electrical power density of 2.26 mW per square meter, with an estimated radiative efficiency of 1.8 percent.

“Right now, the demonstration we have with the thermoradiative diode is relatively very low power,” said A/Prof Ekins-Daukes. “One of the challenges was actually detecting it. But the theory says it is possible for this technology to ultimately produce about 1/10th of the power of a solar cell.”

Indeed, it’s possible to use this technology to generate power from more or less anything that glows when you look at it through a thermal camera. That could include harvesting energy from industrial waste heat, or potentially even creating bionic devices that run off the body’s own heat.

The team says this is very much an early step, with a long way to go in terms of optimization and development. It hopes the commercial world will step in to fund and drive the next stages. “I think for this to be breakthrough technology, we shouldn’t underestimate the need for industries to step in, and really drive it.,” said Ekins-Daukes. “I’d say there’s still about a decade of university research work to be done here. And then it needs industry to pick it up. If industry can see this as a valuable technology for them, then progress can be extremely fast. The miracle of solar power today owes itself to world-renowned researchers like Scientia Professor Martin Green at UNSW, but also to industrialists who have raised large sums of money to scale up manufacturing.”

The research is published in the journal ACS Photonics.

3 comments
Sign in to post a comment.
Please keep comments to less than 150 words. No abusive material or spam will be published.
Bob Flint – 2022 May 18 – 09:40 AM
So you could either aim it upward and pick off stray photons, & maybe add a reflective concave surface aimed down towards earth focusing on the center point of the module, & collect a lot more. How was the test set-up?
TechGazer – 2022 May 18 – 12:53 PM
No, Bob Flint, it’s not working by collecting photons radiated from warm surfaces, it’s creating energy by radiating photons from the warm diode to a cold sink (the night sky).
Panels of these diodes would face the same problem as their daytime rivals: cloudy skies would result in lower power generation.
James Barbour – 2022 May 18 – 02:49 PM

How is this different than the thermo electric generators that have been in commercial use for 80 years? Heat on one side, cold on the other and electricity flows.
–