Earth’s magnetic field is like a huge bubble protecting us from the onslaught of cosmic radiation and charged particles carried by powerful winds that escape the Sun’s gravitational pull and stream across the Solar System. Without our magnetic field, life as we know it would not exist.

Understanding exactly how and where our magnetic field is generated, why it fluctuates constantly, how it interacts with solar wind and, indeed, why it is currently weakening, is not only of academic interest but also of benefit to society. For example, solar storms can damage communication networks and navigation systems and satellites, so while we can’t do anything about changes in the magnetic field, understanding this invisible force helps to be prepared.

Most of the field is generated by an ocean of superheated, swirling liquid iron that makes up Earth’s outer core 3000 km under our feet. Acting like the spinning conductor in a bicycle dynamo, it generates electrical currents and the continuously changing electromagnetic field.

ESA’s Swarm mission, which comprises three identical satellites, measures these magnetic signals that stem from Earth’s core, as well as other signals that come from the crust, oceans, ionosphere and magnetosphere.

Since the trio of Swarm satellites were launched in 2013, scientists have been analyzing their data to gain new insight into many of Earth’s natural processes, from space weather to the physics and dynamics of Earth’s stormy heart.

Measuring our magnetic field from space is the only real way of probing deep down to Earth’s core. Seismology and mineral physics provide information about the material properties of the core, but they do not shed any light on the dynamo-generating motion of the liquid outer core.

But now, using data from the Swarm mission, scientists have unearthed a hidden secret.

A paper, published in the journal Proceedings of the National Academy of Sciences, describes how a team of scientists detected a new type of magnetic wave that sweeps across the ‘surface’ of Earth’s outer core – so where the core meets the mantle. This mysterious wave oscillates every seven years and propagates westward at up to 1500 kilometers a year. 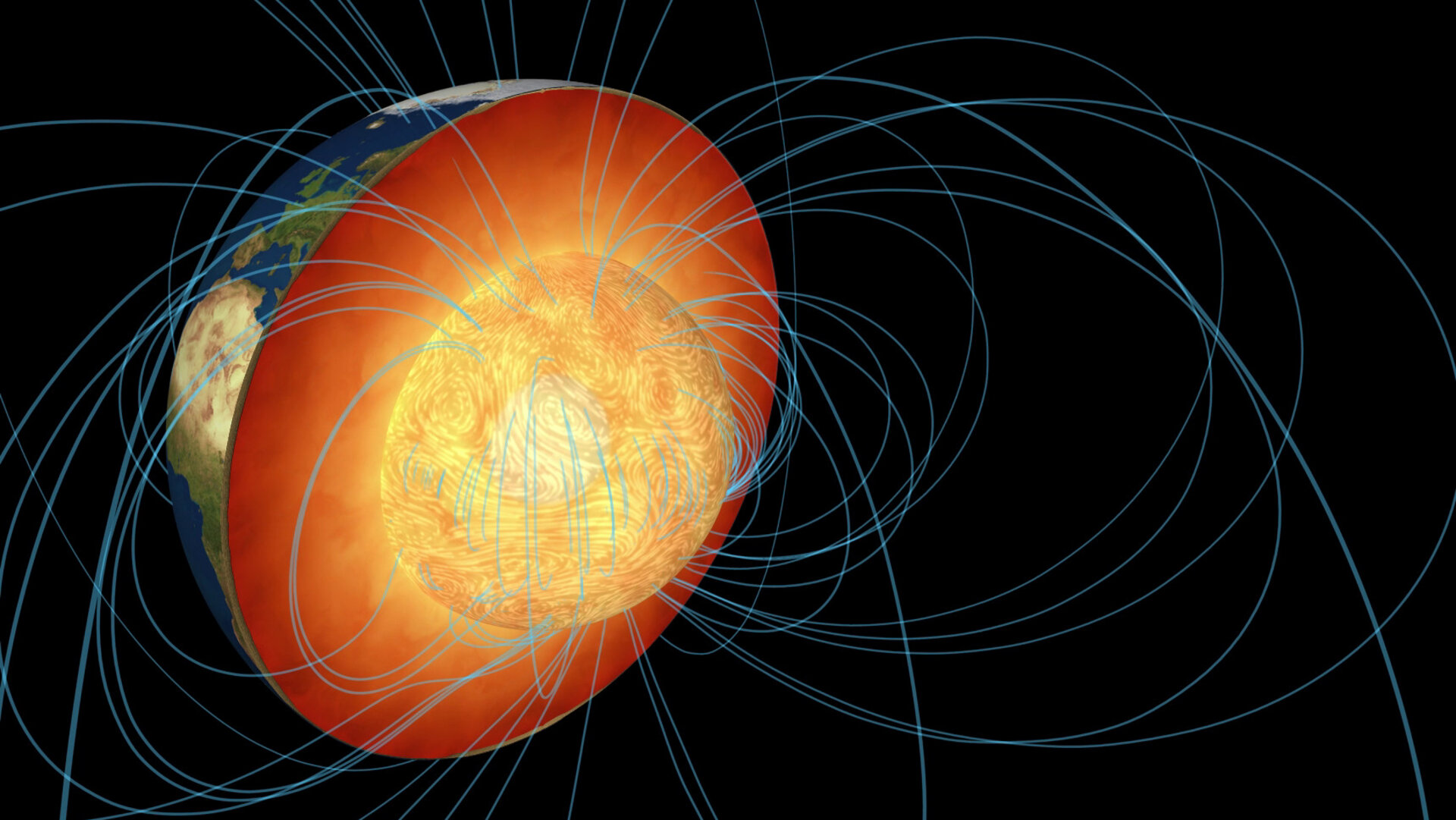 Nicolas Gillet, from the Université Grenoble Alpes and lead author of the paper, said, “Geophysicists have long theorized over the existence of such waves, but they were thought to take place over much longer time scales than our research has shown.

“Measurements of the magnetic field from instruments based on the surface of Earth suggested that there was some kind of wave action, but we needed the global coverage offered by measurements from space to reveal what is actually going on.

“We combined satellite measurements from Swarm, and also from the earlier German Champ mission and Danish Ørsted mission, with a computer model of the geodynamo to explain what the ground-based data had thrown up – and this led to our discovery.”

Owing to Earth’s rotation, these waves align in columns along the axis of rotation. The motion and magnetic field changes associated with these waves are strongest near the equatorial region of the core.

While the research exhibits magneto-Coriolis waves near a seven-year period, the question of the existence of such waves that would oscillate at different periods, however, remains.

Dr Gillet added, “Magnetic waves are likely to be triggered by disturbances deep within the Earth’s fluid core, possibly related to buoyancy plumes. Each wave is specified by its period and typical length-scale, and the period depends on characteristics of the forces at play. For magneto-Coriolis waves, the period is indicative of the intensity of the magnetic field within the core.

“Our research suggests that other such waves are likely to exist, probably with longer periods – but their discovery relies on more research.”

ESA’s Swarm mission scientist, Ilias Daras, noted, “This current research is certainly going to improve the scientific model of the magnetic field within Earth’s outer core. It may also give us new insight into the electrical conductivity of the lowermost part of the mantle and also of Earth’s thermal history.”

Supported by ESA’s Science for Society program, this research was presented at ESA’s Living Planet Symposium taking place this week in Bonn, Germany. Those attending are hearing about the latest scientific findings on our planet and how observing Earth from space supports environmental research and action to combat the climate crisis. They are also hearing about novel space technologies and about the new opportunities emerging in the rapidly changing sector of Earth observation. Selected sessions are being live-streamed, see ESA’s Web TV channels.

–
–
(For the source of this, and many other equally intriguing a and important articles, please visit: https://www.esa.int/Applications/Observing_the_Earth/FutureEO/Swarm/Swarm_unveils_magnetic_waves_deep_down/)
Tweet