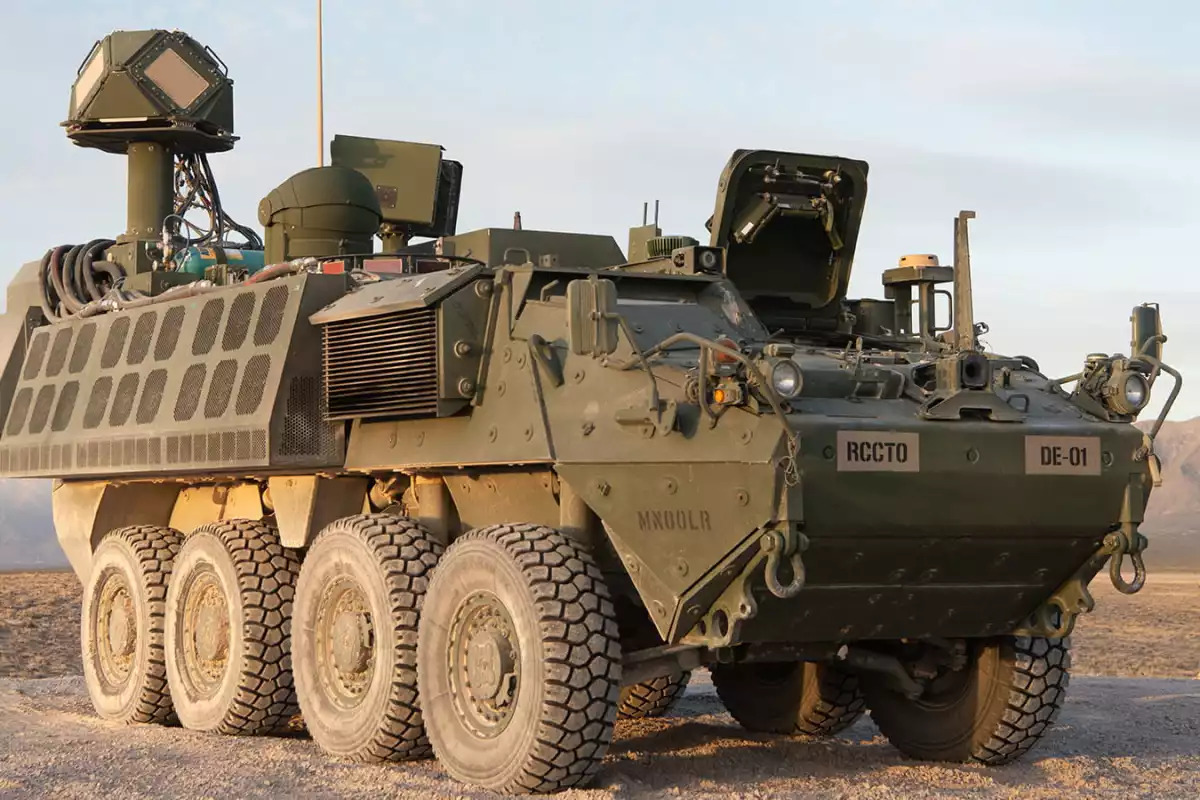 –
By David Szondy
2022 May 24
–
Using a 50-kW high-energy laser weapon, a US Army Stryker combat vehicle acquired, tracked, targeted, and defeated multiple 60-mm mortar rounds and other threats during four weeks of live-fire exercises at the White Sands Missile Range in New Mexico.

One of the enduring trends of military technology since the first club was invented is the arms race between offensive weapons and the armor to defend against them. With the development of dynamic defenses like anti-missile systems, things have become increasingly complex as military assets sit behind complicated defensive webs designed to counter many weapons at a distance.

A potential major component of these defenses is the laser weapon, which has a practically unlimited supply of rounds costing about a dollar a round outside of equipment price and can engage targets at long range at literally the speed of light.

The recent tests were carried out by a private industry team led by Raytheon Intelligence & Space, which supplied the laser weapon module, and Kord Technologies, which handled the integration with the Stryker combat vehicle. Part of the US Army’s Directed Energy Maneuver-Short Range Air Defense (DE M-SHORAD), the high-energy laser is combined with a beam director, an EO/IR target acquisition and tracking system, and a Ku720 multi-mission radar for 360-degree coverage of an area.

During the exercises, the solid-state laser took on mortar rounds as well as a mixture of small, medium, and large drones. The team is scheduled to deliver four of the DE M-SHORAD units to Army Brigade Combat Teams later this year.

“Soldiers in the field face increasingly complex threats, and our combat-proven sensors, software, and lasers are ready to give them a new level of protection,” said Annabel Flores, president of Electronic Warfare Systems for Raytheon Intelligence & Space. “The Army gave us our toughest challenge yet – countering rockets, artillery and mortars – and we took an essential step on the path to providing the maneuverable, short range air defense Soldiers need.”

Raytheon says its Texas-built high energy laser weapon systems can be used as standalone systems or installed on a variety of platforms to provide 360-degree coverage for not only military assets, but also high-value civilian assets, such as airports or stadiums.

–
Military US Army Laser weapon Raytheon
–
–
David Szondy
David Szondy is a freelance journalist, playwright, and general scribbler based in Seattle, Washington. A retired field archaeologist and university lecturer, he has a background in the history of science, technology, and medicine with a particular emphasis on aerospace, military, and cybernetic subjects. In addition, he is the author of a number of websites, four award-winning plays, a novel that has thankfully vanished from history, reviews, scholarly works ranging from industrial archaeology to law, and has worked as a feature writer for several international magazines. He has been a New Atlas contributor since 2011.
–