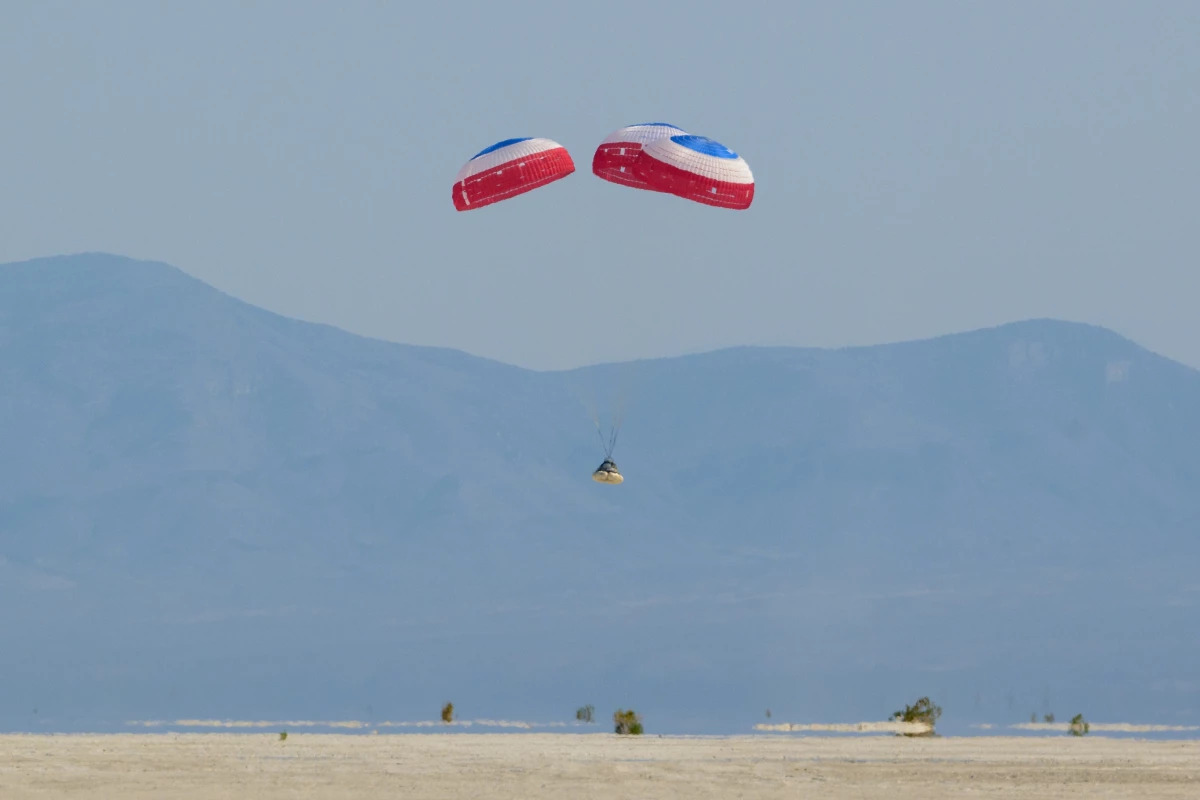 –
By David Szondy
2022 May 25
–
Boeing’s Starliner passenger spacecraft has successfully returned to Earth. At 4:49 pm MDT, the uncrewed capsule landed at the US Army’s White Sands Missile Range in New Mexico at the end of a six-day mission to the International Space Station (ISS).

Today’s parachute landing marks third time lucky for the Starliner program, which has been marked by delays, equipment malfunctions, and software glitches that have resulted in an emergency landing and an aborted launch. Because these problems could have affected the craft at every step of its test flight, three was an air of suspense right up to touchdown in the New Mexico desert.

Part of certification before it can begin ferrying crews from American soil to the ISS, Orbital Flight Test-2 (OFT-2) lifted off from Cape Canaveral Space Force Station in Florida atop a United Launch Alliance (ULA) Atlas V rocket at 6:55 pm EDT on 2022 May 19. A day later, the CST-100 Starliner autonomously rendezvoused and docked with the space lab and the station crew opened the hatch.

According to Boeing, the Starliner flight not only demonstrated the ability of the company to carry out a complete mission from launch to recovery, but also tested the spacecraft’s avionics system, docking system, communications and telemetry systems, environmental control systems, solar arrays, electrical power systems, and propulsion systems. The capsule autonomously maintained its position before docking and responded to commands from the station. In addition, it showed the ability to charge its batteries using its solar panels, transfer digital files, and establish joint ventilation with the ISS.

The next flight is scheduled to carry a crew.

“We have had an excellent flight test of a complex system that we expected to learn from along the way and we have,” said Mark Nappi, vice president and program manager, Boeing Commercial Crew Program. “Thank you to the NASA and Boeing teammates who have put so much of themselves into Starliner.

“With the completion of OFT-2, we will incorporate lessons learned and continue working to prepare for the crewed flight test and NASA certification.”

The video below replays the live coverage of Starliner’s return.

–
Space Boeing NASA International Space Station CST-100
–
–
David Szondy
David Szondy is a freelance journalist, playwright, and general scribbler based in Seattle, Washington. A retired field archaeologist and university lecturer, he has a background in the history of science, technology, and medicine with a particular emphasis on aerospace, military, and cybernetic subjects. In addition, he is the author of a number of websites, four award-winning plays, a novel that has thankfully vanished from history, reviews, scholarly works ranging from industrial archaeology to law, and has worked as a feature writer for several international magazines. He has been a New Atlas contributor since 2011.
–