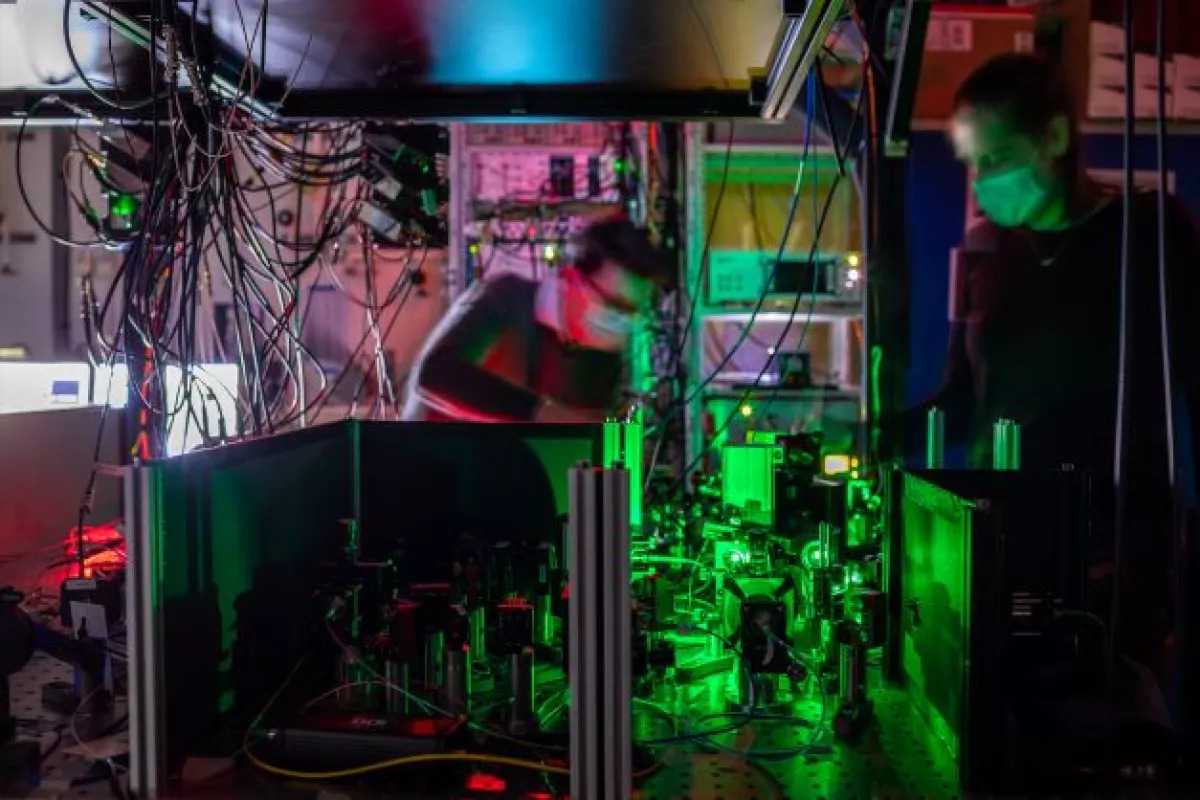 Researchers at the QuTech collaboration have managed to teleport quantum information between two non-adjacent nodes for the first time.  Marieke de Lorijn for QuTech

–
By Michael Irving
2022 May 26
–
Scientists in the Netherlands have made a major step towards quantum computer networks by teleporting quantum information between two nodes that didn’t have a direct link to each other. The breakthrough heralds a faster and more secure communication system.
–
As the name suggests, quantum computers tap into several principles of quantum mechanics to perform calculations that are beyond the reach of traditional computers. And just like our current internet, these quantum computers will need to be linked together to achieve their full potential. However, sending information between them is tricky, because the quantum nature of that data makes it susceptible to loss or interference from the environment.
–

Instead, that information can be essentially “teleported” between nodes, thanks to a phenomenon known as quantum entanglement. Two particles can become so entwined with each other that it becomes impossible to describe one without the other, and any changes made to one will instantly affect the other, no matter how far apart they are. It’s a concept that famously unsettled Einstein himself, but it has been repeatedly confirmed in experimentation.

In the context of a quantum computer network, quantum bits (or qubits) of information can be teleported to a node by making changes to its entangled partner, usually by performing what’s called a Bell-state measurement (BSM). This has been demonstrated before between two adjacent nodes, but for the new study, researchers at the QuTech collaboration were able to teleport information between two non-neighboring nodes.

Doing so requires the use of a third node acting as a kind of mediator – for simplicity’s sake, the team has named the three nodes Alice, Bob and Charlie, each of which contains a diamond-based qubit. To create the network, the team first creates entangled states between Alice and Bob, and between Bob and Charlie. Then, by performing a BSM in Bob’s node, the states of Alice and Charlie become entangled as well, even though they aren’t adjacent in the network.

To teleport information to Alice, Charlie starts by creating a “message” by writing data to a qubit in his node’s memory. This could be a 1, or a 0, or in spooky quantum fashion, a strange intermediate state. Then, he performs a BSM on this memory qubit and the qubit that’s entangled with Alice’s. And just like that, Alice’s qubit instantly changes to reflect Charlie’s message.

However, if Alice wants to read the message, she needs to decrypt it first, and Charlie has the key. The outcome of the BSM he performed on his qubit explains what operation Alice needs to perform on hers to decipher the teleported information.

The QuTech researchers successfully pulled off this feat consistently through many experiments, with a fidelity of around 71 percent. This was achieved through several breakthroughs the team made to protect the quantum information in the network. For one, the entanglement between Alice and Bob had to be stored in a quantum memory qubit while Bob was forming a link with Charlie. Other optimization techniques reduced the noise in the system.

In achieving this kind of non-direct quantum teleportation, the researchers say they’ve created a fundamental building block of a practical quantum network. But of course, there’s still a long way to go. A key next step is to increase the number of memory qubits in the system to boost the kinds of operations it can run.

The team also plans to investigate how to teleport information already stored in quantum memory, rather than having to create that message after the link has been established. This will enable quantum teleportation to be carried out on request, which is crucial if this technology is every going to become a useful reality.

The research was published in the journal Nature. The experiments are explained in more detail in the video below.

From Alice to Charlie – the next step for the quantum internet

Sounds like also a blueprint for super luminal communications. Or at least much faster link over much greater distances

I’m pretty smart. This goes beyond my capability of understanding. Like really understanding. I get it on a high level, but the physics is just too deep for my little brain…
–