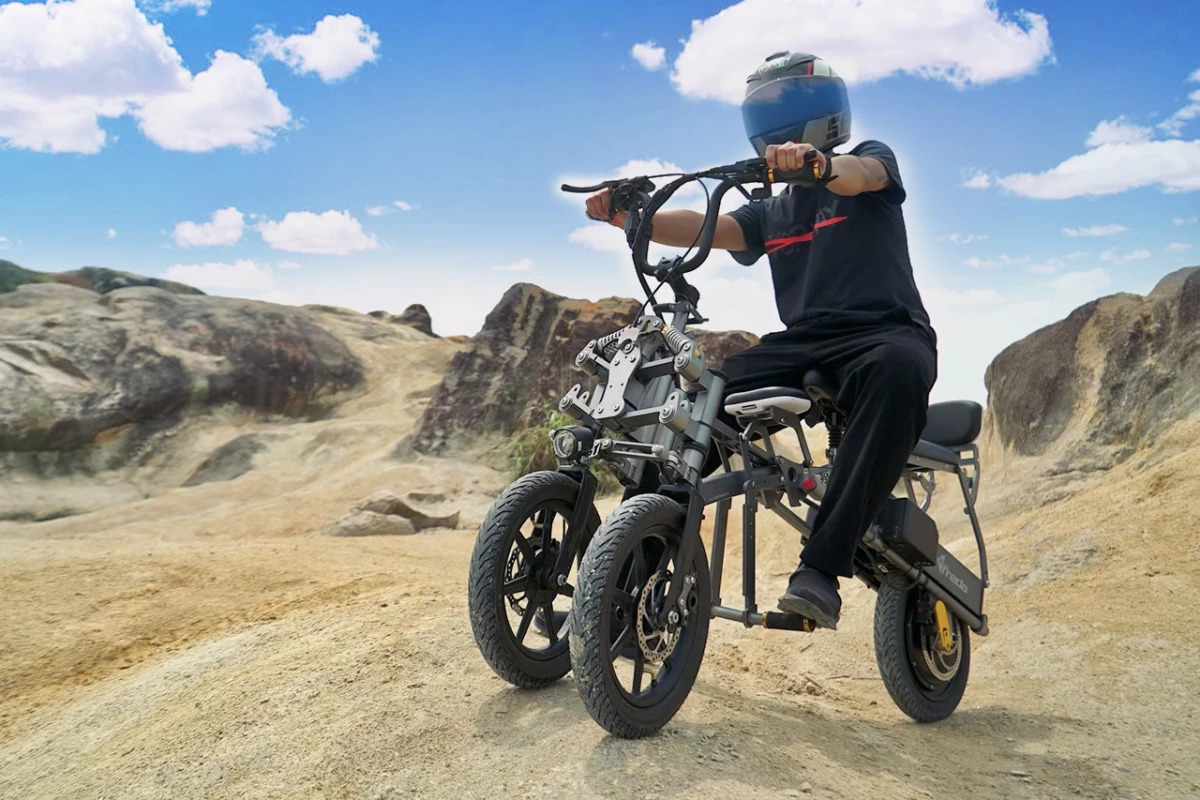 The Afreda S6’s front linkage allows the two front wheels to tilt into corners, and to independently move straight up and down by up to 11 inches.  Afreda
–

By Ben Coxworth
2022 May 18
–
Although electric scooters are becoming extremely popular, the things are still just a little too unstable for some people. The Afreda S6 was designed with such folks in mind, as it features two front wheels that independently tilt into turns – plus it can be folded up when not in use.
–

First of all, if the scooter looks a bit familiar, that may be because the previous model was manufactured for various other companies, which sold it under their own names. Now, the original designer/manufacturer has registered its own Afreda brand name, and is raising distribution funds for the new S6 model via an Indiegogo campaign.

The vehicle features three aluminum 14-inch wheels, the rear of which incorporates a brushless hub motor. That motor takes the form of a 250-watt model for European Union countries, and a 500-watt version for North America – they deliver top speeds of 35 and 40 km/h (22 and 25 mph), respectively.

The two front wheels incorporate a spring-loaded linkage mechanism which allows each of them to tilt up to 40 degrees (relative to the frame) when taking corners, reducing the chances of tipping over. That linkage also acts as a sort of front suspension, as each wheel can independently move straight up and down by as much as 11 inches (279 mm) when traversing uneven terrain.

Additionally, when the S6 is parked – or when riders are first getting used to it – the linkage can be locked off, keeping the front wheels from tilting.

The base Lite model of the scooter is powered by a 48V/7.8-Ah lithium battery, one 4-hour charge of which is claimed to be good for a range of 30 km (19 miles). That figure is doubled for the extended-range Pro model, that has two batteries.

And yes, the anodized 6061 aluminum alloy frame can be folded in a claimed one second. The scooter can then be rolled along like a suitcase, for transit or storage.

Some of the S6’s other features include hydraulic disc brakes; an LCD handlebar control unit; a padded rear seat/rack for a second passenger or cargo; plus a mini padded seat in front of the main saddle, for a small child – the two extra seats are only offered on the Pro.

You can see the Afreda S6 in tilting and folding action, in the video below.