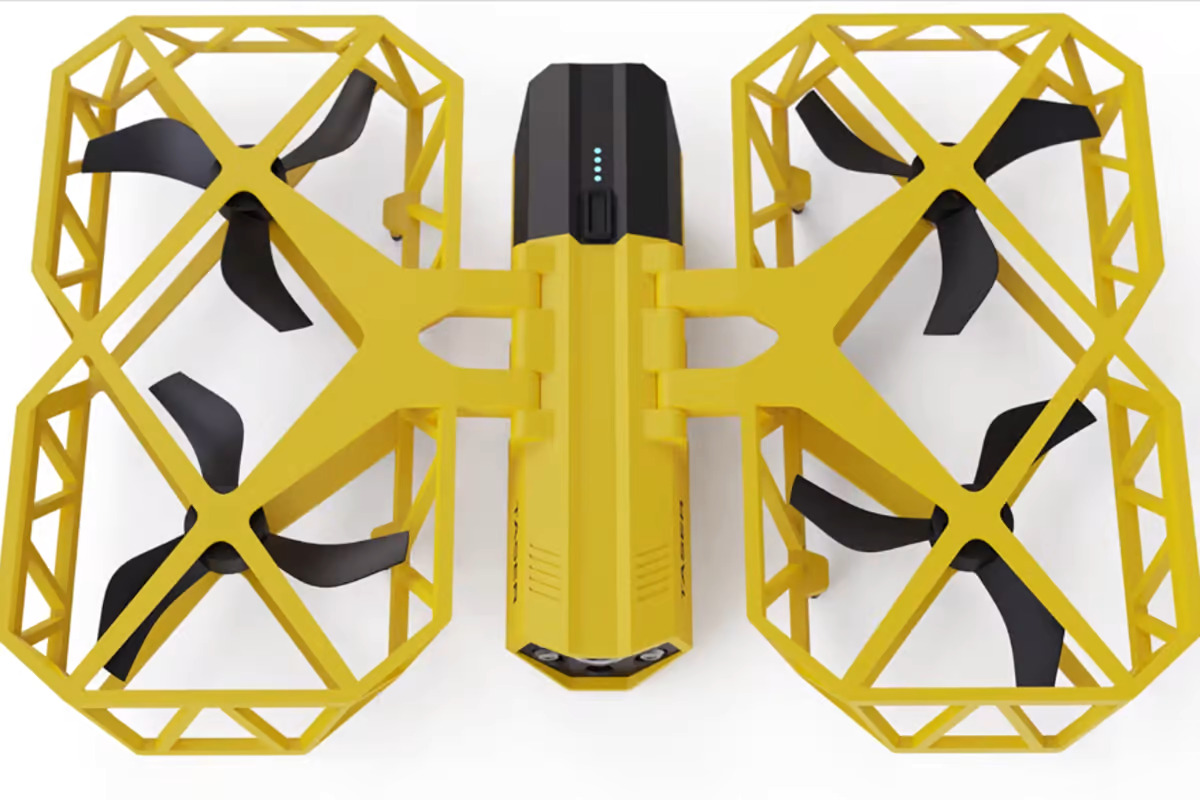 The drone will be part of a system that also includes a network of security cameras, and VR training for first responders.  Axon

Axon, the Arizona-based firm that manufactures the Taser, announced its plans to develop the drone this Thursday (June 2nd).

Few details on the aircraft itself have been released at this point, other than the facts that it will be a remotely controlled quadcopter, equipped with one of the company’s drone-specific Axon Air video cameras and a miniaturized version of the Taser electroshock weapon.

The Taser works by firing two small darts, each of which remains connected to the main device by a thin wire. When those darts strike a person (such as an active shooter), they deliver an electric shock which disrupts the individual’s nervous system. Ideally, this just results in the person being temporarily incapacitated, although a number of Taser-related deaths certainly have been reported.

The drone will be part of a larger system, which will also include a network of security cameras – in schools, businesses and other locations – along with a VR-based training program designed to teach first responders how to deal with active shooters. It is hoped that this combined approach could ultimately allow authorities to “stop mass shootings in less than 60 seconds.”

Project partners include Fusus, which is developing the camera network, along with DroneSense, which is working on the real-time drone control system.

Ben Coxworth
Based out of Edmonton, Canada, Ben Coxworth has been writing for New Atlas since 2009 and is presently Managing Editor for North America. An experienced freelance writer, he previously obtained an English BA from the University of Saskatchewan, then spent over 20 years working in various markets as a television reporter, producer and news videographer. Ben is particularly interested in scientific innovation, human-powered transportation, and the marine environment.
–
–
5 comments
Sign in to post a comment.
Please keep comments to less than 150 words. No abusive material or spam will be published.
windykites – 2022 Jun 03 – 11:13 AM

Tasers are a lot less deadly than bullets. Many mass shooters end up shot dead, which is actually instant justice. Imagine the shooter suing the police for injury from the Taser.

In the state of autocracy I live in, this might become a tool for the government to use to control crowds it didn’t approve of.

Rusty Harris – 2022 Jun 03 – 12:56 PM
This will go over like a piece of poop in a punch bowl. Ok, I know what…let’s send an drone in and taser this ARMED
shooter. Ummm…chief? Won’t the guy with the gun, shoot at the drone?
Shhhhhhhhhhh it’s technology! It will work.

I hope future mass killers will be good enough to not operate from protected positions in high-rises, or behind barricaded doors the police are too cautious to break through, or in complex bad-visibility environments where there are lots of obstacles and it’s hard to figure out whom to tase. And that shooters equipped with multiple semi-automatic weapons won’t fire at the loud brightly-colored thing heading toward them.
Maybe while people are proposing dubiously-effective solutions we should consider modifying sprinkler systems to deliver some kind of chemical that would knock out everyone in a space under attack, thus eliminating the problem of figuring out who the evildoer is. (No, that’s been tried to disastrous effect.)
Derek Howe – 2022 Jun 03 – 07:55 PM

For this to not just get shot into pieces, it needs to be fast, in both recognizing the shooter, and taking the shot. If it’s just some guy with a controller looking at a screen, forget about it.
–