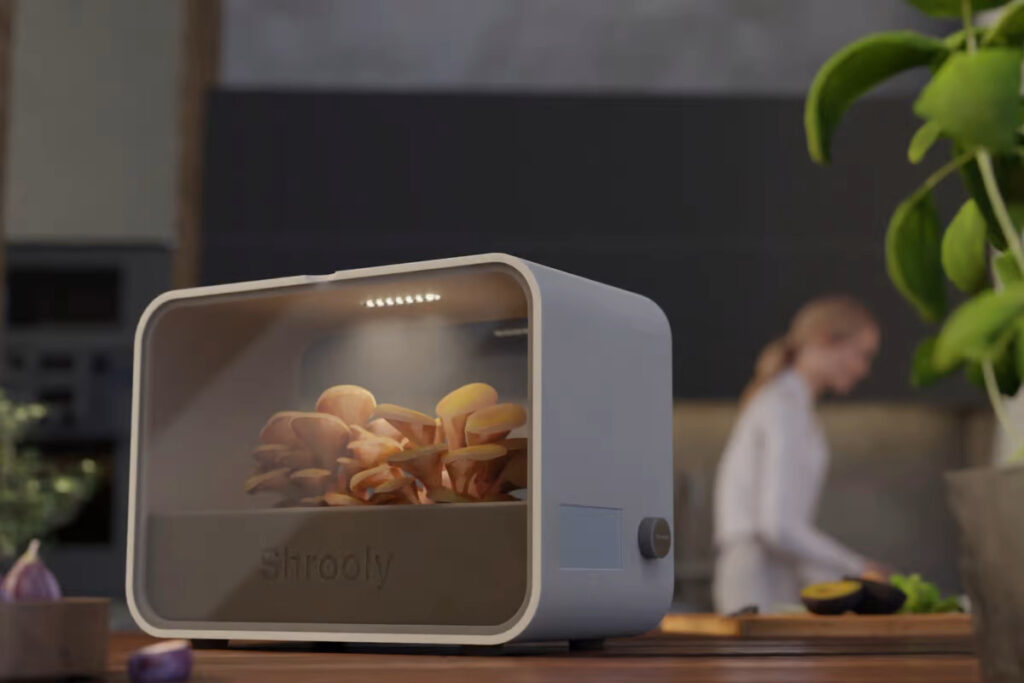 2022 Jun 06
–
Like most foods, mushrooms are best when fresh … but it can be difficult to grow them yourself. Shrooly is designed to help, by automatically providing the best conditions for pre-inoculated mushroom-growing pods.

Currently the subject of an Indiegogo campaign, the UK-designed Shrooly device itself features a physical switch and an e-paper display on one side, and can be controlled via a dedicated app. It works with pods supplied by the Shrooly company, which have been inoculated with the spores of different types of edible mushrooms.

Users start by placing one of the pods (also known as a fruiting block) inside the device, and adding some water. They then utilize the app to select the type of mushroom, after which they simply switch the machine on. It proceeds to maintain the proper humidity, full-spectrum light levels and ventilation, reportedly growing a harvestable crop of mushrooms in seven to 10 days.

During that period, the epaper display conveys information such as the temperature inside the device, and the estimated time left before harvesting can commence. Depending on the type of mushroom, each pod can grow between one and three batches.

Assuming Shrooly reaches production, a pledge of €279 (about US$298) will get you one – the planned retail price is €419 ($448) and the growing pods are $12 each. Potential backers might also want to check out the successfully crowdfunded Mella mushroom-growing system, which goes for $429.

Ben Coxworth
Based out of Edmonton, Canada, Ben Coxworth has been writing for New Atlas since 2009 and is presently Managing Editor for North America. An experienced freelance writer, he previously obtained an English BA from the University of Saskatchewan, then spent over 20 years working in various markets as a television reporter, producer and news videographer. Ben is particularly interested in scientific innovation, human-powered transportation, and the marine environment.
–
–
1 comment
Sign in to post a comment.
Please keep comments to less than 150 words. No abusive material or spam will be published.
Marco McClean – 2022 Jun 07 – 01:14 PM

“Boys, raise giant mushrooms in your cellar for fun and profit!”
–
–